Hermansson (21-5, fighting out of Oslo, Norway) hopes to make the most of his third UFC main event by stopping Holland’s momentum in highlight-reel fashion. Known for his devastating ground-and-pound, Hermansson has netted memorable victories against Kelvin Gastelum, Jacare Souza, David Branch and Thales Leites. Hermansson is now poised to defend his spot in the middleweight top five with another vintage performance.

Vettori (15-4-1, fighting out of Mezzocorona, Italy) steps on on short notice to replace Kevin Holland, and in the process hopes to take Hermansson's top 5 ranking and inch closer to a rematch with champion Israel Adesanya. Vettori is currently riding a three-fight win streak.

Other Bouts Of Note:

What time is UFC Fight Night: Hermansson vs Vettori?

Jake Collier returned to the UFC win column for the first time since November 2017, as he won a hard-fought three-round unanimous decision over Gian Villante in the heavyweight opener.

Both heavyweights were throwing bombs from the start, Villante bloodying Collier’s nose, but it was the Missouri product who landed even more telling blows, bruising up his foe’s leg with kicks and nearly dropping Villante with a left hook upstairs with a little over 90 seconds left in the opening round.

The second round remained competitive as the two fought at a punishing pace, but this time it was Villante leading, as his jab was on target throughout.

With the fight possibly up for grabs, Collier went out and got it in the third round, as he took advantage of Villante’s rapidly emptying gas tank to press the action, secure the final five minutes, and the fight.

Unbeaten featherweight prospect Ilia Topuria turned in a flawless performance against Damon Jackson, stopping the veteran in the first round.

Topuria dug to the body from the start, scoring well with both hands. And when he went upstairs, he bloodied Jackson’s nose before ending the bout with a left-right that sent the Texan to the canvas and brought in referee Mark Smith. The official time of the stoppage was 2:38 of round one.

Official Result: Ilia Topuria def. Damon Jackson by KO at 2:38 of Round 1

In a bantamweight bout fought at a furious pace, Louis Smolka pounded out a second-round TKO victory over Jose Quinonez.

Quinonez scored the first takedown of the bout in the opening 30 seconds, but Smolka scrambled back to his feet and began implementing his striking attack. Quinonez responded with several kicks to the leg and sharp punches to the head that utilized his speed advantage effectively. What followed were some heated exchanges, broken up by a pair of takedowns by the bloodied Smolka in the closing stages of the round.

A second Quinonez takedown kicked off round two, but again, Smolka rose quickly and got back to striking, primarily with body shots. In the second minute, Smolka put the fight back on the mat and unloaded with unanswered strikes as he took his foe’s back. Moments later, referee Jason Herzog had seen enough, halting the bout at 2:15 of the second round.

Official Result: Louis Smolka def. Jose Quinonez by TKO at 2:15 of Round 2 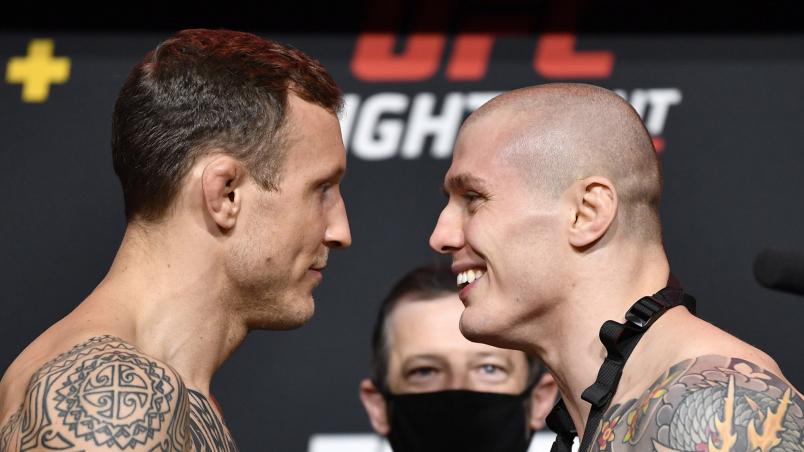 Recent Dana White’s Contender Series winner Jordan Leavitt made an immediate impact in his UFC debut, knocking out veteran Matt Wiman in the first round of their lightweight bout.

Leavitt looked for the takedown immediately, and as he did, Wiman locked up with his foe. But as Leavitt settled in to bring it to the mat, he slammed Wiman, knocking the veteran out immediately. The official time of referee Chris Tognoni’s stoppage was 22 seconds of round one.

Official Result: Jordan Leavitt def. Matt Wiman by KO at :22 of Round 1

Georgia’s Roman Dolidze went the distance for the first time as a pro, but he kept his unbeaten record intact as he won a three-round split decision over John Allan in a light heavyweight bout.

Dolidze used some high impact strikes to set up a takedown, but Allan stayed busy from his back, forcing the Georgian to be a little cautious until he attempted a heel hook just before the midway point. Allan got free, though, and he scrambled back to his feet, nailing his foe with a right hand and a sharp jab before upping his volume even more down the stretch in the first round. With 40 seconds left in the round, Dolidze and Allan clashed heads, Allan falling to the mat, and the two traded brief submission attempts.

Putting the fight back on the mat early in the second, Dolidze went to work, scoring with strikes as Allan tried to stay active. It was clearly Dolidze’s round, though, as he kept the Brazilian grounded until late in the stanza.

Allan put the heat on in the third, even scoring his own takedown with two minutes left, but Dolidze got up quickly and returned the favor moments later, leaving him able to run out the clock and wrap up the victory.

Lightweight veteran Gabriel Benitez returned to the win column for the first time since May 2018, as he halted Justin Jaynes in the opening round.

Benitez was sharp from the start, his kicks doing the most damage as the first round progressed. Jaynes fired back with his punches, raising swelling around his opponent’s eye, but it didn’t deter “Moggly,” who landed a crushing left knee to the body that dropped Jaynes to the mat. A couple follow-up shots later, and referee Mark Smith waved off the fight. The official time was 4:06 of round one.

Official Result: Gabriel Benitez def. Justin Jaynes by TKO at 4:06 of Round 1

Unbeaten light heavyweight prospect Jamahal Hill sent a message to his peers at 205 pounds, as he scored a second-round stoppage over veteran contender Ovince Saint Preux in the UFC Fight Night co-main event.

It was an interesting first round, with both Hill and Saint Preux mixing up their striking attacks and having their moments in a frame that was tough to call.

OSP started out strong in the first half of round two, but midway through, Hill began tagging the veteran with a series of hard right hands. Saint Preux weathered the initial storm, but Hill kept the heat on, and after landing a couple knees, he opened up with both hands. This time, there was no response from Saint Preux, and referee Jason Herzog stepped in and halted the bout at the 3:37 mark of the second stanza.

Official Result: Jamahal Hill def. Ovince Saint Preux by TKO at 3:37 of Round 2

Vettori’s left hand was on target throughout the first two minutes of the bout, and even though Hermansson fired back and landed, Vettori’s shots had more steam on them, and just before the midway point of the round, he dropped Hermansson with that same left hand. Vettori looked for a choke, but when that wasn’t there, he opened up with his strikes and stayed in control until the horn.

Hermansson came out fast for round two, and while he got a takedown, Vettori adjusted well and ended up in the top position. With 90 seconds left, the two stood, Hermansson landing the better shots until a late surge by the Italian.

Vettori slowed down significantly in the third, allowing Hermansson to pull ahead with his busier striking game. And while both fighters stood in the pocket and dared each other to land the finisher, Vettori reversed roles from the previous round, as he clearly scored the most effective blows heading into the final round.

Despite the grueling pace of the previous four rounds, both Hermansson and Vettori came out ready to wage war for another five minutes and they did just that, each throwing, landing and refusing to back down. The two went to the mat in the final seconds, but this one will be remembered for the phone booth battling that had fans on social media buzzing throughout.