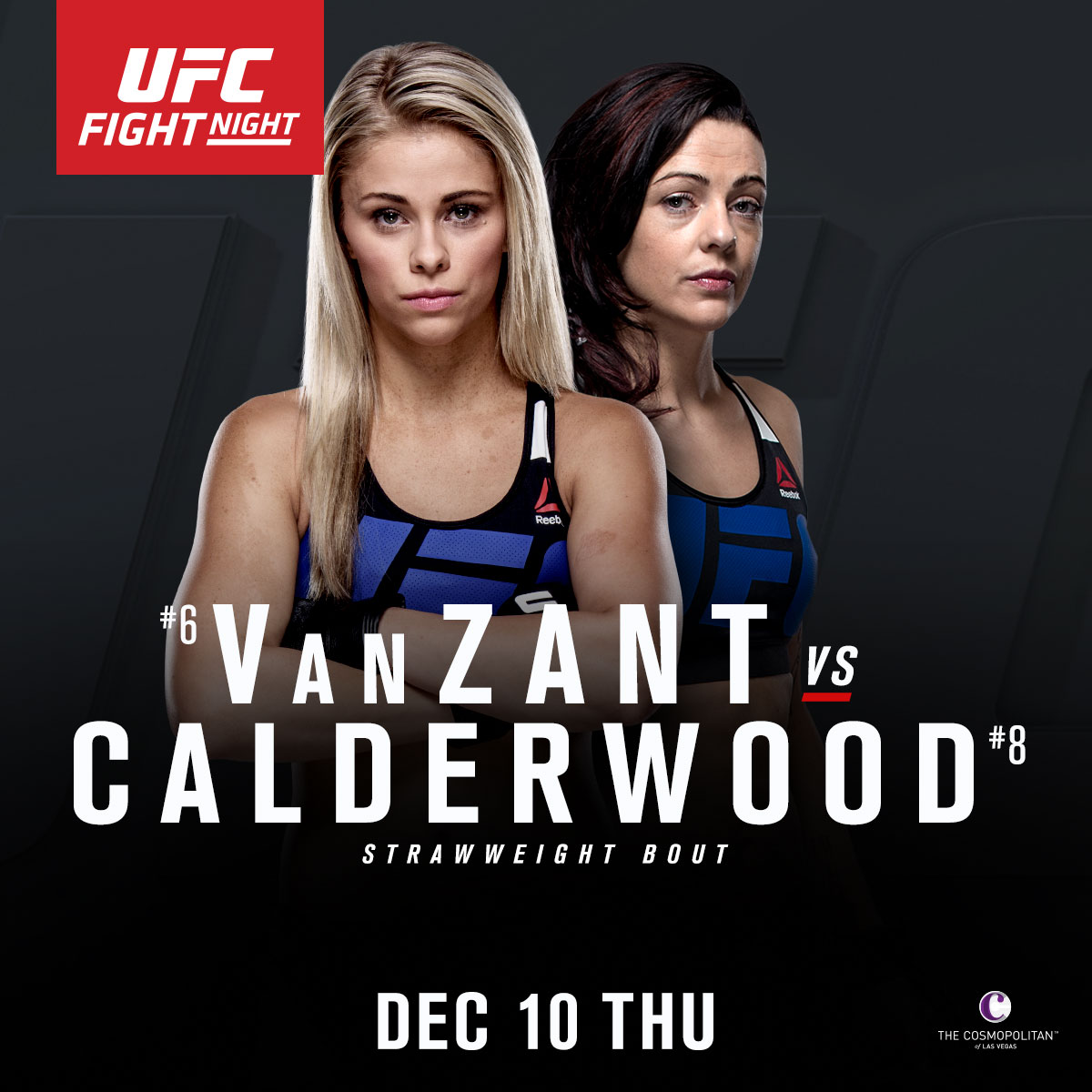 The Chelsea at The Cosmopolitan of Las Vegas will be the site for a hard-hitting UFC Fight Night event on Thursday, December 10 that kicks off three days of Octagon events. In the main event of the card, which will not only be the first United States card to air live on UFC FIGHT PASS, but the first in U.S. prime time as well, strawweight sensation Paige VanZant faces her toughest test to date in Scottish striker Joanne Calderwood.

One of the UFC's breakout stars of 2015, the 21-year-old VanZant has impressed in her three Octagon bouts, stopping Kailin Curran, decisioning Felice Herrig and, most recently, submitting Alex Chambers. The number six-ranked VanZant has never faced a striker like the number eight-ranked Calderwood though, and the former Ultimate Fighter 20 standout was in top form in July, as she won Fight of the Night honors for her victory over Cortney Casey.

Check out the Faceoff: VanZant vs. Calderwood collection now on UFC FIGHT PASS

Also added to the fight card Thursday were several intriguing matchups to get this triple-fight week off to a rousing start.

•    In the co-main event, The Ultimate Fighter 15 winner Michael Chiesa steps back into the Octagon to face New Jersey’s Jim Miller in what is expected to be an all-action bout between two UFC vets hungry for victory.

•    Fifteen pounds north at middleweight, TUF Brazil 3 heavyweight winner Antonio Carlos Junior keeps his 185-pound journey alive when he takes on another TUF alum in season 17’s Kevin Casey, with grappling fans sure to be pleased by this matchup of Jiu-Jitsu black belts.

•    Another rising star from Brazil, middleweight Thiago “Marreta” Santos, will likely want to keep the fight standing against TUF Nations winner Elias Theodorou, considering that he will be looking to top his Knockout of the Year candidate over Steve Bosse when he faces the Canadian prospect.

•    In a featherweight matchup, highly-touted Zubaira Tukhugov seeks his ninth straight victory against former Ultimate Fighter finalist Phillipe Nover, a New Yorker sporting an impressive streak of his own, as he is unbeaten for over two years.

•    And in women's strawweight action, the always-exciting Kailin Curran faces off with TUF 20 veteran Emily Peters Kagan in a bout that will see the winner emerge with their first Octagon victory.

Stay tuned to UFC.com for ticket info and in the meantime, watch VanZant vs. Curran on UFC FIGHT PASS. The bout will be available for free for the next 24 hours.