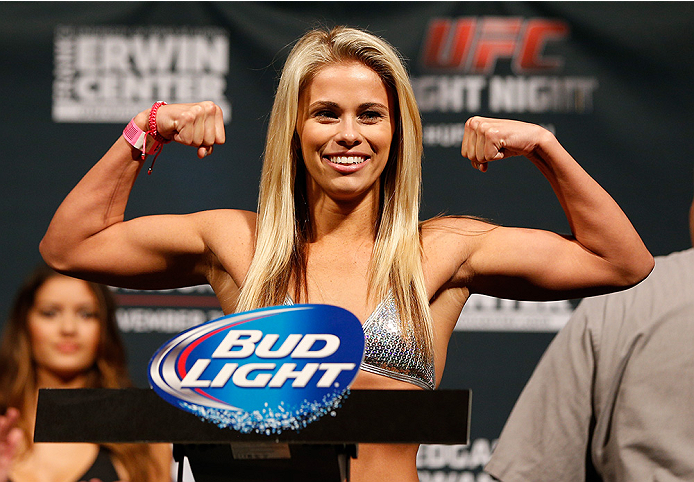 She used to be. In high school, for reasons she still doesn’t understand, VanZant was bullied by classmates. Kids can be ruthless, and the memories she has are ones she would rather forget.

“I didn’t get into MMA to be able to fight back, but I do have a lot more confidence now to know that I can.” -- Paige VanZant

But she’s only 21. Her freshman year wasn’t so long ago that the name-calling has drifted from her psyche.

“It wasn’t fun,” she says, and leaves it there.

What an amazing reversal of fortunes. The bullies are gone. VanZant is now a fast-rising star in the UFC, a relentless puncher with stunning good looks and a girl-next-door smile – a combination that has her marked for success if she continues winning.

Already among the most popular fighters in MMA, VanZant (5-1) will appear on the main card Saturday night when he takes on Alex Chambers (5-2) at UFC 191. She has no worries about being bullied in the Octagon.

Despite fighting just twice since joining the UFC in 2014, VanZant is ranked No. 7 in the strawweight division. Her reputation as an aggressive striker who likes to pressure her opponents has made her an attractive draw, and she earned her ranking with wins over previously unbeaten Kailin Curran (by TKO) and veteran Felice Herrig (by unanimous decision) in April.

“A lot of girls aren’t used to pushing the pace the way I do, and maybe I’m like that because of the training I’m getting,” VanZant said. “I get pushed in practice harder than I’ve ever had to fight. I’ve been hit harder than I’ve ever been hit fighting. I think that’s something that comes with my training style. I like to push the pace. I’m an in-your-face fighter.”

VanZant has been a member of Team Alpha Male in Sacramento, Calif., for the past two years, working with head coach Martin Kampmann and learning from experienced UFC fighters such as Urijah Faber, Chad Mendes and Joseph Benavidez.

At the gym, she’s treated as an equal – a teammate but also a little sister. She’s the only woman fighter on the team.

“Team Alpha Male is amazing,” she said. “I learn from every single athlete who’s in the gym. I have Chad, who’s super friendly, and he coaches wrestling often. He has so much knowledge. I’m learning from Chad, from Joseph and especially from Martin, who’s been around a very long time. They all share their knowledge with me.

“I don’t get in the ring with them. I don’t spar with them. But I do get their knowledge as far as coaching. They help me with technique, and they’ll slow drill with me.”

Kampmann is no fan of women’s fighting, but he’s been impressed by VanZant’s ability to improve in the year they’ve been together. Saturday’s bout will mark the second time he has worked her corner.

“Her biggest attribute is that she’s very tough,” Kampmann said. “She’s also raw, but she keeps improving all the time, and her skill set is getting better and better. It shows in her fights. She’s already shown that she’s dangerous in stand-up and she’s not afraid to brawl, but she also has submissions as well.”

Against Chambers, VanZant will be tested by a fighter with a background in karate and Brazilian Jiu-Jitsu. Chambers was a contestant on “The Ultimate Fighter: A Champion will be Crowned,” although she lost her first bout to Rose Namajunas.

“I know she’s tough and doesn’t give up,” VanZant said. “I’m definitely making sure I focus on her skills and that I train to be ready for whatever she throws at me.”

VanZant has had to be ready for anything thrown her way. Her parents moved from Oregon to the Reno, Nevada, area when she was very young, and she attended three high schools. At age 15, she began training at the urging of her father, who encouraged her to join him at Ken Shamrock’s Lion’s Den facility in Reno.

“My dad was a wrestler in high school and college,” she said. “He convinced me to try a class with him, and I instantly fell in love with it.”

"One person messaged me and apologized for everything that they had done." -- Paige VanZant

Being bullied didn’t spur her interest in combat sports, but VanZant said she gained a measure of self-confidence that she still carries with her.

“I didn’t get into MMA to be able to fight back,” she said, “but I do have a lot more confidence now to know that I can.”

Her story has clearly resonated with young girls, who frequently reach out to her to express their admiration.

It’s something she doesn’t take lightly.

“It’s really exciting, and it’s definitely what keeps me fighting,” she said. “I have a lot of young girls who message me on social media or come up to me and are excited to meet me. That melts my heart, the fact that I have young girls who are looking up to me. I want to be a huge inspiration for all women out there.”

VanZant’s story of being bullied in high school connects with many of her fans, she said. Not surprisingly, it’s something she hopes to share as she gets older and gains more experience.

“I have a lot of girls who say I’m an inspiration because they went through a lot of the same trials that I did,” she said. “It’s encouraged them to stand up for themselves or get into self-defense classes.

“I would definitely love to share my story with other young girls and go to high schools and show what effect it has on people. That would be something I’d love to get into, just to help people my age understand that what they’re doing really hurts people.”

The hurt lingers on both sides. VanZant said she heard from one of her tormentors, who reached out via social media to express remorse.

“One person messaged me and apologized for everything that they had done,” she said. “It felt good. Of course, it brings up memories of the past that are never fun, but it was nice to hear, I guess.”

At the moment, VanZant remains focused on her fight Saturday night at MGM Grand Garden Arena. Anything else – a likely rematch with Tecia Torres, who defeated her in 2013, or a title match with current UFC strawweight champion Joanna Jedzejczyk – will have to wait.

“I’ve heard a lot of people say they want me to fight for the title,” she said. “But I’m going to take my time. I’m only 21 years old, and I’m still relatively new to the fighting industry. This is my journey and I’m going to take it as slow as I want to.

“When it’s time for me to fight for the title, I’ll be ready.”

Michael Martinez is a longtime sports journalist and former staff writer at The New York Times, the San Jose Mercury News and FOX Sports. Follow him on Twitter at @ByMMartinez.