VanZant not distracted by rising popularity 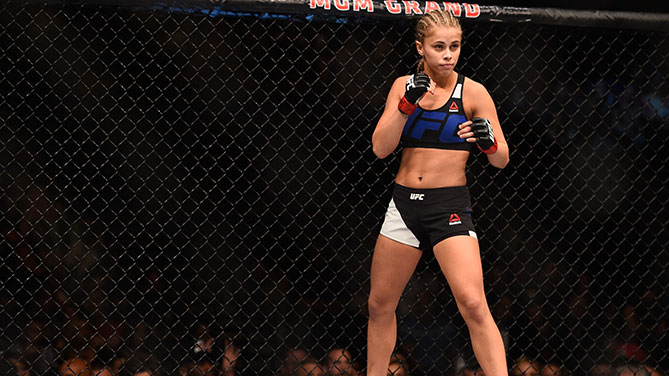 Paige VanZant has always been comfortable around the boys.

Back in middle school, VanZant, a tomboy with a wrestler for a father, used to take part in backyard boxing matches with all the boys on the street. Even her boyfriend at the time had to mix it up a bit to stick around.

Safe to say that she's always had a fighting spirit.

“I just was a fighter,” VanZant told a small group of media members Thursday afternoon at The Overlook Grill inside The Cosmopolitan in Las Vegas. “I was always aggressive, and I have a temper.”

With that personality assessment in mind, it’s easy to understand why VanZant has made Team Alpha Male her home. The Sacramento-based fight team, led by Urijah Faber, is known for its male superstars, including bantamweight champion TJ Dillashaw.

But these days, it’s VanZant who is garnering most of the attention. Next up for “12 Gauge” is another milestone when she faces Joanne Calderwood in a five-round fight on Dec. 10 in Las Vegas – marking the first main event for the rising strawweight star.

When VanZant returned to the gym for the first time since her UFC 191 win against Alex Chambers, the boys were quick to tease her about her continued ascent in the UFC.

“Of course they all have to give me their two [cents],” VanZant said. “TJ said, ‘Oh you’re too cool now because you’re a headliner.’ But everybody is super congratulatory and they’re excited to get me ready for the next fight.”

Calderwood presents arguably VanZant’s toughest test to date, especially in the stand-up department. The Scottish strawweight has a Muay Thai base and showed off her skills on season 20 of The Ultimate Fighter.

VanZant saw her compete on the show and said she is tweaking her training for Calderwood a bit to prepare for the high-level striking.

“I definitely think she’s going to be the toughest opponent I’ve ever faced,” VanZant said. “She’s known for her striking, but I have faced good strikers in the past. It’s nothing I can’t handle.”

There doesn’t seem to be very many things that VanZant can’t handle – at least through three fights in the UFC. Thursday’s media tour in Las Vegas is a perfect indicator as to how big a star VanZant is becoming, and the 21-year-old welcomes all the attention and pressure that comes along with high expectations.

“It seems I’ve been able to handle everything pretty easily,” VanZant said. “Normally I’d be enjoying some downtime, but instead I’m traveling doing media things. It’s fun and I enjoy this stuff.”

Inside the Octagon, VanZant has thrived. She is a perfect 3-0 and explained that when it’s time to fight the competitive side of her just takes over.

“There are a lot of people that are gym fighters. They’re the best in the gym but when they compete they can’t rise to the occasion,” she said. “When I compete that’s when I switch into the real competitor. I’ve always had that.

“It’s important to put pressure on yourself. Nerves are important. If you’re not nervous you don’t want it bad enough.”

No fighter in the UFC knows more about pressure than UFC women’s bantamweight champion Ronda Rousey.

The trailblazing Rousey has served as an inspiration and motivational figure for VanZant. Comparisons to Rousey have already begun, but VanZant is quick to remind everyone that she has a long way to go before she is considered as successful as Rousey.

“Seeing all these accomplishments that Ronda has achieved, it’s amazing to see that she keeps breaking these barriers. It’s nice to know and it’s comforting that those things are a possibility for me,” VanZant said.

“The fact that people compare me to Ronda I think is a huge complement. I don’t think I can make that comparison for myself yet because she has accomplished so much that I haven’t.”

On the road to the success that she seeks will eventually put VanZant across the Octagon from current champion Joanna Jedrzejczyk, who has run roughshod over the entire strawweight division before and during her reign at the top.

Jedrzejczyk is deserving of every morsel of hype she has been given, VanZant said.

“I think Joanna is great. I haven’t seen anyone on the radar right now that has the ability to beat her,” VanZant said.

But give VanZant some time. Her main focus is on Calderwood at the moment, but the title is always at the back of her mind.

“I’m fine with Joanna being the champ - until I get there,” VanZant said.