Because a lot of people feel like Paige VanZant was foisted upon them – declared the one to watch and the “next big thing” in the strawweight division – almost instantaneously following her first UFC victory, the narratives that have surrounded the 22-year-old fighter as she’s prepared to hit the cage have frequently carried a great doubtful tone.

While young talents are frequently put in a position to prove themselves against more established veterans, the questions directed at VanZant have rarely been about the caliber of opponent she’s about to face. Instead, they have often been questions seemingly designed to get the Team Alpha Male representative to declare, “You’re right – I don’t deserve to be here and my skills are lacking.”

Please note: if you’re waiting for VanZant to say something along those lines, get comfortable because you’re going to be waiting a mighty long time.

“Every conversation before each fight seems to be the same – that I’m not prepared – but that’s just what the media says,” says VanZant, who takes an “it doesn’t impact me either way” approach to constantly being asked to justify her place in the UFC ecosystem.

“I’m definitely used to it by now and I just don’t let anything that people say get to me. I’ve had a lot of haters in my life and I know that nothing they say means anything at all and that it’s just about those closest to you. I have a lot of confidence in my team. I have a lot of confidence in myself and I know I’m here for a reason. I was put in this position because I belong here.”
RELATED CONTENT: WATCH VanZant's classic head-kick KO against Bec Rawlings | Open Workout highlights | VanZant featured on Road to the Octagon

VanZant finds herself at No. 8 in the rankings and atop the marquee for this weekend’s final FOX event of the year, a hometown throwdown of sorts in Sacramento against the returning Michelle Waterson.

Saturday’s contest will mark her second headlining assignment and third appearance on the main card of one of four annual shows aired by the UFC’s network partner, and seeks to build on the excitement she generated in her last appearance on “Big FOX,” as UFC President Dana White likes to call it.

Matched up against Bec Rawlings in Vancouver at the end of August, VanZant brought the fight to a sudden halt just 17 seconds into the second round, flooring the former TUF 20 cast member with a perfectly executed flying switch kick before following up to earn the stoppage. 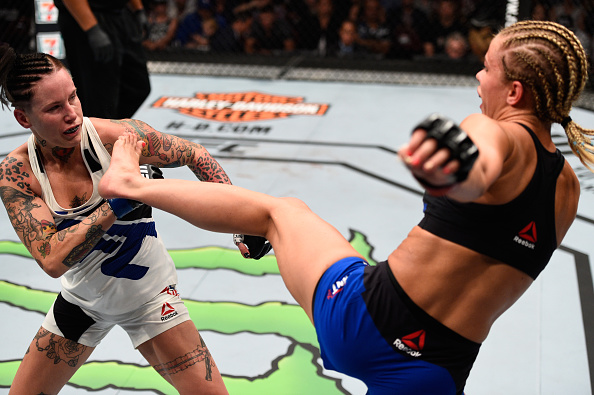 While it’s hard to say if it will earn Knockout of the Year votes when award season rolls around, it’s a finish that VanZant still gets excited to talk about and one that she believes speaks to her continued development as a fighter.

“That was 100 on a scale of 1-10; that one felt very good,” she laughs when asked to affix a rating to her Performance of the Night-winning effort. “I was so excited to get a finish like that; it meant the world to me.

“It just gives me more confidence in my skills knowing I can take my time and be a little calmer in the cage. I’m going into fights knowing I don’t have to kill my opponent in the first round; I have a little more pace behind me, unlike what you saw in my UFC debut, where I went in there to murder right away.”

When this weekend’s matchup was announced, Waterson was quick to give VanZant credit for her meteoric rise and success outside of the cage, but she told MMAFighting.com that she believes the woman she’ll share the Octagon with this weekend in Sacramento is still “very green in the whole aspect of fighting.”

While Waterson certainly has the edge in experience, entering the contest with a 13-4 record that includes a third-round submission win over Angela Magana in her UFC debut and a run atop the Invicta FC atomweight division, VanZant has logged three bouts since the 30-year-old Jackson-Wink MMA Academy product last stepped into the Octagon and believes she keeps getting better every time out, while still having a long way to go before she’s reached her peak.

“I just feel like each step I take, I’m learning more and maturing as a fighter and I think that shows in each fight that I’ve had,” VanZant says of her development. “I’ve gotten better and better, but at the same time, I’m just getting started.

“The ceiling is very, very high for me. I’m not even close to meeting my potential and I’m not close to reaching my ceiling and that’s something I get a lot of confidence from, knowing that I am learning a lot between each and every fight.

“I believe in myself and my fight camp, so that is all that really matters.”