If you thought lightweight prospect Lando Vannata made an impression in his UFC debut against Tony Ferguson, it was nothing like the one he made Saturday in Toronto’s Air Canada Centre, as he delivered a highlight reel knockout of John Makdessi in UFC 206 prelim action.

Both fighters were busy in the early going, trading techniques and looking for an opening, and Vannata found his first, firing off a seemingly effortless right wheel kick to the head that put Makdessi out immediately. Referee Todd Anderson stepped in immediately to stop the fight at the 1:40 mark of round one. 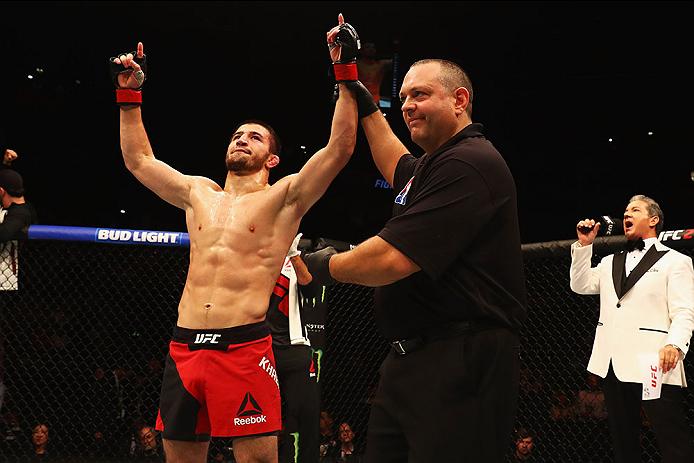 There wasn’t much significant action in the opening frame outside of a few hard shots landed by Khabilov that led to a takedown. But he wasn’t able to break through Saggo’s defense to capitalize on his dominant position.

It was a repeat for Khabilov in the second, but amped up slightly, as he landed two takedowns and had even more success on the feet, and the third held no other surprises, as Saggo was competitive but not enough to take the win, which went to Khabilov via scores of 30-27 across the board.

With the win, Dagestan’s Khabilov, who came in overweight for the bout at 158.5 pounds, improves to 21-3; Prince Edward Island’s Saggo falls to 12-3.

Dustin Ortiz was on point from start to finish in his flyweight opener against Zach Makovsky, winning a three-round split decision over his No. 7-ranked opponent.

In a grappling-heavy first round, it was the aggressive Ortiz holding the edge, but in the second, it was Makovsky pushing the pace, even though that played right into the hands of Ortiz, who was able to improve his position on the mat and take his foe’s back midway through the frame. With 1:20 left, Makovsky got free and back to his feet, and while he scored a takedown, Ortiz scrambled out of trouble and took over once more.

Makovsky got a takedown in the second minute of the final round, but he wasn’t able to do much with it before the two rose, and the pattern of the fight remained the same, with Ortiz having an answer for everything Makovsky threw at him.