Vannata excited to show the world his improvements 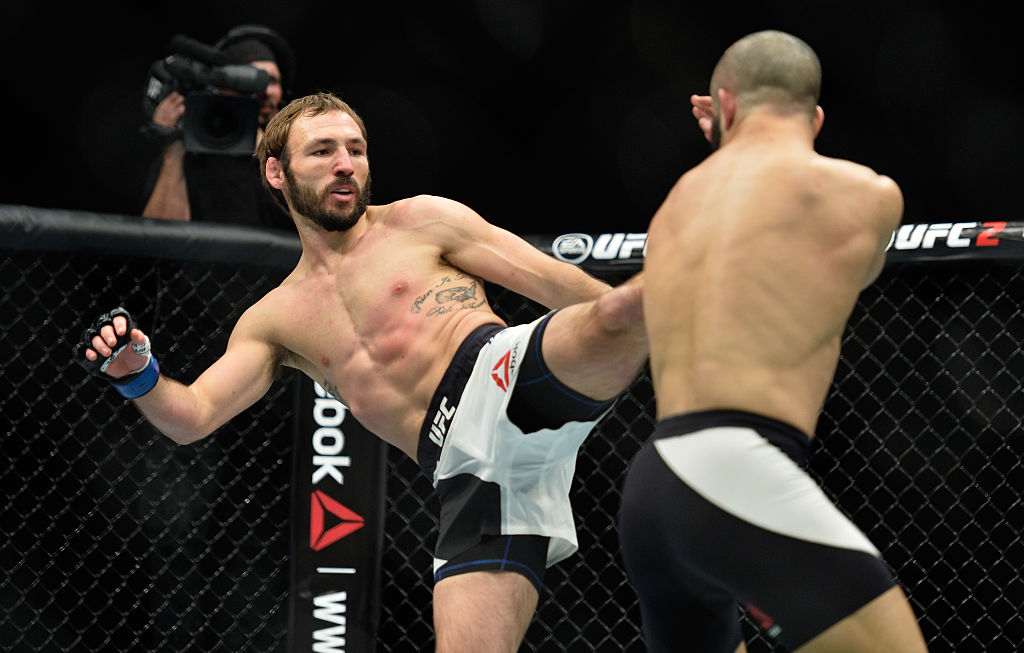 A year ago, Lando Vannata had just gone from unknown to UFC fan favorite in the space of a seven minute, 22 second Fight of the Night with Tony Ferguson. Today, the 25-year-old is getting ready to be on the same UFC 216 card as the man fighting for the interim UFC lightweight title, as he engages in his fourth Octagon bout against Bobby Green on Oct. 7.

So what’s the “Groovy Lando” assessment of UFC Year One?

“I think it’s been great so far,” he said. “I had the loss to Tony, but I don’t consider it a loss. I came in on two weeks’ notice, no training, no preparation. Then I had a spectacular knockout over (John) Makdessi and that put me on top of the world in my mind. It was the best feeling in the world I ever had. And then with the David Teymur fight, that was a learning experience. I feel like I beat myself. I didn’t prepare the way I should, I didn’t come in the best shape and I wasn’t the most efficient inside the Octagon that night. I’ve grown so much from it and I’m really excited to get in there again and show that growth and evolution to the rest of the world.”

There’s not much, if anything, to argue with there. Stepping in on short notice against Ferguson in July 2016, the then 8-0 Vannata nearly finished Ferguson in the opening round before getting caught and submitted in the second. The pair earned Fight of the Night honors for their efforts, and all of a sudden, everyone wanted to know who the New Jersey native was. Like he said, it wasn’t really a loss.
MORE FROM UFC 216: UFC 216: Ferguson vs Lee - Put Up or Shut Up | Order UFC 216 Here| Ray Borg - A Reason For Everything

“My confidence was through the roof after that fight,” he said. “Everywhere I went, people congratulated me on doing very well in a short notice loss, and I felt good about everything. Everything seemed to be coming together as I hoped it would, and I was just excited and ready to get on with the next one.”

That next one saw him land a wheel kick on veteran striker John Makdessi that ended their December fight in less than two minutes and net Vannata another bonus check. A decision loss to Teymur in March put Vannata’s UFC slate at 1-2, but with a Fight of the Night nod, the Jackson-Wink MMA product joined Yoshihiro Akiyama as the only two fighters in UFC history to begin their career with three consecutive post-fight bonuses.

That’s a pretty tough record to get, and one Vannata chalks up to attitude.

It’s no wonder Vannata is a must see in the sport’s toughest division. That doesn’t mean he’s emerged unscathed from his trio of UFC bouts, but he did learn some lessons in the last 14 months.

“I think the only difficult part was I spent too much time on the internet and reading what people were saying about me,” he laughs. “I had to learn from my mistake on that one. That was not a good idea. No matter how resilient you are, and I

feel like I’m pretty damn resilient to any criticism, it ends up getting to you sooner or later. Everybody wanted to see me fight, but there was still a lot of criticism. It’s one of those things where you can get 10 positive comments, but one negative one is the one that you remember. It’s weird how the human psyche works like that. But as soon as I cut that out, it hasn’t been a problem at all.”

In fact, the only problem facing Vannata now is the talented, but erratic, Green, because no one knows which version of the Californian will show up at T-Mobile Arena next week. But according to Vannata, that’s not a problem at all.

And Vannata plans on doing a lot in Las Vegas.

“I’m doing good, doing the best I ever have in my entire fight career,” he said. “After this last loss, my confidence was down a little bit. I was a little shook up from everything. Now I’m feeling great. I hired a strength and conditioning coach, a wrestling and grappling coach, and I gotta say I’ve never felt better in my life than I do now – mentally and physically - about my fight career.”