Getting to a UFC debut, even in the best of circumstances, can be a hectic time. Do it on short notice, like Vanessa Demopoulos is doing as she prepares for her Saturday bout against JJ Aldrich, and there’s little time to think, just a series of go, go, go moments.

Last Sunday, the newest member of the roster got a reminder about what’s important and why she’s doing this when she got a message from her mother.

“Your dad would have been proud,” she wrote.

James Demopoulos won’t be at his daughter’s first UFC fight, having passed away in 2019, but he is always in her heart. 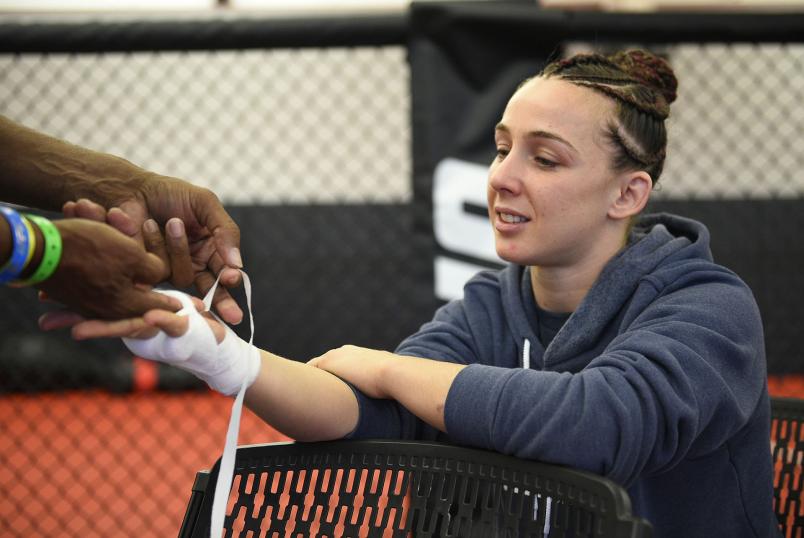 “My dad, he was my biggest fan,” she said. “I have a wall full of my medals and I was taking all of those medals and putting them in a bag. I didn't care; I'm just competing. My dad was the one who helped me hang all those medals up on my wall. He was the one that would be like, 'The champ is here.' That was his favorite thing. He was so freaking proud of me, and I miss him so much. He was my best friend.”

He should be proud, as it isn’t easy making it on the regional level of mixed martial arts, let alone the UFC, but after paying her dues, Demopoulos is here, and she couldn’t be happier, complete with a couple of ear-shattering screams over the course of this interview.

“I don't ever expect anyone to match my energy,” said Demopoulos, and it’s that energy that has made her a must see over the years and that many believe is going to help her become a star in the Octagon in the years to come. In fact, those folks were waiting for this introduction for the “Lil’ Monster” a year ago, when she fought Cory McKenna on season four of Dana White’s Contender Series. And while it was a good, competitive fight last August, the decision went to McKenna and Demopoulos was forced to regroup. 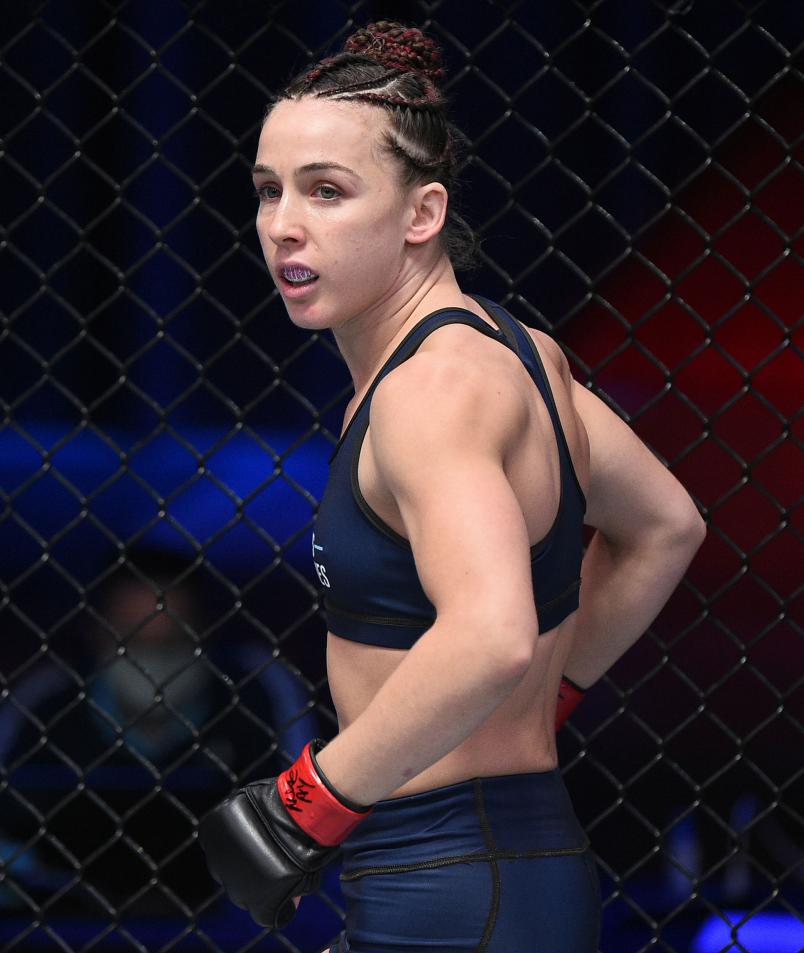 “I have a lot of energy, so unfortunately for people like my manager, I'm like, ‘Guys, I gotta go, I gotta go,’” she laughs. “Restless is a good word for it. So the whole year has just been sheer insanity: trying to get fights, trying to stay active, trying to stay engaged, and not really being able to get too many fights, and then I moved from Los Angeles. Now I live in Phoenix, Arizona, I changed camps, I changed everything about my situation, all with the focus of trying to be the best version of myself possible. And sometimes, that means making harder decisions, but knowing that they would pay off.”

Now training with the Fight Ready and Siege teams in Arizona, Demopoulos made the walk twice since the McKenna bout, going five hard rounds with Lupita Godinez before losing a majority decision in October of last year, then rebounding with a 37 second stoppage of Cynthia Arceo in March. She was scheduled to face Kathyrn Paprocki in an LFA bout tonight, but then fate intervened when her teammate Tracy Cortez withdrew from the Aldrich fight due to injury.

“For a while I've been keeping my fingers crossed and training hard – ‘Oh, I might get a call any day’ - and this just happened to be what ended up playing out and I'm really grateful,” she said.

“I was already engaged in peaking this week for my own fight in the LFA and I'm a very conditioned and disciplined person, so I was already on my Ps and Qs. And then to get a call like this, it was like God's Plan. It could not have been better timing for me when it comes to getting a ‘last-minute call’ when I was already engaged to fight anyway.” 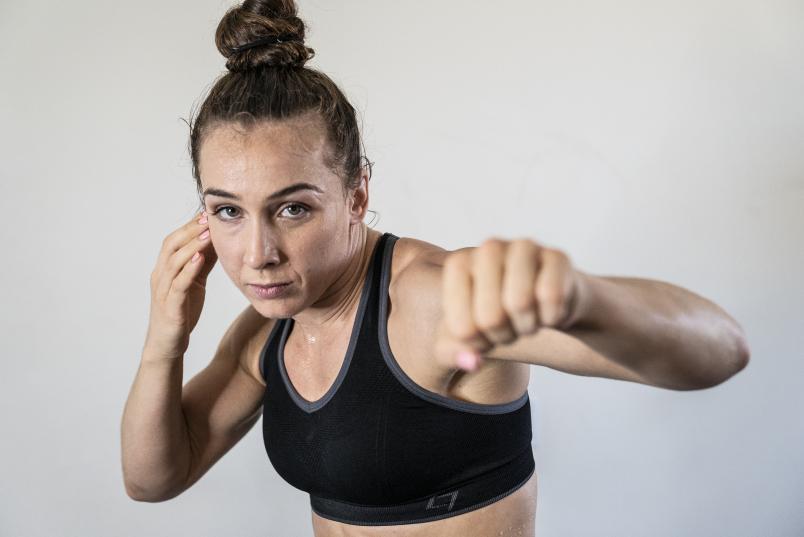 She even gets ten more pounds to play with as she will compete in the flyweight division at the UFC APEX in Las Vegas this weekend, but after the Aldrich bout, she will be returning to 115 pounds.

And so the journey begins, with the 32-year-old expecting to not only live up to the hype, but surpass it. She does have the tools to do it, both in and out of the Octagon, and Demopoulos is honest when asked if she was that kid who always wanted to be a star.

“I would look at people who were on TV, and I'm just like, they are no more special than what I am right now,” said Demopoulos. “As I sit here, in this house, I have everything that that person I'm watching right now has. The only difference is that they had the opportunity, and they had the training and the preparation to get to where they're at. I've always wanted this. I love doing this. And in fact, loving doing these parts and aspects is one of the things that my coaches have always hated about me because I love to be the personality because I have one. (Laughs) I love shining, I'm an entertainer at heart, and I love people so freaking much. And my coaches were always like, 'Vanessa, focus on fighting.' Which I do, obviously. But all of that stuff in between, I love it. I was born for this.”

She was, but she knows better than anyone that her personality and backstory don’t matter if she doesn’t perform on fight night.

“With every single fight, there's a whole journey that came along with that fight,” Demopoulos said. “But the facts are the facts, and the wins and losses matter. What took me so long to get here to the UFC is because of wins and losses. They didn't care about my battles, that I went five rounds with Lupita and my face looked like I just got out of an Edward Scissorhands movie, but I never even backed down a little bit. That didn't matter to them. What mattered was, what do the wins look like, what do the losses look like? In the Cory McKenna fight, that was a battle. I was throwing up submissions, I was going after stuff. I was beating her on the feet. When it came to the ground, I didn't have the position, but I was going through different submissions, but that didn't count. And they look at how many wins, how many losses. So as philosophical as I want to be about life, and as positive as I am about those losses, the facts are the facts and the numbers matter, so I have to pay attention to that more so than what I got to take away. But the takeaways are the reasons why my story is what it is.”

And a key part of that story comes from that win-loss record. At 6-3 as a pro, Demopoulos’ record doesn’t jump off the page at you, but look a little closer and you’ll see the names the jiu-jitsu brown belt has faced over the course of her amateur career.

As an amateur, Katlyn Chookagian and Cheyanne Buys. As a pro, her last three foes, Sam Hughes, McKenna and Godinez are all UFC vets. What does that tell you? The Lil’ Monster doesn’t back down from anyone, and if she’s still learning on the job, she’s doing it at the highest level.

“There's a big level of, I'm not scared of s**t, ever,” she said. “I don't mean to make it sound like something that it's not, but the facts are the facts. I'll go out there and I'll do some s**t. I think it comes from growing up and looking at those celebrities and saying, they don't have nothing I don't got. And I look at fighters in the same way. Everybody loses in the gym. I don't care who you are. You can be (UFC middleweight champion) Izzy Adesanya and he's losing in the gym sometimes. Everybody gets pushed, everybody gets pressured, and it's what happens inside that cage that makes the difference. And I've been through so much more in life situations growing up. I'm a very sweet person, I love people so much because of my perspective and because of the things that I've experienced in my life. And there's nothing that I will ever experience inside that cage that I haven't already overcome 17 different times in real life.”

If fight fans don’t know that about Vanessa Demopoulos, they’re about to. But her dad always knew, and she’ll never forget that.

“I have a coffee cup,” she said. “It was the last gift that I got him, and I use that coffee cup a lot and I even looked at it this morning, and I was like, ‘We're here, dad.’