Vanessa Demopoulos Is Staying True To Herself

Strawweight Vanessa Demopoulos Is Determined To Bounce Back At UFC 270: Ngannou vs Gane
By Thomas Gerbasi, on Twitter: @TGerbasi • Jan. 20, 2022

No, she didn’t expect to lose her UFC debut to JJ Aldrich last summer, but broken? Nah, not happening.

“People maybe thought that I was a little bit broken at the end when they called the decision because I hit my knees, but I wasn't emotionally defeated as much as it was like, 'F**k, man, all three judges thought I lost all three rounds,'” she said. “But I really did give it my all and I was gentle with myself after the loss. I've had tougher losses. It sucks, but I didn't even get hurt. I think that was the part that really upset me the most. I was totally fine. I think I was in the gym the very next day.”

And ready for the next call. The 33-year-old did compete in a pair of grappling matches in October, but as far as fighting goes, the “Lil’ Monster” had to wait until the new year to get her next bout in the Octagon. And then that fight with Silvana Gomez Juarez got pushed a week from January 15 to this weekend. But she’s here, she’s ready to fight back in her usual division at 115 pounds, and she’s had a full camp, to boot. So, it’s not too bad being Vanessa Demopoulos these days. Then again, the 33-year-old is always a lot more “glass half full” than most. Why? She’s following her passion – win, lose or draw.

“I've been doing this for so many years just off of pure passion and pure joy,” she said. “Of course, when you do something that you love, as some point it becomes a job, but I've not hit that point emotionally. It doesn't affect me in that way. I'm just so in love with everything and I'm always having fun. I think the hardest part for me is actually being serious, because I'm such an intense person that I'm either a hundred percent goofy or I'm a hundred percent serious as f**k. And probably for me the harder part is balancing being goofy versus being serious, more so than not enjoying it, because I enjoy it that much.”

If you’re not a fighter, a martial artist, or someone in the business, it might be hard to see how someone can enjoy shedding the amount of blood, sweat and tears the average competitor does in any given year. For Demopoulos, that wonder goes ten-fold when you consider that in the great scheme of things, she doesn’t have to do this. She’s not the down on her luck kid who is fighting to get out of a bad situation, or someone who was born into that situation with only her fists to set her free, as the stereotype goes. She knows it and embraces that reality. And she’s still here anyway. 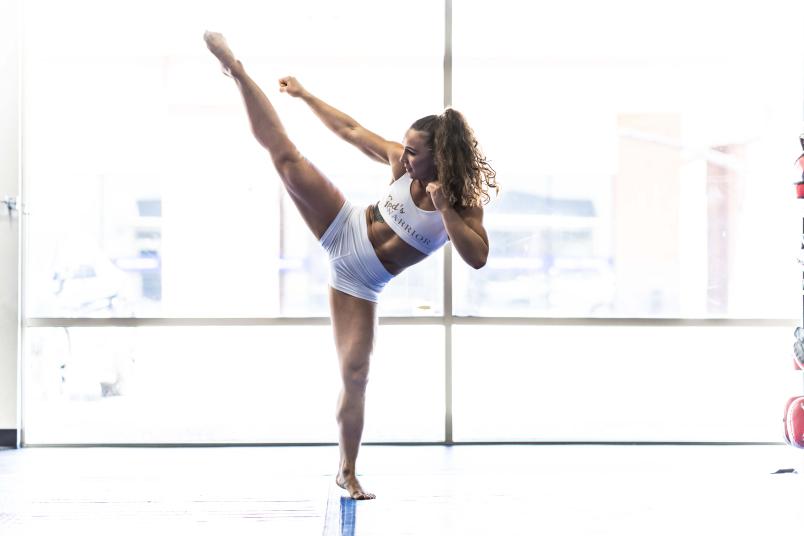 “I can say that I'm very well-versed in life,” said Demopoulos. “I'm extremely skilled in so many different areas of my life, which is such a blessing - and also a distraction because I can do so many other things, but I choose to fight. And I think knowing that is part of the reason why I'm still so in love with it. It's a conscious decision where I'm like, no, I love this that much. I can do anything else. I can go and be a public speaker. I can be an author, I'm really good at reading charts and trading stocks. I can do so many other things with my life. But I choose to put my heart and soul into being an athlete, and a fighter, at that. I had WWE as an option, I still have American Ninja Warrior hitting me up - I have a lot of options on the table for myself and I choose to be a UFC fighter. So, with that, I don't see this ever being something I want to be done with. I sacrificed for this and I chose this. I don't know how people get sick of it, I really don't. And I've seen those people, too, and I just don't get it.”

In 2021, all the sacrifices paid off when she stopped Cynthia Arceo in 37 seconds in a March LFA bout, setting the stage for a short notice call to step in for her Fight Ready teammate Tracy Cortez against Aldrich in August. Was it an ideal situation to move up to 125 pounds to face a UFC vet with a week’s worth of a training camp? Did Demopoulos care? Absolutely not. In fact, given that she was preparing for an LFA fight when she got the call and having experienced what it’s like on a UFC fight week when she fought on Dana White’s Contender Series in 2020, it wasn’t a bother at all.

“I fought on the Contender Series and that's just like being in the UFC without actively being on the UFC roster,” she said. “That was actually more alarming when I got the call for Contender Series because it was right after my title fight, I had three weeks to get my s**t together after I just fought four hard rounds, on top of flying out, doing the paperwork, doing all the photo shoots, flying back, trying to train. That was way more difficult than getting signed to the UFC officially.”

See, glass half full. But it’s not all sunshine and rainbows in the fight game, and the 33-year-old will be the first to tell you that hard times are part of the gig, especially on the way to the big show.

“I think I'm in a weird position because I don't have to do this, but I still suffer to do it,” she said. “I put myself into different types of financial crises in the past just because I chose fighting over other money opportunities. But this is what pays my soul, versus paying my pocket. There's different types of value, there's different types of success and the financial success, to me, that's only one area of your life. Who are you at the end of the day, when your life is lived, and you get to read that storybook back to your grandkids? Who were you? Were you someone who just lived in an office building and made shit tons of money, but you had no life, and you literally traded your life for dollars? I would rather trade my life for experiences. And that hunger is there because it's what my soul is craving, not what my pocketbooks are, and I think that's more powerful than anything in this world. Who are you? What's your purpose? What's your passion?” 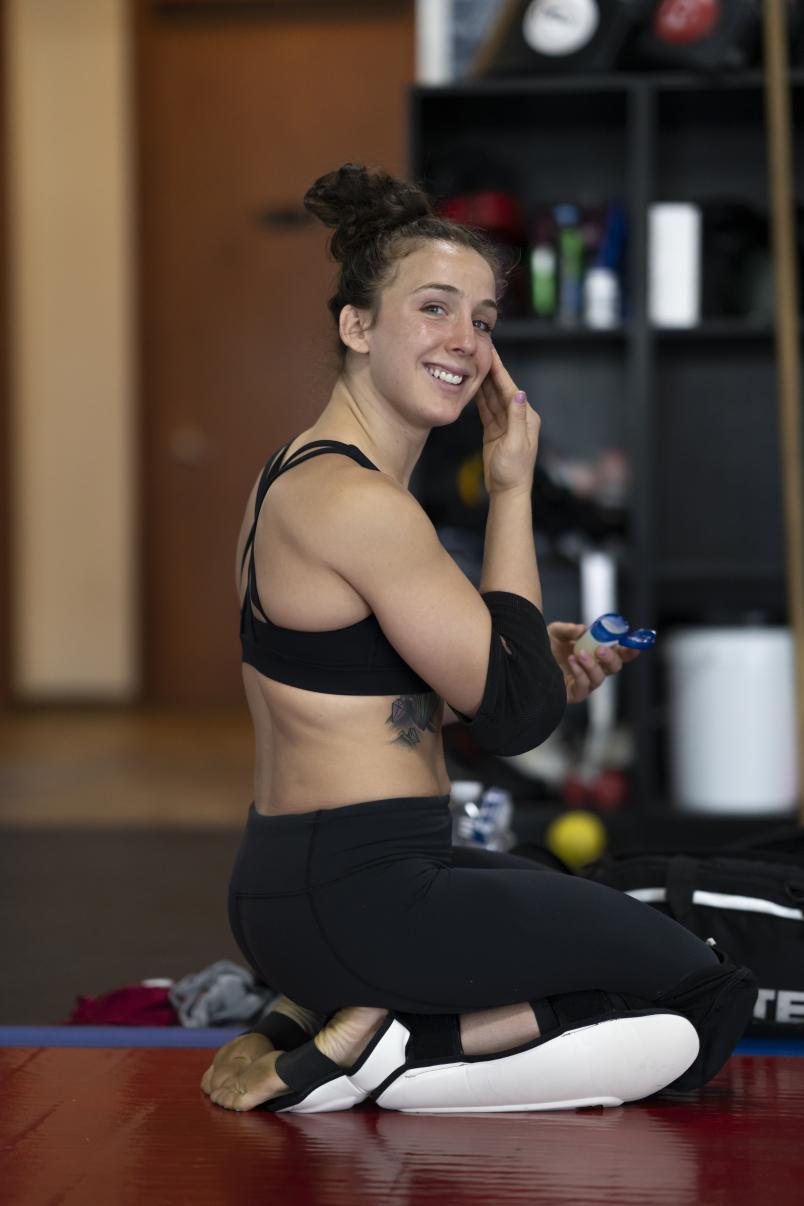 Vanessa Demopoulos is a fighter. Regardless of what happens against Silvana Gomez Juarez on Saturday, she’s proved herself just by getting to this point in her career and her life. But that’s not all she is. And that mindset is what keeps her grounded when the fight game throws curveballs at her.

“Understand that fighting is not your identity,” she explains. “It's not who you are, it's what you do. And I think a lot of people confuse that. Fighting is what I do, but it's not who I am. And that's why I hate talking about the unfortunate parts of the game, which are the losses I've had. And when those happen, I haven't sat down at a stool in a dark room with sunglasses on or cried myself to sleep at night because it's not who I am. It's what I do, it's what I love. And to know that who I am as a person is far more valuable than what happens in or outside of that cage, that's power. And I want other people to recognize that, that who you are is what really truly matters at the end of the day. Because successes will come and then they'll go, and you're left with yourself. And that's more important than the wins and the losses and whatever success you create inside the cage. It's the successes outside of the cage when you look inside the mirror at the end of the day.”