Vancouver rewind: What you got right & wrong

Demian Maia has been making a hard charge towards a shot at the UFC welterweight title, and it's going to be awfully hard to deny him after an incredibly impressive submission win over former interim champion Carlos Condit on Saturday night. 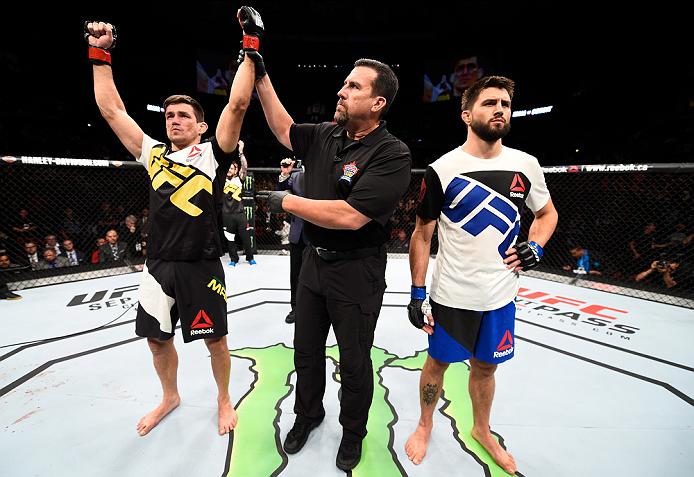 Maia had won five straight bouts coming into the fight, but he picked up his most important victory with a dominant performance in the main event from Vancouver.

Maia wasted no time getting Condit to the ground early and quickly wrapped up a rear naked choke as he got the tap less than two minutes into the first round. It was Maia's third rear naked choke submission victory in his last four fights.

Heading into the card, Maia was actually a huge underdog according to fantasy players, with only 29 percent picking him to get the win. Maia came through in a big way with his first round finish and he was a huge boost for the players who picked him along with the 68 percent who said he'd get the job done by submission.

In the co-main event, Anthony Pettis pulled off a very important win for his career as he made the move down to 145 pounds for the first time and submitted Top 10-ranked featherweight Charles Oliveira in the third round.

Despite his trio of losses coming into the night, Pettis was a heavy favorite with fantasy players after 75 percent picked him to get the win, although 59 percent thought he'd finish Oliveira by knockout. Still, Pettis came through in a big way, just like most fantasy players predicted him to do.

Another huge favorite going into the card was Paige VanZant, who returned to action for the first time since finishing as a runner up on the most recent season of "Dancing with the Stars". VanZant was picked by 82 percent of players and she came though with a spectacular second round knockout to finish Bec Rawlings for her fourth win overall in the UFC.

While 76 percent of players picked VanZant to win by decision, the 22-year-old Team Alpha Male fighter instead got her second TKO victory since joining the UFC roster in 2014.

In one of the biggest upsets according to the fantasy odds, Jim Miller got his second win over Joe Lauzon in a very closely contested split decision fight to kick off the main card on Saturday night. Only 18 percent of players selected Miller, but 58 percent of those who picked him said he would win by decision. Much like Maia, Miller came through in the clutch for the slim amount of players who picked him to win.

On the prelims, Sam Alvey was a big favorite, with 72 percent of players picking him to defeat Kevin Casey, and 71 percent saying he'd finish the fight by knockout. Alvey got the job done on both accords as he slammed home another jaw-rattling knockout to finish Casey in the second round.

Kyle Bochniak earned a very close, controversial split decision victory over Enrique Barzola after 62 percent of players picked him to win, while Felipe Silva made a very impressive debut against Shane Campbell after 60 percent of fantasy players had faith in the UFC newcomer to get the victory. Silva was also a nice pick up thanks to the bonus points added due to such a close matchup with Campbell going into the card.

Two more favorites got victories on the UFC FIGHT PASS prelims after Chad Laprise took out Thibault Gouti after 76 percent of players picked him to win, while Jeremy Kennedy earned a victory over Alessandro Ricci with 71 percent of fantasy participants selecting him to get the job done. Kennedy was another bonus fighter as well, with an added 40 points earned for picking him as a debuting fighter inside the Octagon.

Overall, only three underdogs came away victorious based on the selections made by fantasy players, so those wins were huge when it came to the final point totals at the end of the night.