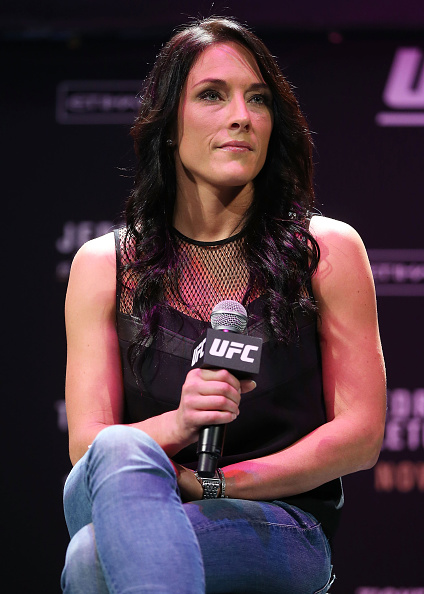 Valerie Letourneau is no stranger to making people cry, and she’s planning on doing it again this weekend when she challenges for Joanna Jedrzejczyk’s strawweight title in the co-main event of UFC 193.

It’s not a bad thing, though one would have to consult her previous opponents to see if any of them ever shed a tear after fighting “Trouble.” Yet as far as Letourneau is concerned, if there is crying in Melbourne, Australia, those will be tears of joy.

If you’re wondering how the topic of crying comes up in an interview previewing a fistfight in front of 70,000 people in Etihad Stadium, it’s because Letourneau is no mere contender. She’s a pioneer of the sport in her native Quebec, and actually the first female from the province to compete professionally in MMA.

But don’t think that such a development was welcomed at a time before Ronda Rousey broke the door into the UFC down in 2013. The 32-year-old Letourneau began kickboxing at 15, and she turned pro in MMA in 2007, pretty much the dark ages for women in the sport.

“At that time I was putting a lot of pressure on myself because I wanted to prove so bad that we could fight and we could put a show on like the guys and maybe even better than the guys,” Letourneau said. “I wanted my fight to look perfect, and I was thinking even more about that than the win. People don’t understand that I’ve been waiting for this for many years, even before I did the first female fight in the history of Quebec. I was training for a long time and people were making fun of us in the gym and it wasn’t taken that seriously. But to me, it was like I’m going there and prove to you that we can do it. And I shouldn’t have even focused on that; I should have focused on doing my fight. But this was how I was feeling at that time.”

Letourneau’s early career didn’t mark her as a future title challenger. She lost two of her first three fights, albeit to future stars Sarah Kaufman and Alexis Davis, and while she was determined to get better and become one of the best in the world, if that didn’t happen, at least she was able to say that she fought in Montreal’s storied Bell Centre.

By April of 2008, Letourneau still hadn’t competed in her fourth pro fight, but as she waited, she went back to Bell Centre to watch the first UFC event in the building, headlined by fellow Canadian pioneer Georges St-Pierre’s rematch with Matt Serra.

“I will never forget that time,” Letourneau said of watching UFC 83. “I was feeling very special that I had fought in that big place. When he (St-Pierre) fought there, I already fought at the Bell Centre two times before for TKO, and I was thinking how lucky I was that I had the chance to fight in such a big place. Because you go there and you didn’t realize how big the place is and how special it is until you watch somebody else doing it, and when Georges fought, everybody was standing up, and there was the noise and the lights, and I cried. I had seen Georges from the very beginning to there, so to see that was a very special moment. It was big.”

Not as big as this weekend, both personally and for the sport. When asked if she’s done more interviews for this upcoming bout than she has for all her previous fights combined, she laughs.

“Yes, maybe, and I still have so much to do,” Letourneau said on October 30, just three days before she left for Melbourne. “I have messages everywhere for interviews. I try to keep some times in my day for that, but my focus is on my training and my daughter now, and I’m leaving soon, so I’ve got to prepare for my trip. I’ll be there for three weeks, so I’ve got to make sure everything is fine. There’s a lot to take care of. It’s almost mission impossible.”

You get the impression that Letourneau thrives in such situations. She is a single mother of a 12-year-old daughter, so that alone proves her toughness, and her three UFC wins prove that she’s worthy of a crack at the title. But at this level of the game, it’s being able to handle all the miscellaneous stuff that separates the haves from the have nots, and Letourneau is doing well in the spotlight, even with a seemingly endless list of obligations to tend to on fight week.

“I try to enjoy it because there’s no point for me to fight against it,” she said. “I need to do it, and the only time it gets boring is because most of the time it’s all the same questions, so you feel like you’re repeating the same stuff, but they don’t know what you said to other newspapers. But this is where I want to be and I need to enjoy this moment, and even if I don’t like all the parts of it, I’m happy to do it.”

But has she thought about winning the title, and even more interviews?

“Yeah, I thought about that, and I’m such a big underdog for this fight, I can only imagine that it’s going to be a big thing winning this fight. But one day at a time. When I get there, I’m gonna do it.”

That’s all she’s concerned with right now. She knows how good Jedrzejczyk is and she knows that she’s not expected to win. Then again, she was expected to lose to the previously unbeaten Moroz in August and she went on to dominate the fight. So Letourneau isn’t too concerned with what folks who won’t have four-ounce gloves on their hands this Saturday night have to say.

“It makes it even more fun for me,” she admits. “All of that, I kind of like that position. It’s exciting for me because the way I feel right now, I feel in such great shape, and not that I don’t care what’s gonna happen, but I kind of don’t care what’s gonna happen. (Laughs) I feel so good, and this is such a great experience in my gym, in my life, and everything that I’m going to have no regrets when I leave the Octagon. No matter what happens. So I’m just going in there to do my best, but I feel at my best. And I’m going to give my everything.”

As for those tears, will they be flowing if she wins?

“I’m sure,” Letourneau said. “From girls in Quebec that are growing up in the sport, and also from those who have known me for years, who have seen me in the gym, working so hard and when nothing was moving. I failed so many times. I had a couple chances to sign with a big promotion and it was always missing a little bit, so I would say that even when I won my first UFC fight, I made those people cry.”