UFC Women's Flyweight Champion Valentina Shevchenko's Quest To Be The Best Will Continue In 2023 And Beyond.
By E. SPENCER KYTE, ON TWITTER @SPENCERKYTE • Jan. 7, 2023

Don’t confuse Valentina Shevchenko’s absence from the Octagon as signs of complacency or ambivalence.

The flyweight champion has been itching for a fight, and hopes to get back into the Octagon as soon as possible.

“I wanted to fight in December, but it’s my understanding that it was hard to find an opponent,” Shevchenko explained on Thursday. “I’m just here, training all the time, almost every day, waiting for the call. I’ve been ready since I don’t know — since September?

“If they call me tomorrow, I’m ready tomorrow.”

Shevchenko last competed in June, coming away with a split decision win over Taila Santos in what was her toughest title defense to date. The UFC 275 co-main event began terribly for the flyweight titleholder, but over the final three rounds, the 34-year-old champion was able to right the ship and do enough to escape with another victory. 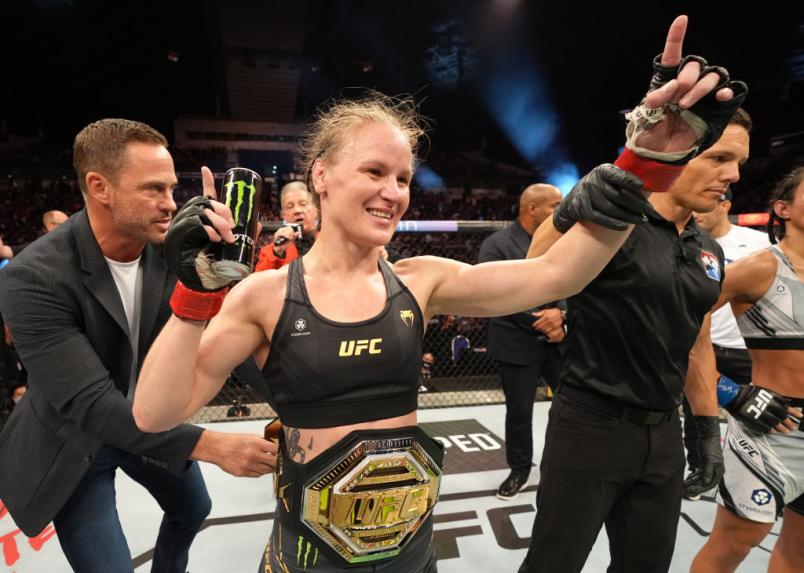 Valentina Shevchenko of Kyrgyzstan reacts after her split-decision victory over Taila Santos of Brazil in the UFC flyweight championship fight during the UFC 275 event at Singapore Indoor Stadium on June 12, 2022 in Singapore. (Photo by Jeff Bottari/Zuffa LLC)

Some wondered if an immediate rematch would take place, but that didn’t come to pass, and determining who could potentially be next in line was held up until October, when ascending contenders Alexa Grasso and Manon Fiorot won critical bouts on consecutive weekends.

Grasso out-hustled Viviane Araujo in the main event of a Fight Night show at the UFC APEX, pushing her record to 4-0 since transitioning to the 125-pound weight class. The following Saturday in Abu Dhabi, Fiorot earned her fifth straight UFC win and 10th consecutive victory overall by defeating Katlyn Chookagian in the UFC 280 main card opener.

“I want to fight frequently, but I realize this is a problem for the UFC to find opponents in order for me to fight frequently,” said Shevchenko, who had fought twice per year through her UFC career prior to 2022, where she competed just once. “My understanding is that everyone would love to fight for a title, so what’s happening with you girls? Why so quiet?”

When informed that Fiorot underwent knee surgery following her victory at the end of October, the champion, who dealt with knee issues of her own a couple years back, wished the French contender a full and healthy return to action later this year, and then turned her focus to Grasso. 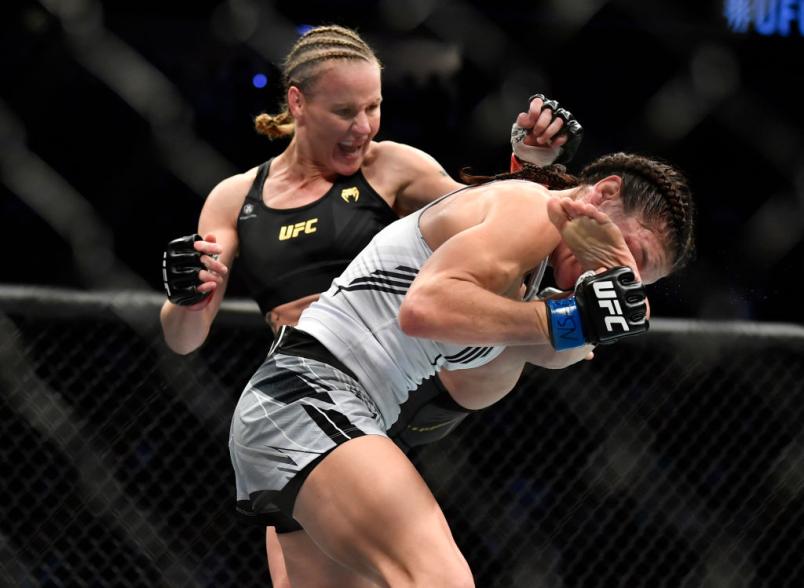 In an era where champions have regularly looked to hunt out the most lucrative and marketable matchups possible, Shevchenko has always taken a “next person up” approach built around her readiness.

Rather than waiting until her ideal opponent materializes, the “fighting champion” believes that when she’s ready to step into the cage, whoever is keen to stand across from her is more than welcome to sign the contract, cross the threshold, and try their best to wrest the flyweight title away from her.

Seven have tried and seven have failed, and Shevchenko is keen on taking on several more over the next few years, including potential clashes with fellow champions Zhang Weili and Amanda Nunes.

“The champion is ready, so just bring everyone who is ready,” she said with a laugh, acknowledging that she would like to compete on one of the pay-per-view events in March now that the other shows in the first quarter of the year are quickly filling up. “March sounds like very good timing. It’s already January and with all the holidays and New Year, it’s going to run so quickly. March is good timing; it’s kind of perfect.

“And I would say that I’m open to all opportunities,” she added. “I like the idea of all these potential challengers.

“After this break, I would like to defend my belt once more for the next one, but yes, I’m definitely ready for Amanda and Weili. Weili did a very good fight her last fight, she got stronger, and it’s very interesting to watch her fight. I’m definitely open to fight any of these girls.”

In addition to facing the current crop of contenders within the flyweight division and the potential to take on the titleholders from the strawweight and bantamweight divisions as well, Shevchenko is excited by the collection of young, emerging talents climbing the ranks in the 125-pound weight class at the moment. 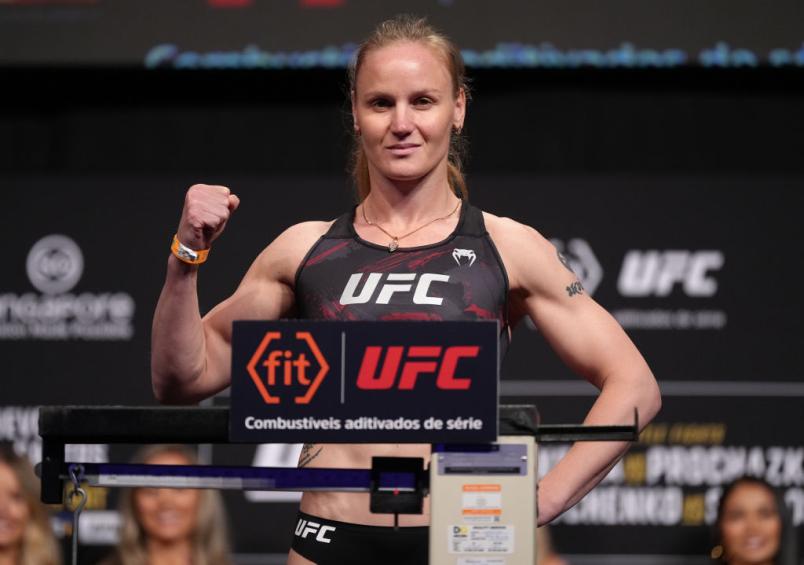 Valentina Shevchenko of Kyrgyzstan poses on the scale during the UFC 275 weigh-in at Singapore Indoor Stadium on June 10, 2022 in Singapore. (Photo by Jeff Bottari/Zuffa LLC)

From Erin Blanchfield and Casey O’Neill to Maycee Barber, Miranda Maverick, and Natalia Silva, there are a number of skilled, developing competitors scattered throughout the Top 15 and just outside the rankings all moving forward in hopes of one day sitting in the throne Shevchenko has occupied since winning the title at UFC 231.

And the current longest reigning champion in the UFC is thrilled to see the next generation making their ascent.

“It’s amazing,” she said when asked about the pack of young fighters climbing the rankings. “To see how the generations changed, but you are still there and you are the best? It’s an amazing feeling!”

Shevchenko laughed as she said this, playful on a Thursday afternoon while continuing to enjoy being home in her native Kyrgyzstan, and in great spirits overall.

Look Back At Some Of UFC's Most Historic January Finishes

Just as the UFC is celebrating its 30th anniversary this year, 2023 also marks 30 years of Shevchenko being a martial artist, and that longevity and her deep desire to continue competing at the highest level for as long as she can fills her with joy and excitement.

“1993 is when UFC had its first event, this is the year when I started to practice martial arts, so it’s 30 years of UFC and my anniversary of being a martial artist,” she said. “For me, being a martial artist, it’s showing that a person can stay fighting and stay healthy - mentally and physically - for a long time at a high level of competition.

“It shows a person can last long — that a professional fighting career is not only five years, 10 years, it can be whatever you want. The only thing is that you have to have the right control, the right settings. I want to show there are no limits. We’re the only people that put limits inside our heads.”

That’s why you’ll never hear Shevchenko talking about a specific number of title defenses she would like to amass or fighting until a certain age.

“The main reason I keep doing this for long time and it’s still enjoyable is that I’m not putting any numbers, any goals like that,” she said. “I feel that if a person starts to put goals or dreams or certain numbers in their head, once you reach that, they are kind of lost and asking, ‘What else?’

“The journey is most interesting. The process of the training, the championship — for me, this is most important.

“I know that I want to be the best, and I want to do the best I can to show my best; this is most important for me.”

And while she’s loved having a number of months to work on new techniques and add to her already expansive arsenal in the gym, Shevchenko is beyond ready to feel the pressures of fight week and go through the rigors of preparing to defend her title again.

“It was good that I had this quiet time, quiet moments where I’m not training for a fight,” admitted the champion. “When you’re in training camp it’s different — there is no time to add new techniques; it’s more shaping what you have already — but this time, I’ve been able to add more techniques to my arsenal.

“That part I loved, but I definitely need that busy feeling where it’s like, ‘There is so much pressure!’ I like this! This is what I’m really missing!”