Valentina Shevchenko started her training camp in Washington, where she lived on a boat for a few months, traveling from one marina to the next marina while getting some training in on the shore. Born in Kyrgyzstan, Shevchenko enjoys traveling to new places and getting train at new locations.

“Last winter, it was also a little bit more than two months from Las Vegas all the way to Memphis then going down and exploring the Mississippi River, Gulf of Mexico, all of Florida,” Shevchenko told UFC.com in a fight week interview ahead of her bout at UFC 266: Volkanovski vs Ortega. “I like this because I can see more of the United States and more of the culture, to see different states and how people live there. When you live in one place you think that all the countries are the same, but it’s not. It is so different, and every place has their own charm, and it is amazing.”

Heading into her sixth straight women’s flyweight title defense, the 33-year-old got some training help from another flyweight champion, Brandon Moreno. She stated that this camp was one of the hardest she has been through and the training session with Moreno pushed her to new heights.

With a victory over Lauren Murphy at UFC 266, Shevchenko would have the most consecutive successful title defenses of any current titleholder. That’s an accomplishment that many can’t say they hold, but the 33-year-old isn’t here to shatter records. 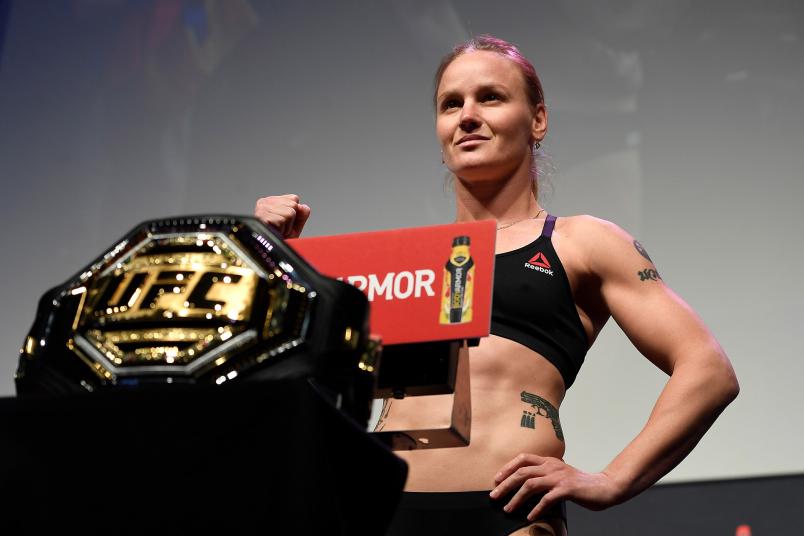 Valentina Shevchenko of Kyrgyzstan poses on the scale during the UFC 247 ceremonial weigh-in at the Toyota Center on February 7, 2020 in Houston, Texas. (Photo by Mike Roach/Zuffa LLC via Getty Images)

“I’m here to perform in the best way that I can and to have the life that I want,” Shevchenko said. “In every single fight, I want to show the best of me, the best martial arts, the best technique.

“That’s why I am preparing for it very seriously. I’m not taking any fight as it being an easy fight. I know it’s going to be a hard fight, that’s why I train harder to make it easier. That’s my philosophy and approach to the fight.”

As she steps into her fourth year competing at a flyweight, Shevchenko has been unstoppable, holding a 7-0 record at 125 in the UFC and becoming the second woman to win the title in the division.

“Bullet” is dominant in all areas and can switch to many different styles inside the Octagon. Her power in the UFC is something that people can’t seem to find a way to stop. When asked what makes her such a dangerous competitor to her opponents, she laughed and said, “I’m not sure.”

“I love the idea of mixed martial arts,” Shevchenko said. “It is a complete sport where you have to be everything. You can’t be just a standup fighter. You can’t be just a ground fighter. You have to be everything. No matter where the fight goes, you are going to feel comfortable there. That is what is motivating me every time to find something new, new techniques. I never stop finding something new to add to my fight game.”

It will be interesting to see what that “something new” could be this weekend against Murphy, a fighter that is riding a five-fight winning streak and competing in her first UFC title bout. Murphy has made it clear that she plans to be in Shevchenko’s face throughout the entire fight. But that doesn’t faze Shevchenko. Instead, it makes her laugh.

While she is aware that Murphy is a strong, complete fighter, Shevchenko knows where she stands and what abilities she must bring to defend her title. Being able to clearly establish the challenge she is going to face helps her elevate her game.

“You understand what it (the challenge) is going to be; that’s why you put more and more to give your best in the fight,” Shevchenko said. “I think when you start to underestimate your opponent, that’s when it starts to affect your performance and your preparation for the fight. But when you understand where she is good, where she is bad, nothing can stop you. You just understand everything, and you are there to finish her because you can.”

The UFC women’s flyweight title is on the line Saturday at UFC 266: Volkanovski vs Ortega. Don't miss it, live on PPV on ESPN+ on Saturday, September 25. The main card begins at 10pm ET/7pm PT