Urijah Faber is satisfied with his career but he knows he has plenty more in the gas tank. And he intends to keep adding chapters to his story.
By E. Spencer Kyte, on Twitter @SpencerKyte • Dec. 13, 2019

What a difference 46 seconds can make.

As Urijah Faber was readying to end his two-plus-year retirement this summer, the returning “California Kid” positioned his bout with Ricky Simon in his hometown of Sacramento as a personal challenge while leaving the door open for the possibility of future big name pairings down the road.

But after grooving his way to the Octagon with the familiar bass of “California Love” bumping through the Golden 1 Center and eating a good left hook right out of the chute, the 40-year-old Faber responded, landing a big overhand right that shook Simon’s equilibrium and opened the door for the hometown hero to secure his first TKO stoppage win in more than a dozen years.

Order UFC 245 to watch Faber and others put it on the line in Las Vegas!

“It was really fun; I enjoyed it,” Faber said of his return to the Octagon. “I had some great luck on top of good preparation.

Bolstered by his big win, Faber’s “let’s see what happens next” approach quickly shifted to a desire to resume his career full-go, leading to a multi-fight contract extension and a showdown with surging bantamweight contender Petr Yan this weekend in the opening bout of the UFC 245 pay-per-view main card.

While his performance against Simon, who entered their clash on an eight-fight winning streak, certainly helped shift his thinking, the veteran contender has never been one to make rash decisions, and his logic for jumping right back into the thick of the chase in the loaded bantamweight division is one he’s dissected from all angles.

More UFC 245: Amanda Nunes The "Goat" | Usman vs Covington Preview | Volkanovski on why he's the guy to beat Holloway | Preview the entire card Fight By Fight | GDR on being an underdog against Nunes

“I know I’m not going to be doing it super-long, so I’m really enjoying the process on every one,” said Faber, who made his professional debut in November 2003, when Yan was 10 years old. “As soon as I get the inkling that I want to step out, I’ll do it again like I did three years ago.

“I wasn’t enjoying it as much and I had a lot of other things going on,” he said, reflecting on his decision to walk away following a victory over Brad Pickett in December 2016. “In my time outside of the ring, I was really able to establish that I can make a living and do big things without the MMA career and now I get to jump back in before it’s too late because it will be too late very soon.” 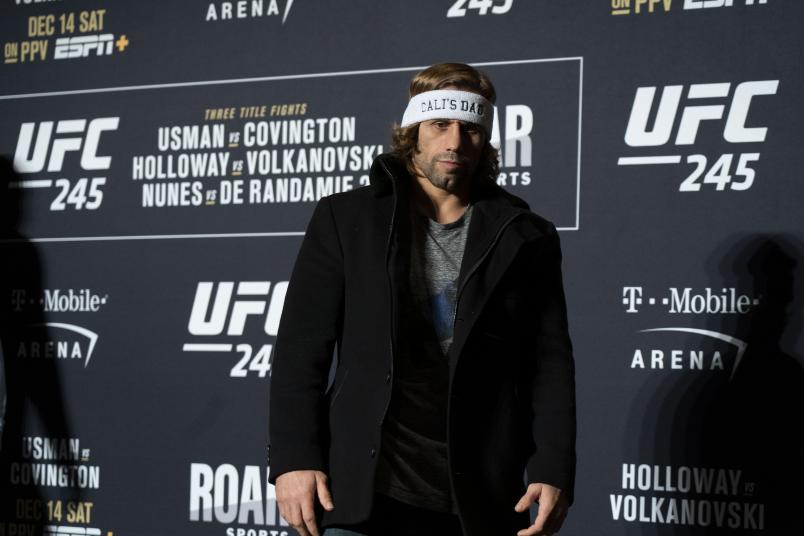 Urijah Faber speaks to the media during the UFC 245 Ultimate Media Day at the Red Rock Casino Resort on December 12, 2019 in Las Vegas, Nevada. (Photo by Jeff Bottari/Zuffa LLC via Getty Images)

In addition to focusing on his various business ventures during his time away, the leader of Team Alpha Male was also able to take time and reflect on his career inside the cage and gain some perspective on where he fits in the pantheon of all-time greats.

While some will always look at Faber and dock him for never wearing UFC gold, the thoughtful veteran sees this fight with Yan as a piece of a very unique career he’s been able to craft for himself.

“Before MMA was really a thing, my guys were Roy Jones Jr., Prince Naseem Hamed, Mike Tyson, George Foreman,” began Faber, who ruled the WEC featherweight division for over two-and-a-half years and carries a 35-10 record into his bout with Yan this weekend. “I remember when I was retired and looking at Foreman’s career I was like, ‘Holy s***, man — that guy fought for 30 years at the highest level because he was so skilled, so composed and he took it so serious and that was inspiring.

“If I fight Petr Yan now, I imagine he’ll be fighting for at least another 10, probably 12, maybe 15 years and I will have shared the cage with everyone from a Jens Pulver who was part of the early UFC to a guy like Yan. I could have touched the Octagon for a 50-year span and that excites me.” 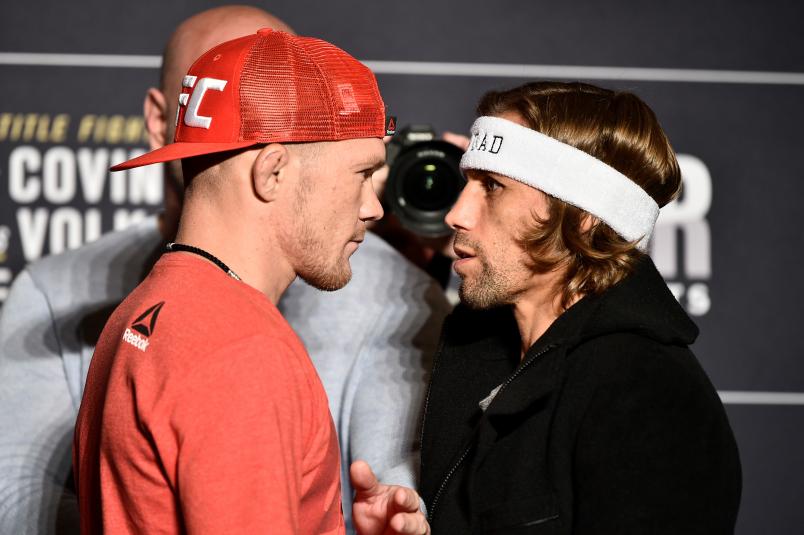 Petr Yan of Russia and Urijah Faber face off during the UFC 245 Ultimate Media Day at the Red Rock Casino Resort on December 12, 2019 in Las Vegas, Nevada. (Photo by Chris Unger/Zuffa LLC via Getty Images)

And it’s not like a championship opportunity is out of the question in 2020.

Current titleholder Henry Cejudo is still on the mend after undergoing shoulder surgery following his championship victory over Marlon Moraes, who returns to action against long-time featherweight kingpin Jose Aldo in the bout following Faber’s clash with Yan on Saturday night.

Though others like Aljamain Sterling and Cory Sandhagen are very much in the mix — with former champ Cody Garbrandt and upstart Song Yadong in the hunt, as well, as Faber is quick to note — the truth is that another strong showing from the veteran fan favorite on Saturday night could put Faber in a position to welcome Cejudo back to the Octagon when he’s ready to return next year.

“First off, I’m super-satisfied with my career — where I’ve been and what I’ve accomplished,” said Faber. “For me, this is still an opportunity for another great story.

“It’s an opportunity for me to attain something that I think is very important, but it’s never been about belts, per se. It’s always been about challenging myself to be the best because there have been times where I’ve lost belts and I thought I should have won and where I was a world champion, but they didn’t have my weight class in the UFC. 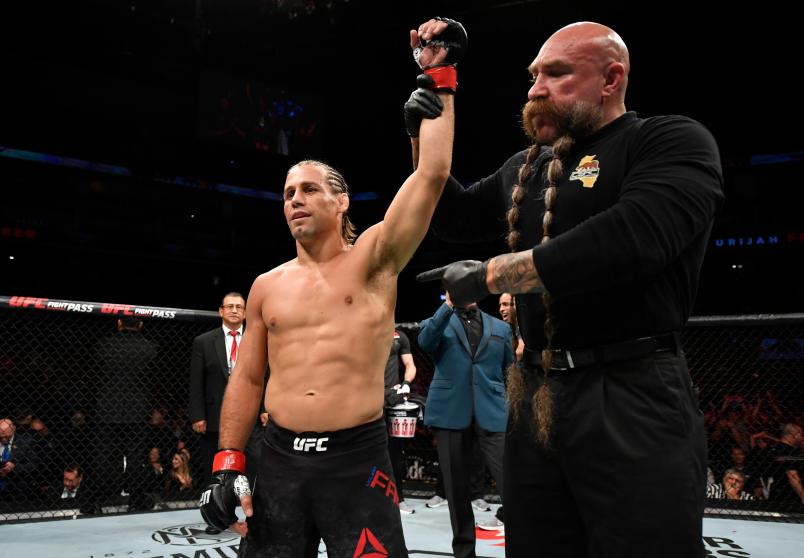 Urijah Faber celebrates after his victory over Ricky Simon in their bantamweight bout during the UFC Fight Night event at Golden 1 Center on July 13, 2019 in Sacramento, California. (Photo by Jeff Bottari/Zuffa LLC via Getty Images)

“I’m content with that, but when I’m doing something, I take pride in the fact that at any time in my career, I’m a threat to the title and one good day away from the title.”

After sporadically testing himself against the cast of all-stars assembled at his home gym in Sacramento and blasting his way through Simon in his return to Octagon in July, Faber is now ready to lock horns with arguably the hottest fighter in the division in the 26-year-old Russian.

“I see him as one of the top prospects in the world,” he said of Yan, who has collected five victories in as many starts since joining the UFC and owns a 13-1 record overall. “He has a boxer’s background, but with a wrestler’s mentality, which I respect a lot. He seems like he works really hard and likes to fight. He’s one of the best guys in the world.

“It’s an exciting time in the division, and any way you slice it, this is going to be a tough fight.”

And while he’s not one to look beyond the task at hand, the reality that another championship opportunity isn’t too far off and could be on the horizon with a victory on Saturday isn’t lost on Faber, and that fact seems to excite him even more than the potential for actually fighting for the title in 2020.

“I know that anything is possible in this world and that I can accomplish big things,” he said. “I know that although it might seem like a far-fetched thing to some people out there — becoming a world champion, especially at my age —to me it’s not; it’s super-close.

“It’s one match away from being a reality and I enjoy that outlook and that everything has combined to make me a guy that can be one fight away at 40 years old.”

What a difference 46 seconds can make.