"Barao is such an incredible opponent; I mean, he’s more dangerous, and he’s on a bigger win streak than anyone in the sport." - Urijah Faber 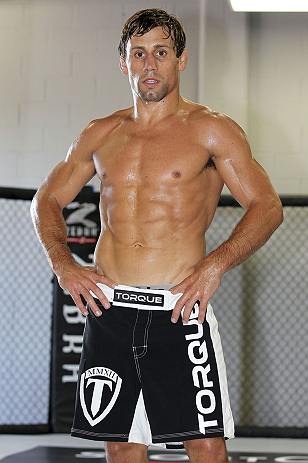 Don’t worry, fight fans: Urijah Faber has no intention of sitting on the sidelines with the interim UFC bantamweight title should he emerge from his showdown with Renan Barao on Saturday night victorious.

The concern, of course, stems from Carlos Condit’s decision to wait for a title unification fight with injured champion Georges St-Pierre after winning the interim welterweight title at UFC 143. Despite there being a collection of contenders at the ready, “The Natural Born Killer” has kept his focus on fighting St-Pierre, something many fans have questioned, but Faber is quick to defend.

“I’m definitely not waiting for anything,” laughed the charismatic 33-year-old when asked about his post-victory plans. “I’m not a waiter; I’m extremely impatient, and I like to fight. I don’t plan on waiting, but it’s up to the UFC; I’ll do whatever they tell me to do. If they want me to wait I will; I just kind of roll with the punches.

“I understand Condit though; it’s a huge payday for him to fight Georges St-Pierre, who is one of the biggest draws in the UFC, if not the biggest, so it makes sense for him,” suggested Faber. “Carlos has worked hard to get this opportunity, but that’s not the same case with me and Dominick. He’s not one of the biggest draws in this sport – I feel like right now I’m probably a bigger draw than he is, and there are a lot of tough opponents out there, so I don’t wait around for people.”

This wasn’t supposed to be how things played out this summer for the former WEC featherweight champion. He was supposed to be facing Dominick Cruz, his nemesis – the UFC bantamweight champion whom he coached against this past season on The Ultimate Fighter. They were supposed to meet in the Octagon with Cruz’s title on the line for a second consecutive year, first as the main event, and then as the co-main event on the annual Fourth of July weekend pay-per-view.

But then Cruz became member of the UFC M.A.S.H. Unit; the walking wounded forced to be removed from the summer schedule. Torn knee ligaments required surgery, and the prolonged recovery period prompted the organization to introduce an interim title and call up the surging Barao from a previously scheduled fight with Ivan Menjivar.

And then injuries shifted the plans again, moving Faber and Barao from the penultimate place on the UFC 148 fight card to the main event of the company’s debut even in Calgary, Alberta. Even though the change of venue threw a wrench into things, it should come as no surprise that the laid back “California Kid” is choosing to focus on the positives of all the changes instead.

“The one thing that is upsetting is that I had probably a thousand people that I know were there for me (at UFC 148),” admits Faber. “But I’m excited to fight in Canada. I think there are a couple of positive things, and I’m a guy that loves to focus on the positives. The Canadian fans have always been awesome. I’m super-pumped to be the main event, and I feel like the fight has the potential to be Fight of the Year with this opponent. There are a lot of great things with this fight. Also, the extra two weeks back home is kind of nice as well.”

As for not having the opportunity to resolve things with Cruz once and for all, Faber says it’s not something he’s concerned about right now.

“My focus is all about Barao. Dominick is someone I was forced to deal with because he was my opponent, he’s the guy that has the belt, but right now, I don’t really care about him. I’m focused on Barao, and if Dominick’s in my face again, we’ll deal with it then.

“Barao is such an incredible opponent; I mean, he’s more dangerous, and he’s on a bigger win streak than anyone in the sport. On top of that, I feel like I got the better of Dominick in the last fight, even though I didn’t get the judges’ decision, so that’s something that is to be determined on its own. I’m just looking forward to having a great fight with Barao, and getting that belt.”

In order to check “UFC Champion” off his personal “To Do List,” Faber must halt Barao’s 31-fight winning streak.

The Brazilian standout, who counts UFC featherweight champion and former Faber opponent Jose Aldo as one of his training partners, lost the initial fight of his career in April 2005 and hasn’t been beaten since, with a December 2007 No Contest the only result that has registered outside of the win column. Deemed a potential champion when he debuted with the WEC two years ago, Barao has lived up to expectations thus far, most recently earning a unanimous decision win over former title challenger Scott Jorgensen in February.

“You don’t want to take anything away from the guy – it’s incredible to have a win streak like that,” offers Faber. “It says that he’s mentally tough, and he’s well rounded as an athlete and as a fighter, but the bottom line is that I’ve been fighting for world championships since my third fight. Whether it be on Gladiator Challenge, King of the Cage, the WEC or the UFC, I’ve been fighting whoever they consider the best out there. That’s what I do, and I’ve got an impressive finish record, an impressive win-loss record, and I’m still at the top of my game. He’s not fighting any of those other guys he beat; he’s fighting me, and he’s not going to beat me.

“I’m going to have a conditioning edge and a comfort level in five-round fights that he’s not used to, on top of being a creative guy in the ring,” Faber says, adding that he feels there are more areas where he will have the advantage come fight night.

“I feel like the guys he’s beaten that are top level – guys like Cole Escovedo, Scott Jorgensen, and Brad Pickett – are all pretty straight forward fighters,” continues Faber, “and I can be able to trick you in there; have a little element of surprise and creativity. On top of everything else, that’s another thing that he hasn’t seen before.”

While he’s established himself as one of the biggest stars in the sport, a UFC title is the one thing that has eluded Faber to this point in his career. Saturday night, he gets a second chance to have UFC gold wrapped around his waist for the first time, and he doesn’t plan on squandering it.

“I have a lot of different ways to win,” he suggests. “I could KO, TKO, or submit him, outlast him for a decision. I don’t really know; I’m just predicting that I’m going to win. I’m not sure how, but I feel like I can go anywhere the fight goes.”