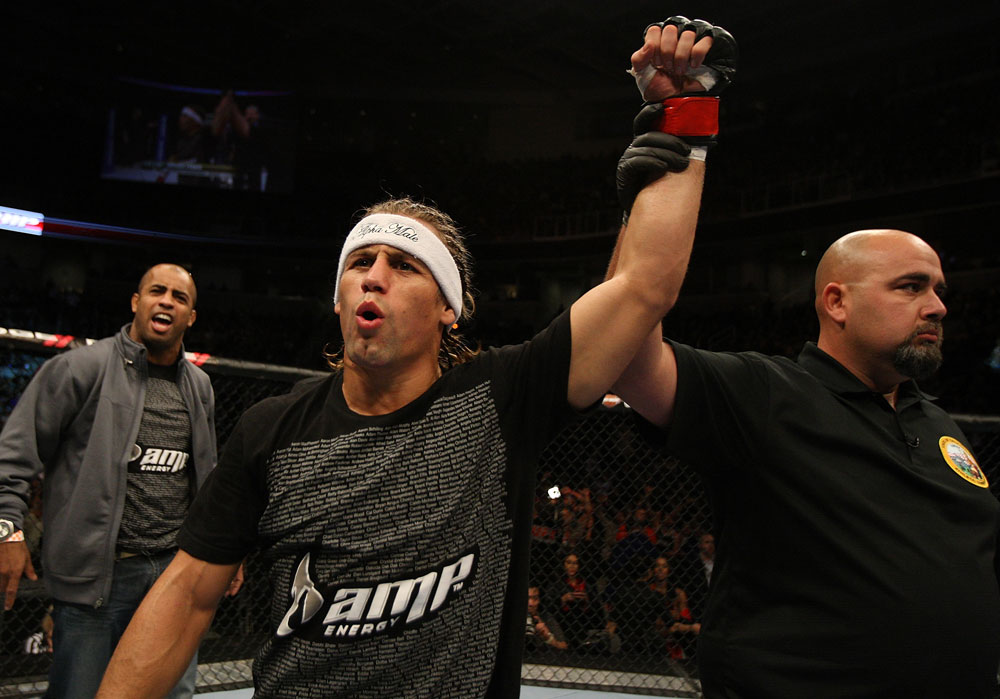 He’s been the driving force that brought some of mixed martial arts’ top talents into the sport, even going as far as to buy up several houses on the same block in Northern California so the members of his Team Alpha Male squad have a place to live near the gym.

So who better to start coaching the next generation of UFC hopefuls than Urijah Faber, the former WEC featherweight champ and current UFC bantamweight contender who is embracing his role on the 15th season of The Ultimate Fighter, which premieres this Friday on FX.

“I think it’s kinda like that in life,” says Faber, noting that his search for talent goes beyond what a person can do with four ounce gloves on. “I’m always looking to recruit guys. I don’t know what it is. I’ve always been kind of a leader when it comes to that stuff and kinda visionary also. So when I see guys with talent, I believe in them and figure hey, you might as well go for it. And it turns out that a lot of different guys that you think would be good at something, all they really need is a nudge in the right direction and a little encouragement, and things happen.”

You would be surprised how many fighters in the game today have gotten that nudge from Faber. There are the obvious ones, like Team Alpha Male standouts like Joseph Benavidez, Chad Mendes, and Danny Castillo. But Faber has also been the guy who suggested to Mark Munoz and Scott Jorgensen that they should follow up their college wrestling careers with a move to MMA. You would think that takes a pretty substantial lack of ego to do something like that, to bring in other talented people that could possibly take some of your spotlight away, but Faber disagrees.

“I think it’s kind of the opposite of being humble,” admits the 32-year old Faber. “I feel like I am a humble guy, but it’s more confidence that no matter who comes in here, I’m still gonna be okay. It’s not like I’m intimidated of other guys’ talents. I’ve got a book coming out May 22nd (“The Laws of the Ring: How Passion Runs the World”), and one of the themes is called “Building a Who’s Who Network.” It’s basically looking for potential in people and helping them reach big things. And when you do that, you’re basically creating a bunch of people that are Who’s Who people, instead of looking at someone and saying ‘I want to meet that guy because he’s famous or because he’s done this or done that.’ I try to find people with talent, and we all try to help each other get there, and then it means something when you have a network of people like that that accomplish something. I’ve got a bunch of friends in this sport that have basically been there from the beginning with me. You see me, Mark Munoz, Joseph Benavidez, Chad Mendes, Scotty Jorgensen, and all these guys, and people are like ‘oh, you know him,’ and I say ‘yeah, we helped each other get to where we are today,’ and that’s my network of people and it’s a real network.”

For the next three months, Faber has a chance to build that network from 32 fighters that will be whittled down to 16 this Friday night, and then to eight as he and his opposing coach, UFC bantamweight champ Dominick Cruz, select teams.

“I have taken a look at the guys so far and I feel like there are some favorites in there, but you’re not really ever gonna know until they’re right there in front of you and they’re fighting each other,” said Faber of the initial 32. “So I’m gonna keep an open mind, but I’ve definitely taken a look at them to see who I think are the better guys.”

To help Faber pick the right guys will be a full cast of assistant coaches and guests that, not surprisingly, call Sacramento their home base.

“Master Thong, Fabio Prado, Dustin Akbari, Justin Buchholz, Lance Palmer,” said “The California Kid” when asked about his TUF coaching staff. “And then my guys, Chad Mendes and Joseph (Benavidez) and Danny Castillo and TJ Dillashaw, they’ll be coming out to help out as well, and I’ll probably have some guests coming in, different specialists that will come in and add their two cents and give these guys some cool techniques and stuff like that.”

It’s the chance of a lifetime for the eight competitors who eventually end up on Team Faber, especially considering that the show has launched the careers of several UFC stars, including former champions Rashad Evans and Forrest Griffin. But what does Faber, an already established star, get out of being on the show?

“For me, I get a lot of exposure for myself, my team, my guys,” he said. “Three months is a long time, and every week you have a bunch of viewers watching us and seeing how we interact and who we are and stuff like that. But it’s also an opportunity to help out another group of guys. I’ve been a guy who’s been able to scout talent since I got in this game before it was even really popular, and I think I’m gonna be able to help out here as well, so I’m excited about that. It’s gonna be fun to help another group of guys reach their goals and do big things.”

The most interesting twist though, is that as Faber coaches, at the same time he will also be training for and getting a chance to get up close and personal with his old rival Cruz in preparation for their July rubber match. Now that’s something out of the ordinary for the nine year pro, but not surprisingly, he’s sure he’ll find a way to make it work for him.

“I’m not sure how that’s gonna be, and I can’t say that I’m excited about it necessarily, but it’s our reality for the time being and it should be interesting,” he said. “I’ve never been a guy that’s shaken by being in contact with someone I’m gonna fight, and it should be an opportunity to get in each other’s heads a little bit and see who can get a mental edge. And I think if anyone’s gonna have the edge in that category, it’s definitely me.”