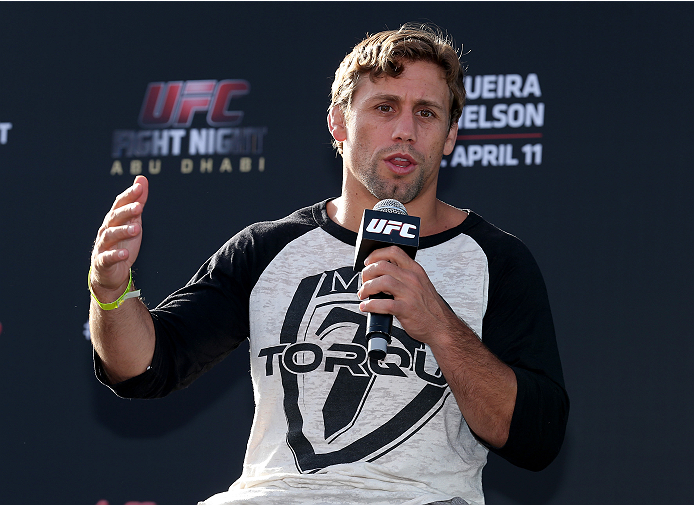 Despite appearances to the contrary, Urijah Faber isn’t happy all the time. I know, it’s shocking, but the “California Kid” with the megawatt smile is just like the rest of us – well, with the exception that the rest of us aren’t former mixed martial arts champions sitting among the elite in the UFC.

“Everybody knows that you can’t be happy and positive all the time,” said Faber. “There are things that bug you and bother you, and I’ve had to make some adjustments throughout the times when things have bothered me, whether they be monetary, or drama within our team or in our family or whatever. There’s all sorts of stuff that can get you down or beat you up and distract you, but I’ve had to make a conscious effort to make sure that I remember how lucky I am to be doing what I’m doing. And having a positive attitude is super important, but being realistic is also important.”

That mix of positivity and realism is precisely why Faber is where he’s at today in the sport. At 35, he’s still the number two-ranked bantamweight in the UFC, and despite losing 135-pound title fights to Renan Barao (twice) and Dominick Cruz, it’s not out of the realm of possibility that with a win over Alex Caceres this Saturday at UFC 175 in Las Vegas, he will begin the road back to a title shot. But more important than the physical work involved with starting another four-fight winning streak like the one that led him to his last championship fight against Barao in February is the attitude he has about what’s happened before and what’s ahead of him now.

Many believed he got an early hook from referee Herb Dean in the second Barao fight at UFC 169. So did Faber. But after answering the questions about the first-round stoppage, he simply moved on.

“There’s all sorts of things that happen,” he said. “The real true champions, you’ve got to ask Ronda Rousey or Chris Weidman or TJ Dillashaw or any of these champions how many times things haven’t gone their way and how many times they’ve got back up, dusted themselves off and kept going on the straight and narrow. That’s what a champion does and that’s what life’s about. What are you going to do, sit around and feel sorry for yourself all day or cut off your nose to spite your face and stop working hard because it didn’t work out? I just don’t have that in me and I learned that from my parents - who learned it from their parents - and the people I’ve been surrounded by. I don’t ever want to be a victim. That’s the worst thing, people feeling sorry for you. I’m not a victim. I’m a guy that creates my own destiny in this world. It didn’t go my way, there’s always a second chance. Until I’m off the planet, there’s a second chance.”

So when he was matched up with Caceres – who has a five-fight unbeaten streak but only sits at number 11 in the current rankings – Faber didn’t take it as an excuse to slack off or chalk this up as an instant win. He knows that “Bruce Leeroy” is talented and hungry, and with that said, he’s treating him with the utmost respect. That means he’s putting in the long hours with Team Alpha Male in Sacramento.

“I look at it (this fight) as real as possible,” said Faber. “The guy’s on a five-fight (unbeaten) streak in the UFC, which is at the pinnacle of mixed martial arts. He’s the best he’s ever been, he’s a big guy for the weight classes, he’s got a great attitude, he seems like he’s loving life, and he believes in himself. It’s a dangerous fight and that’s what I’m preparing for. It motivates me that this guy is bringing something to the table. He’s another human being that believes in himself, that trains just like I do, and I’m just going to go out there and make sure that I win. But I’m not gonna take him lightly.”

At this level of the sport, that’s a necessary mindset to have. Faber just doesn’t do it for self-preservation though. It’s also to set an example for his teammates, many of whom he brought into this sport and his team. And having done that, it’s no surprise that the members of Team Alpha Male are among the most accessible, affable, and professional fighters in the game. They can fight too, but when you can fight and be a pro, that goes a long way toward a successful future. And Faber knows it.

“I was a Human Development major in college and that’s all about people, and development, and families - from the womb until death - and I learned a lot from that,” said the UC Davis graduate. “Not only do I have a big family myself, but I learned lot about people and what makes them tick, and what causes success. And I feel like I’ve really been able to implement a lot of what I’ve learned throughout the years, through school, and through experience, and there’s a lot to it. It takes being somebody that gives and not just takes, and that’s the secret ingredient. I’ve been developing this bunch of guys and teaching them what I’ve learned and making sure they don’t make the mistakes I’ve made, and it does take a lot of work. That’s why not everyone can do it. But I’m pretty proud of what I’ve built.”

He should be, but you have to wonder, after likely fielding dozens of knocks on the door from prospective fighters over the years, does Faber have a secret formula to decide who the ideal Team Alpha Male fighter is?

“I don’t,” he admits. “What happens is, the cream rises to the top and we don’t really turn people away unless they’re really giving cause for it. Guys learn from example, and what I do create is an environment where people are excited and helping each other out and encouraging each other. Nothing is ever perfect, and anybody that has a family understands that. It may look perfect from the outside, but there’s always a little drama here, little things there, but the things that really count are unwavering support, and that’s something I’ve created and it’s a tough thing.

“My good friend Jim Peterson, we call him the Mind Coach, he says that if you want to talk to someone and they’re sitting on a bench, you can sit down and talk to him,” Faber continues. “If the guy gets up and starts walking and you still want to talk to him, you have to walk with him. If he starts jogging, you have to jog next to him if you want to keep that conversation going. And if the guy starts sprinting, you have to sprint alongside him. And that’s the mentality for our gym. You either keep up and you can handle it, or you can’t. We work hard, we have fun, and we do all that kind of stuff.”

When all is said and done, Faber is likely to earn recognition as a pioneer of the lighter weight classes and one of the most important figures in the history of mixed martial arts. And that’s as a fighter. How would he feel about being remembered even more for his contributions outside the Octagon, for his efforts in creating Team Alpha Male, helping to produce world-class fighters, and for being an ambassador of the sport?

“I’d definitely be satisfied,” he said. “It’s one thing to create something that’s great, that’s you and that you’re remembered for, but to have a part in a bunch of other people’s success and build something bigger than you, that’s huge. I feel like I really have an opportunity to do that.”

And he does. But at the same time, the gloves still fit, he still wants to go through the rigors of making weight, and he still wants to strap championship gold around his waist one more time. So as far as legacy goes, that’s for other people to talk about.

“I’m real bad at sitting back and smelling the roses,” laughs Faber. “I’m just gonna keep living life, moving forward and doing the things I do, and in a couple years – maybe ten – I’ll sit back and be like ‘that was a good time,’ or ‘that was a bad time.’ But right now, I’m just gonna fight whoever they put in front of me, I’m gonna love what I’m doing, and I’m gonna work my butt off and believe in myself. And I don’t really care where it lines up in the great scheme of the history of me.”

“Yeah,” he laughs. “You guys can decipher that stuff.”