“Getting that UFC title is a big goal on my list, and it’s what I’m shooting for, what I’m working for." - Urijah Faber 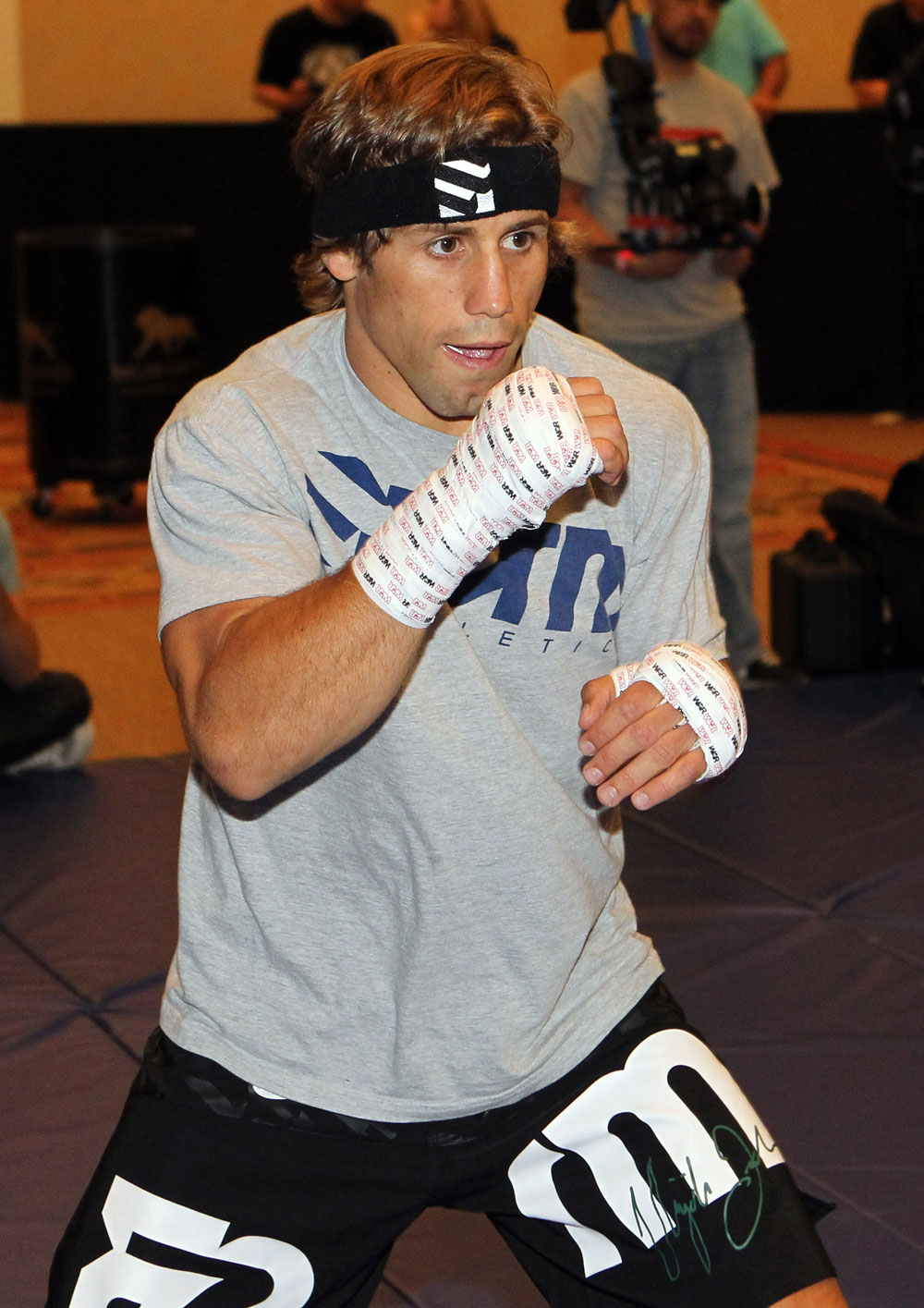 Everyone knows that Urijah Faber wants another chance to wrest the UFC bantamweight title away from his nemesis, Dominick Cruz.

“The California Kid” thought he had done enough to accomplish the feat at UFC 132 in July.  Over 25 minutes, Faber and Cruz went back and forth, combining to deliver one of the most entertaining fights of 2011 as the first bantamweight duo to headline a UFC Pay-Per-View in the organization’s history.

When the scorecards were read, Cruz’s hands were raised as Faber threw his head back in disbelief. Four months later, the charismatic former WEC featherweight champion is one win away from earning a place opposite Cruz inside the Octagon once again.

“I think it’s pretty high up there,” said Faber of where a trilogy bout with Cruz rests on his personal “To Do” list. “He has the belt and that’s what I want; that’s the pinnacle of this sport, to be UFC champ, and that’s where I want to be. I’m looking forward to the opportunity to get back in with him, but I’ve got to earn it, and that means beating Brian Bowles.”

Tucked into the third position on Saturday night’s UFC 139 event, the pairing of Faber and Bowles matches two former WEC champions hungry to once again stand across the cage from the current 135-pound king.

Despite his championship pedigree, Bowles isn’t as well known as some of the other fighters in the bantamweight division — a former world champion who currently competes in anonymity in the UFC. While his own star shines brighter than most amongst the lighter weight fighters, Faber knows that fan recognition isn’t going to be a factor in determining Saturday night’s outcome.

“The thing that matters most is that I entertain, I dominate, and I show my skills. I wish that it made a difference that nobody knows who Brian Bowles is, but it doesn’t. He doesn’t care about that. He’s going to go in and fight tooth and nail, and that will make for a great fight.

“It’s going to be best man wins, and I believe that’s going to be me, and I’m going to do it in a dominating, exciting fashion. That’s what it’s about for me — putting my best foot forward, having fun doing it, and making sure everyone else has fun while I’m doing it also.”

As much as he’s itching for a chance to face Cruz for a third time, Faber isn’t overlooking Bowles, not in the least.

“I know he’s got a strong skill set. He’s a dangerous guy because he goes for broke, which are the kind of fighters I like. He’s got a heavy overhand right, solid standup all around, and a lot of good chokes. He’s pretty good at everything, but I think I’m going to have an edge in every area.

“The one thing that you have to do is be respectful; respecting what he has to offer. He can knock guys out, he can choke guys out, and as soon as you think you’re above that — that it can’t happen to you — that’s when you see black belts like Wagnney Fabiano and Miguel Torres getting submitted by our guy, Joseph Benavidez.

“You’ve got to respect the fact that if somebody knows how to do something, you’ve vulnerable to it. That’s why I don’t get caught in anything; I’ve fought a lot of black belts and heavy punchers, and awareness is the key.”

In addition to being aware of Bowles’ abilities inside the cage, Faber also knows there are some who question his potential quick return to a championship bout.

Just four months after losing to Cruz at UFC 132, the 32-year-old leader of Team Alpha Male will earn another kick at the championship can with a win on Saturday night, a much faster return to title contention than is afforded to most contenders. To Faber, there is a simple explanation.

“Who else do you give that to? You give it to somebody that can beat me and you give it to guys that have a chance like Eddie Wineland or Brian Bowles, and the winner gets a title shot, and I’ve been winning those. Any opportunity they give me, I’ll take it, and they’re usually hard earned.”

Securing the chance to face Cruz for a third time is about more than hoping to win the rubber match in their personal battle; it’s about filling the one gap that remains on Faber’s resume.

“Getting that UFC title is a big goal on my list, and it’s what I’m shooting for, what I’m working for. I see improvements all the time, and especially now at the new weight, I have every advantage to win, so I’ve just got to make it happen.”

He was successful the last time he was in this position, earning a victory at UFC 128 and channeling YouTube celebrity Antoine Dodson while offering Cruz a warning in his post-fight interview.

Saturday night, Faber hopes history repeats itself, with a win over Bowles bringing him the chance to settle things once and for all with the UFC bantamweight champion. The only difference is that this time, he’s chosen to offer his warning to Cruz in advance.

“Dominick, I can hurt you, you can’t hurt me; we both know it. Run tell that, homeboy.”