"I have to go back to the reason why I started this sport, be thankful
for everything that I have, and make sure that I’m doing it because I
want to go out there, perform, and have fun." - Urijah Faber 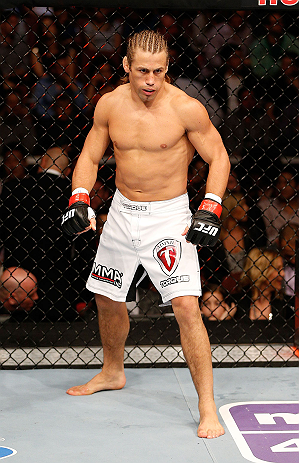 Urijah Faber is a company man, and I mean that in the best way possible.

I know there are times when people describe a colleague or an employee as “a company man” and the words are dripping with sarcasm, but that’s not the case here. If I had my own company, I’d want to stock it with guys like Urijah Faber.

Just a handful of days after dispatching Ivan Menjivar with a back-mounted rear naked choke at UFC 157, the perennial bantamweight title contender was tabbed to replace injured flyweight champion Demetrious Johnson in the main event of The Ultimate Fighter Finale on April 13 at the Mandalay Bay Events Center in Las Vegas. “Mighty Mouse” was scheduled to defend his title against John Moraga, but with the champion sidelined, the UFC opted to press pause on the fight, and see if Faber could do them a solid.

There was one hitch: he’d have to fight his good friend, Scott Jorgensen.

Without pause, Faber accepted the fight and started putting in work both in the gym and in the media, doing his part to ensure the bout got the attention it deserved in the build-up to the event, and that he could once again give the fans their money’s worth when he and Jorgensen stepped into the cage together.

“I’m coming off of not fighting – I only fought once last year,” explained Faber when asked if he considered turning down the bout with Jorgensen. “They’ve tried to make this fight a couple times, and I’ve been able to deflect it each time. Then my manager was talking about having this fight five months from now, which would actually be worse.

“I’d rather have a fight like this be short notice because I’m fighting a buddy, you know? You don’t have to think about it too much; you just get it over with, and you can get back to doing your own thing.

“I’m not the type of guy that every turns down a fight, and Scotty’s not either,” added Faber, whose record stands at 27-6 overall following his win over Menjivar. “We’re not difficult guys to deal with when it comes to that. It’s the profession that we’re in. There are some guys on my team that I won’t fight, but I can’t actually say that for Scotty because we’re not actually on the same team.”

While the ever-positive Faber would be able to find the silver lining in the darkest cloud, the reality of the situation is that he’s in a precarious position career-wise.

As has been often discussed, he’s unbeaten in non-title fights over the last four years, but without a victory during that same stretch when gold is on the line. Still hovering around the top of the division and within reach of another title shot, the potential individual gains aren’t nearly as great for Faber as they are for Jorgensen.

It’s an all-too-familiar situation for “The California Kid,” but one he’s accepted, in part because he loves what he’s doing, but also for the greater good of the division, the lighter weight classes, and the UFC as a whole.

“I feel like every fight in this division is high risk, low reward for me because I’ve got one of the bigger names in the lighter weight divisions. Whatever that’s a testament to – whether it’s my fighting over the years, being a world champion before, or people liking my personality – whatever the case, I have one of the more notable names in the sport, for the lighter weights especially, so at this point, every fight is riskier for me on that front.

“I don’t have a lot of noteworthy, big name opponents,” continued Faber. “In the 205-pound division, there’s Machida and Shogun and Wanderlei, Dan Henderson, and on and on and on; all these guys that have been around and in the limelight for a long time. You have names that draw like Rashad Evans and all this history to the weight class. (Taking this fight) is doing what I think is important in building the weight class, and bringing a light to other fighters in the division.”

Faber has been an eager and willing ambassador for both the sport and the lighter weight classes dating back to his days atop the featherweight division in the WEC, and it’s a role he will likely maintain long after he walks away from the cage. While some fighters opt to focus on what is best for their personal brand and their path to the top, the 33-year-old leader of Team Alpha Male has never been a “me first” kind of guy.

He’s more than willing to help wherever he’s needed, even if that means taking a fight against a good friend on short notice or always being the man in the cage with plenty to lose, and little to gain.

“I’ve never been a guy that’s worried about money. It’s come to me, and I’m very fortunate, and very thankful, but as soon as I start dwelling on that type of thing is when I have my mind in the wrong place.

“There will be a time when I have think, `All right – is this a fight that makes sense for me?’ and I think this one does, especially because Scotty’s my friend. This is a big fight for us. We’re the main event on a live card that is going to go out to millions of people, and we’re stepping up for our promotion. We’re putting our friendship aside, our management aside, and everything else, and just going out there to have fun.”

Faber is the type of guy that would stick around until the job was done without asking about overtime pay – or any pay at all, for that matter.

Honestly, he’d probably be the guy who sprung for late night coffee and dinner too, telling you to “put your money away” as you reached for your wallet. None of it is done for show either. He’s not looking for a pat on the back or any form of recognition; he’s doing it because he believes it’s the right thing to do for the company that allows him to make a career out of doing what he loves to do.

Besides, it’s not like he doesn’t punch people he likes a great deal in the face on a regular basis anyway.

“I beat some of my best friends on Team Alpha Male up every day and vice versa, so we’ve just got to go out there, embrace the moment, and have fun with it.”