Urijah Faber Eager to Get Back to His Fighting Self 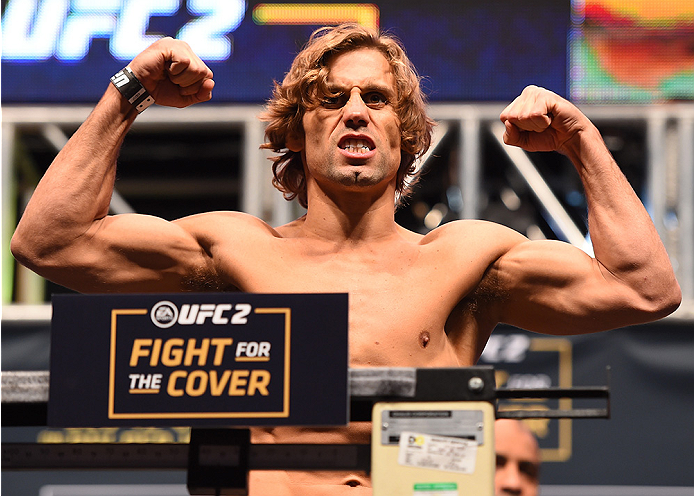 Ever since his loss to Frankie Edgar last May in Manila, Urijah Faber has talked about everything but his own fighting career. Whether it was his Ultimate Fighter coaching rivalry with Conor McGregor, the drama surrounding the migration of TJ Dillashaw from Team Alpha Male to Team Elevation, or the return of former opponent Dominick Cruz, Faber has been in as much demand by the media as he’s ever been.

But now, with a UFC 194 bout against Frankie Saenz on Saturday, “The California Kid” finally gets to talk about himself – and fighting - again.

Returning to the bantamweight division after a brief foray to 145 pounds for the Edgar fight, Faber wasn’t necessarily thrilled about the weight cut (though he hit the mark easily at Friday’s weigh-in), but he is excited about putting the gloves back on, even if the streaking Saenz isn’t exactly a household name.

“I get up for the fight because it's the same thing as it is every time,” Faber said. “It's another person trying to impose their will and beat me up. If that's not motivating, I don't know what it is. I don't care who knows what about who. The truth is that the only thing you should be nervous about is whether you're prepared or not, and I feel like I'm prepared.

“No matter who I fight, I know it's gonna be a battle. We're all training to beat each other up and everybody in the UFC's tough. Whether people know them or don't know them or anything else, it's a battle of wills and I don't plan on budging.”

Faber’s smile is ever-present, as he’s seemingly having more fun in life than anyone else is, but at 36 years old and with 40 fights under his belt, you have to wonder if his day job is still as enjoyable as it always was. It is.

“When it's not fun, I definitely won't be doing it,” he said. “We do a lot of training and preparation and deal with media and do all this different stuff and then we get to perform. That's like the rock star that's about to do a concert. If there are any nerves attached, or whatever, it doesn't matter. You're going out there to do what you trained to do and be in the spotlight and challenge yourself. That's exciting.”

Not as exciting as the end Faber has prepared for his storied career.

“The goals for me are to finish strong,” he said. “I know I don't have a lot of time left in this sport because I basically don't want to be fighting into my 40s. I want to be at my peak right now, have some solid fights to end this career, and go down as a world champion in multiple weight classes, and cement my name as one of the best fighters of all-time.”