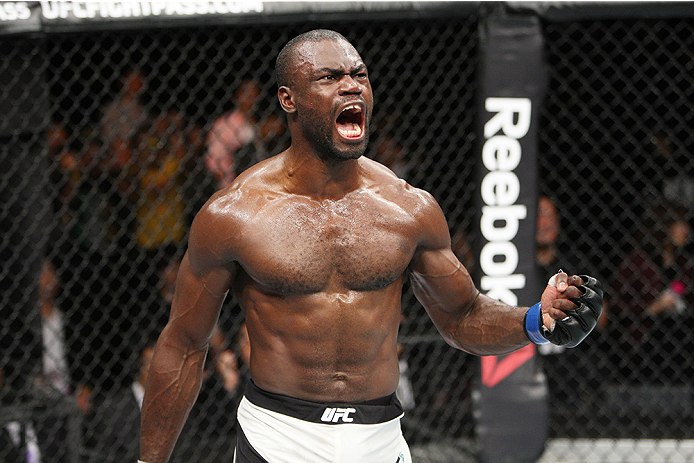 It was a rough first round on the scorecards for Uriah Hall in his September bout against Gegard Mousasi, but the New Yorker always appeared calm, as if he knew that given the slightest opening, he could turn things around.

As for that second round, “I just blanked out,” he laughs.

Most fighters pray for such a blank out, as Hall took only 25 seconds to finish the highly-ranked middleweight contender and earn his own spot in the top ten. But it wasn’t just the win that mattered, but how he got there, as a spinning kick was followed by a flying knee, with the finishing strikes just window dressing.

The spinning kick was vintage Hall and the kind of technique that draws oohs and aahs. The flying knee, that landed with such force to make fans cringe. For a fighter that has been criticized for a lack of killer instinct, it was a killer move. Put together, it announced the arrival of “Prime Time” to the next level.

“The martial arts part of it, I call it ‘thinking body, dancing mind,’” he said. “When my body starts to think on its own, that’s when I do spectacular stuff like that. That’s when I’m at my best. The flying knee, you see a lot of times when guys get rocked, what do they do to relax? They grab you, take you down and they’re like ‘I just got hit really hard. Let me get my s**t together.’ So I figured he would do something like that, and if you watch the video, he had open arms, and that knee was like ‘welcome.’”

“It was a weird moment.”

It may have been a defining one for the 31-year-old, who has been in several varied situations in a 2015 campaign that has seen him with three of four bouts. He beat two late replacement foes in Ron Stallings and Oluwale Bamgbose, was a late replacement himself when he filled in for Roan Carneiro against Mousasi, and in his lone loss of the year, he dropped a lackluster split decision to Rafael Natal in May.

The Mousasi fight was the pivotal one though, for so many reasons.

Uriah Hall was Uriah Hall on September 27 in Japan.

“He (Cooper) said ‘do the things you think you can’t do, whether it’s a kick or a flying knee.’ He said these things and I ended up throwing a kick and a flying knee. So I owe that to Arshay.”

The confidence in Hall’s voice is evident as he closes in on another short notice bout, a UFC 193 matchup with Robert Whittaker in Melbourne, Australia that saw him step in for Michael Bisping. He should be. He’s had a spectacular year, he’s showing the potential that everyone saw on season 17 of The Ultimate Fighter and the bandwagon that emptied as he had some erratic early performances has not just filled up again, but it needs an RV. Hall has noticed it too, but he chooses to not let it get in his head.

“I ignore the f**k out of it,” he laughs. “It goes back to the TUF days with the bandwagon, and after I lost, it was ‘oh, he’s not what we thought.’ So it’s back to the bandwagon again, but I don’t pay attention to it. I’ve always tried to be like that, where I don’t care about the fame. For me, it’s more of a personal, individual journey. All this could be taken away just like that. And when you realize that and focus more on you, you focus on what you want to do and the tasks that are ahead of you. And I see different outcomes. I see me inspiring and helping other people. Yeah, you have people out there saying get this money, and the followers, and the media, and great success comes behind it, but I see the craziness behind that. I’m gonna pave my way and I’m gonna be the only dude that’s real and I’m gonna always keep it real. I’m not gonna sell out myself and I’m not selling out my friends, especially my friends, because they’re the ones that have been there for me through thick and thin.”

Some around him did wonder whether it was the right move to take a short notice bout against the dangerous Whittaker, who sits below Hall in the middleweight rankings.

“It was an opportunity again and I was like ‘why not?’” he said. “From a business standpoint, and someone brought it to my attention, he was like ‘hey man, you’re fighting a guy that’s 14 and you’re number 10 – you’ve got leverage right now. Fighting a guy that’s 14 is going backwards.’ I saw that and I think a lot of these UFC guys, especially in the top 10 or 15, it’s business and it’s playing it smart. But me, I’m like, if you’re in the top 15, you’re one of the best. I’m gonna fight you either way eventually, so why not? So I look at it from more of a martial arts standpoint.”

It is risky, but as Hall points out, “I go in the ring every time and I’m risking everything.”

A win caps off the best year of his UFC career, and sets the stage for a 2016 campaign that could put him in the title race if he keeps getting his hand raised. So now the talk can go back to Hall’s first bout with the current UFC middleweight champion Chris Weidman back in 2010. Fighting in the Ring of Combat promotion, Hall was 4-0 at the time, Weidman 2-0, and anticipation was high for the clash of east coast prospects.

I warn Hall that I’m going to start some trouble by asking about his first pro loss, but he’s cool with it, and he responds honestly.

“He was probably my toughest opponent,” Hall said of Weidman. “He’s a great wrestler and that fear got in my head. I was worried about getting taken down, my old school put a lot of pressure on me, saying that if I won the fight I’d be going straight to the UFC, and I was cracking under that pressure. I think mentally, I was just young. I remember getting hit, and it felt like 15 seconds, but when I watched, it was going on for a while. I was protecting my head just enough, and I guess if you don’t respond, they’ll just stop the fight. I let it go. I didn’t hate the guy. He’s a guy just like me. I’m just competitive, that’s all.”

Watching the fight again, it’s a clear win for Weidman, but it was far from a blowout. Hall did get taken down early but he got right back up. He also landed some hard counters before getting dropped by a punch to the jaw. As for the finish, it was more of a case of unanswered blows than Hall being knocked out clean. In short, it’s a fight that would be an intriguing one if they did it again, and Hall would love to get a second crack at the “All-American.”

“Absolutely,” he said of a Weidman rematch. “I think it’s gonna be like a Cinderella story. He was the first guy to ever really rock me. Was I out cold? No, I still saw daylight, but it was still that good shot that he got on me. So I feel like somewhere down the line we’re gonna meet each other again. I think it’s fate. It’s gonna happen, and I’m gonna be a different version of myself. In a weird way, it kind of needed to happen because it brought out the best in me and made me realize who I really am. It was my first encounter with fear. So it’s a Cinderella story. I hope to make it a movie.”

If he does, it will be like coming full circle for a fighter who learned his craft from the Silver Screen.

“I’m not a killer. I don’t possess that,” he said. “But what I do possess is the ability to disarm you and dissemble you in a very fashionably cool ass way. (Laughs) In my head, I can’t just beat you up; I gotta look cool doing it. And the only place you see that is in the movies. And that’s where I learned how to fight – movies and video games. It’s from Bloodsport, it’s from Karate Kid. All that stuff you used to watch, I’m actually using it.”