Uriah Hall: Nothing's Personal Until It Is 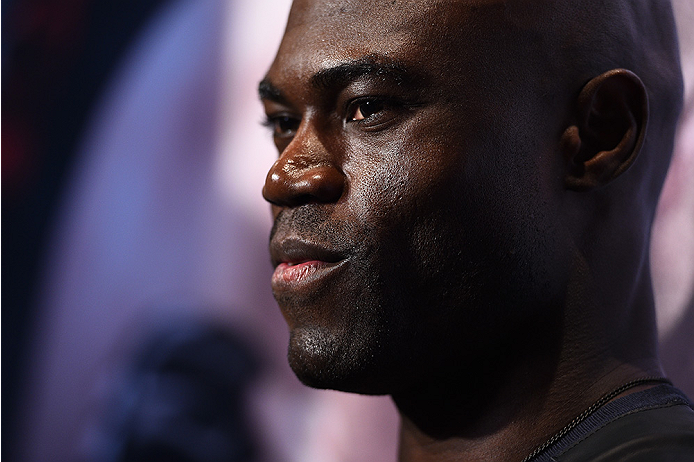 There are a lot of additional elements that come with spending time in the spotlight. When a fighter’s profile is on the rise, there are other aspects that increase with the popularity that comes. Expectations get bigger and the criticisms get louder as every step along the way is put under the microscope.

Uriah Hall is all too familiar with this scenario and it’s one he’s chosen to leave alone.

Granted, the flashy middleweight striker understands such things will continue to exist with or without his involvement, but Hall’s motivations for competing have nothing to do with the opinions of others. He fights for reasons all his own, and the things that come ago outside of his line of focus are simply background noise to the Jamaica native.

“I just enjoy the sport,” Hall said. “I put a lot of focus on the martial arts side of things and that means not getting caught up in all the drama. I don’t get caught in the talk or any of those other things. I just go out there and perform. That’s what I mean when I’m talking about my focus.

“I’m no Conor [McGregor] and I’m not one of these guys who talks s**t. I know at the end of the day it’s about selling tickets, but for me it’s just the journey, man. I just want to go out there and fight. I’d rather sell tickets with my fist, but some people do it differently. I just don’t want that side because it’s not me. I would rather go out there and be myself.”

Since his time on season 17 of The Ultimate Fighter, Hall has battled to establish traction under the UFC banner. Even though he came up short in his first two official outings inside the Octagon, “Prime Time” has made steady distance between his current form and the rough start he experienced on the biggest stage in MMA.

Over this stretch, Hall has notched three consecutive victories, and has shown notable gains in every area of his game along the way. He battered gritty veteran Chris Leben into retirement, overcame a gruesome broken toe injury to defeat Thiago Santos, then weathered the change of opponent carousel to finish Ron Stallings in the first round of their meeting at UFC Fight Night: McGregor vs. Siver back in January.

Yet, despite having found victory in three straight outings, Hall feels far from satisfied with how those wins came to be. Make no mistake about it…he’s happy to get his hand raised at fight’s end, but Hall feels he has so much more to showcase than he’s been able to unleash thus far.

“I think the talent was there for me all along, but it was me deciding to make that change that made the difference,” Hall explained. “I mean my wins have been a little weird if you look at them. Chris Leben didn’t come out of the first round to answer the bell for the second. I broke my toe in my second fight, then my opponent was switched out three times before my last fight and that ended because of a cut. I can’t complain about any of them, but I feel like I haven’t been able to really showcase all of my skills.

“Getting out of your comfort zone is important because that’s when you can put it all together,” he added in regard to his continued growth under the spotlight. “It’s just the atmosphere. Being in the spotlight is something that can either get to you or you can embrace it. You can run away from it or you can just let it break you. I’ve had my share of pretty much all of that and I just went back to what’s important and that’s me testing myself. I know I can matchup with the best guys and in doing so I get to work my way up.”

The 30-year-old New York-based fighter will get the next opportunity to move up the ladder in the 185-pound fold when he faces Rafael Natal at UFC 187 this Saturday night. While “Sapo” is a seasoned veteran in the weight class, and a victory over the Brazilian would be a solid addition to Hall’s resume, he has different motivations for his eagerness to step in and mix it up with Natal.

And where Hall is always one to show his opponent respect, there is beef between the two that makes that difficult on his side of the equation. Hall is coming to Las Vegas to not only get the win, but to do it impressively, and to settle the grudge that exists in dominant fashion.

“I’m really excited about this fight because I don’t like the guy,” Hall said. “Something happened years ago - some bulls**t he did - and now I get a chance to beat him up for it. I know he trains with Phil Nurse and I offered to awhile back, but believe it or not, Phil Nurse didn’t want to train with me because he was working with ‘Sapo’ and ‘Sapo’ thought it would be a bad idea. I thought that was bulls**t because I don’t give a s**t.

“If I’m training against a person that has to fight me and I’m in the same room with them, it doesn’t bother me. I don’t look at it like, ‘Oh man he’s looking at my weakness.’ It does not faze me because I’m going to beat you anyway. I actually kind of like it because they are watching and knowing that’s what I’m going to do to them. I know my striking is a hell of a lot better than his and my ground game is underrated. He’s welcome to test that out if he wants. I’m planning on knocking him out in the first round because I want to get this over with so I can stop fighting scrubs.”