Uriah Hall Is Locked In

Uriah Hall Enters UFC Fight Night: Hall vs Strickland On A 4-Fight Win Streak And With Plans To Keep Climbing The Ladder.
By Gavin Porter, on Twitter, @PORTERUFCNEWS • Jul. 31, 2021

Uriah Hall has never been afraid to speak his mind.

The longtime UFC middleweight contender was admittedly disappointed when the UFC offered him a main event showdown with Sean Strickland. He thought his four-fight win streak, which included finishes of Bevon Lewis, Anderson Silva and Chris Weidman, would earn him a fight with a middleweight ranked higher than him.

“F***. That was my initial thought, like why am I going backwards,” Hall said. “I think a lot of folks were already matched up and [Strickland is] hungry, man. I have what he wants, and he’s got what I need. I need to beat him, and he wants my spot. We are both trying to chase that gazelle right now. Izzy (champion Israel Adesanya) got the gazelle and he’s running around and we’re trying to catch that mofo. In a couple days we have to say, ‘all right, who belongs to get there first?’ It’s business at the end of the day. That’s how I look at it.”

Watch Hall Vs Strickland On ESPN+

And just like that, UFC Fight Night: Hall vs Strickland was born.

That all-business approach has been something that Hall needed time to get used to. With 16 UFC fights under his belt, Hall has experienced the thrilling highs and devastating lows of the sport. Each fight camp and event helped shape him into the version of “Prime Time” that we see today.

Hall tries not to look too much into the past, as those fights and those opportunities aren’t representative of who he is today. Once in a while he’ll take a second to recognize his accomplishments and failures, but he’ll never dwell on them.

“I’m staying present as much as I can to focus on what I need to do to get to the place I’ve never been. I don’t stay in the future too much either because it’s uncertain and it sets up that expectation. Usually, expectation is a sign of failing so I try to be present, I try to grow, and I try to enjoy the process,” Hall continued. “I was in that position where I lost a few fights and those doubts and everything come into your mind and sometimes you listen to them, and you play victim to them. Whether that’s people or it’s you saying maybe I’m not as good but I’m proud of myself for having the courage to not quit. I think Rocky Balboa said it in a movie, ‘It’s about how hard you get hit and you keep moving forward.’ I’ve gotten hit hard and I just keep going forward. That’s what it’s all about; that’s the perseverance about it.”

Perseverance is a key word for Hall. He went through a tough stretch, losing four of five before circling the wagons and putting together one of the best streaks of his career. Winning was something that Hall knew would come as long as his mental game was where it needed to be.

One obstacle that the middleweight has often faced in his career is boredom. There have been fights that Hall didn’t want to take, but did anyway, which resulted in him checking out of training and of the fight itself. Those lapses in interest caused Hall to lose some footing in the division. 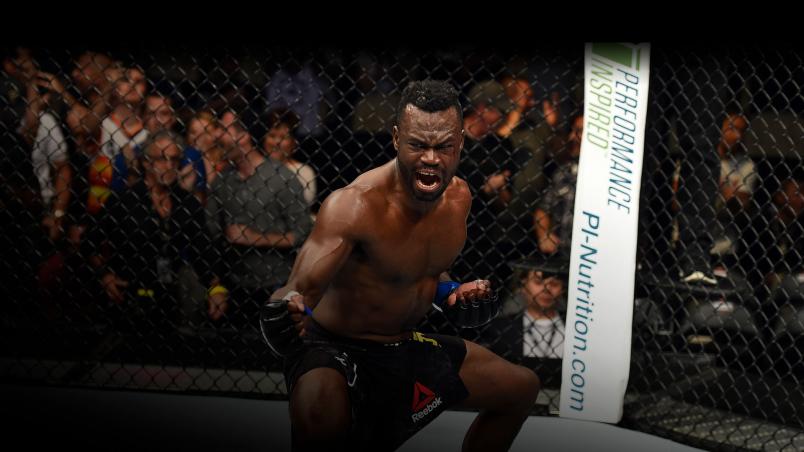 Uriah Hall of Jamaica celebrates after defeating Krzysztof Jotko of Poland in their middleweight bout during the UFC Fight Night event inside the PPG Paints Arena on September 16, 2017 in Pittsburgh, Pennsylvania. (Photo by Josh Hedges/Zuffa LLC)

And since making the move to Fortis MMA, Hall has been a picture of focus. From living inside the training facility located in Dallas, Texas to intense staredowns, nothing but the task at hand has crossed Hall’s mind.

That’s what you can expect from Hall at UFC Fight Night: Hall vs Strickland. A laser-focused head hunting “sniper” that is looking to stop Strickland in his tracks.

“He’s just tough. He says it so many times. I’ve experienced it with him training in the past. He’s the type of guy to just love that bloodbath, but I’m a samurai, man. I’m like, ‘Oh, there it is, take you out.’ I’m a sniper,” Hall said. “I expect a tough fight, I expect him to give me his best, I expect him to walk me down, I expect all that stuff. Am I afraid of it? Absolutely not. This is what I do. He said it’s going to be crazy and it’s going to be a bloodbath; I don’t live in the future, I am just hanging out here, trying to get better, so we’ll see what happens.”

“I expect to get my hand raised and I expect to really go out there and test myself with one of the best.”