The two struck on even terms for most of the opening frams, but four minutes in, Aubin-Mercier got a takedown and proceeded to land some ground strikes, accounting for the most significant scoring of the round.

OAM had even more success on the mat in the second, as he wore Martin down with his swarming attack and kept his foe from getting his offense in gear.

Martin tore after Aubin-Mercier to begin the final round, and while a choke attempt looked tight, the Canadian got free. Martin was able to remain in the top position, where he fired off punches before finding the space to take his opponent’s back. And though he clearly won the round, Martin wasn’t able to finish, leaving him on the short end of the scorecards by tallies of 29-28 twice and 28-29.

So, @UriahHallMMA came out to "Don't Call It A Comeback" by @llcoolj. He then proceeded to turn in perhaps the COMEBACK OF THE YEAR! pic.twitter.com/YsPGUQ7gBA
— Matt Parrino (@MattParrinoUFC) September 17, 2017 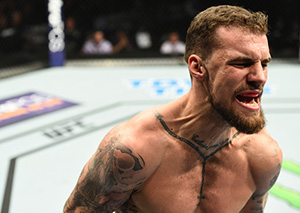 Daniel Spitz picked up his first UFC win in heavyweight action, as he knocked out veteran Anthony Hamilton in less than a minute.

Spitz was light on his feet as the bout began, but when the two engaged 20 seconds in, he landed a right hand and then took Hamilton down. Hamilton tried to bounce back up, but he was nailed with another right that basically ended matters, with referee Dan Miragliotta stepping in at :24 of the opening frame.

Uriah Hall snapped a three-fight losing streak in his meeting with fellow middleweight contender Krzysztof Jotko, waging a remarkable comeback to stop Jotko in the second round.

Jotko went on the attack from the time referee Rob Hinds waved the two into battle, and his pressure kept Hall guessing in the early going. In the second minute, Hall began to settle into the fight, but a right uppercut from Jotko put him in trouble, and the Polish standout tried to finish. Hall was able to weather the initial storm, but after Jotko took the fight to the mat, he continued to take a series of hard shots. Hall eventually got to his feet with 90 seconds left, and while Jotko put him right back down, Hall fought his way upright and appeared to be recovered as he made it out of the round.

In the second, it was a new fight for Hall, and just before the midway point of the frame, a flush right punch to the head put Jotko on his back. A series of right hands followed as Hall chased Jotko to the mat, and that was it, as Hinds stepped in and stopped the fight at 2:25 of round two.

Lightweight prospect Gilbert Burns picked up the first knockout of his UFC career in the opener, as he finished Jason Saggo in the second round.

The clash of jiu-jitsu black belts stayed primarily on the feet in the opening round, and while Burns wasn’t successful in getting the fight to the mat, his improved standup was on display as he edged Saggo out in the first five minutes.

The back-and-forth striking battle continued into round two, but with a little less than two minutes remaining, Burns was able to slam Saggo to the mat. Saggo didn’t stay there long, though, as he fought to his feet and resumed striking, mixing his stances as he pursued “Durinho.” But just before the end of the frame, Burns landed a right hand and then another, with the second putting Saggo down and out. The official time of referee Keith Peterson’s stoppage was 4:55.