Nearly five years ago, Uriah Hall made an instant impression with fight fans when he knocked Adam Cella stiff with a swift and powerful hook kick in the opening round of the middleweight competition on Season 17 of The Ultimate Fighter.

Later that same year, the Jamaican-born, New York City-raised karate stylist slept Bubba McDaniel in eight seconds, prompting UFC President Dana White to label Hall the “nastiest fighter in TUF history.” The third overall pick in the 16-man competition, Hall cruised into the finals, where he was upset by fellow Team Sonnen representative Kelvin Gastelum, the final addition to the squad and the penultimate pick of the competition.

He’s been consistently inconsistent ever since.

Hall’s issue has never been a lack of talent or injuries or anything physical; he’s been relatively healthy throughout his UFC run and if not for an inordinate number of opponents withdrawing from scheduled matchups, he probably would have fought even more than the 11 times he’s stepped into the Octagon since his bout with Gastelum.

The biggest hurdles for the now 33-year-old middleweight have always been internal issues – struggles with self-confidence and belief in his talents, coupled with worrying too much about how he’s perceived and the faceless critics ready to tear apart every poor performance.

“For years I haven’t embraced that I’m a bad ass m*****f*****,”said Hall, who returns to action against Vitor Belfort in the co-main event of Sunday’s fight card at the Scottrade Center in St. Louis. 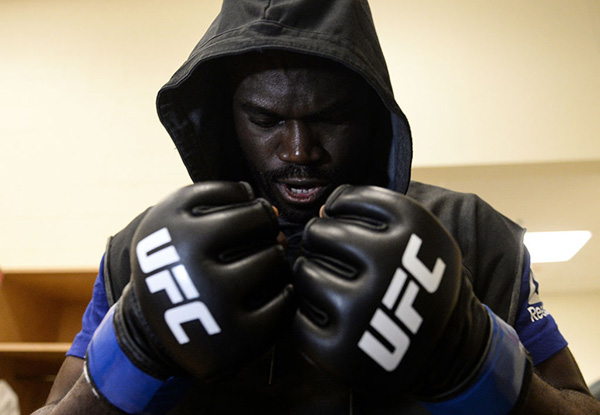 The comment came in reference to his most recent outing – a bout with Krzysztof Jotko in September that showcased the good and the bad of the enigmatic finisher.

Over the opening five minutes, Hall was hesitant and it cost him as the Polish kickboxer dropped him with a series of uppercuts along the cage before taking him down to the canvas, mounting him and dominating the round. In the second, as soon as Hall started coming forward, he found success, planting a right hand between Jotko’s eyes that dropped him to the canvas, where a series of clean, accurate follow-ups brought the fight to a close.

“The moment I embraced it, something happened,” he said. “I zoned in, I had clear vision and everything made sense and I knocked him out.

“I didn’t believe it,” Hall said in regards to his standing as one of the most dangerous men on the roster. “Someone can tell you, ‘You’re this,’ but I didn’t see it. If you don’t see it for yourself, it’s almost like it doesn’t make sense and that’s hard to say in the MMA world because you have to be a bad ass.”

That too has been part of Hall’s story thus far in his career.

In a sport where bravado is almost a prerequisite and most everyone brandishes an aura of invincibility and unflappable belief in his or her self – even after an ugly loss – the articulate New Yorker who now resides in Las Vegas has never been shy about his struggles with self-doubt and the pressure that comes with stepping into the Octagon.

Some of those feelings reared their head on the road to St. Louis, as a strong start to his training camp that included a visit from his younger brother Malik was derailed following the death of one of his coaches, Robert Follis.

Around the same time, one of Hall’s best friends from childhood also passed away. Combined with Follis’ death and the feeling of loneliness that comes with being apart from your family during the holidays, the stress began to mount, prompting a call home to mom. 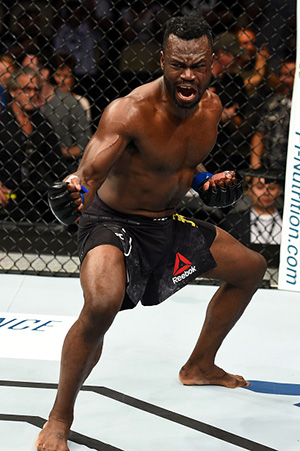 “I was at headquarters almost every day, watching them work together, so I can imagine what he was going through,” he said of Elliott and Follis. “Homeboy just went out there and he had a lot weighing on him and he overcame it because he expressed himself and it was beautiful and I applaud the dude for it.

“It must have been probably the hardest thing he’s had to go through, but it was very inspiring to see him go out there and overcome that – use that passion and express it.”

Now it’s his turn to do the same.

The days of questioning his talents are a thing of the past, replaced by an understanding that he is abundantly talented, that losing isn’t the end of the world and that wolves don’t worry about the opinions of the sheep.

“I had a fear of the ring,” said Hall. “I started to think about the transition I had in fighting and I was like, ‘What turn of events made me switch?’ and I think it was when I fought Kelvin. That was the first time I had ever been in a situation where there was so much pressure, where there were so many people watching me and I was so afraid to fail.

“I replaced it with all these things that were really unnecessary and I had to be really honest with myself that it’s okay to go out there and attempt and maybe not have things go your way.

“Maybe I didn’t have it right the whole time,” he added.

Maybe he didn’t, but he’s starting to figure it out and starting to believe that he is, in fact, a certified bad ass inside the Octagon.