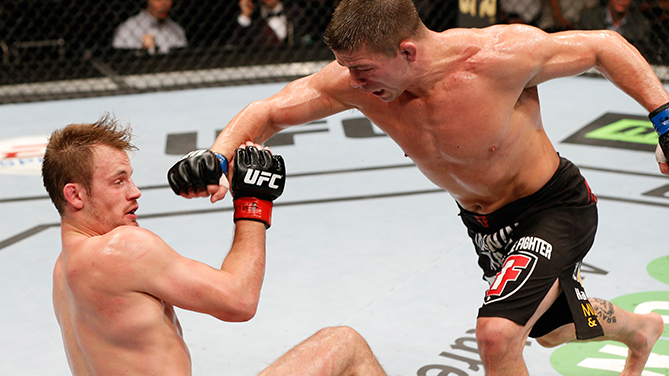 It may have seemed like forever since Rick Story handed current UFC welterweight champion Johny Hendricks his first pro loss in 2010, but Saturday at the Ericsson Globe Arena in Stockholm, Sweden, Story announced that he was back among the top welterweights in the world as he handed highly-touted Gunnar Nelson his first pro defeat via five-round split decision.

Nelson got off to a fast start, firing off kicks and then taking Story down in the second minute. The American got back to his feet quickly, and after a brief lock-up on the middle of the Octagon, the tense striking battle resumed, Nelson again in control, but Story still competitive.

Story began to let his hands go more in round two, despite getting caught with a shot that bloodied him over the right eye. For his part, Nelson’s strikes continued to be on target, but Story was moving his attacks around to the head, body, and legs, wearing the Iceland native down and bloodying his nose.

Nelson opened up round three with a takedown, but again, Story wasn’t interested in a ground fight. Nelson flurried at Story when the two rose, hoping to put some doubt in the American’s head. Story wasn’t moved, but he did look to be breathing a bit heavy as Nelson advanced. With under two minutes remaining, Story began targeting the body of his opponent, and he landed several hard shots, capping off a strong finish to the frame.

A minute into the fourth round, Story sent Nelson to the canvas with a picture-perfect left to the head. Nelson survived the follow-up assault and the two rose, but now Nelson needed to show a sense of urgency to get the points back. He looked for two takedowns but Story remained standing, digging shots to the body each step of the way as the two tied up. Story wasn’t done once the two broke either, as he kept outworking his foe to the horn.

Bleeding from cuts on his forehead and over his eye, Story still pressed forward in round five, hoping not to leave the fight in the judges’ hands. Nelson showed little alteration in his game plan, pecking away at Story with quick right hands, but not doing anything to deter Story and his lead rights and solid inside work that saw him jar Nelson in the final moments. 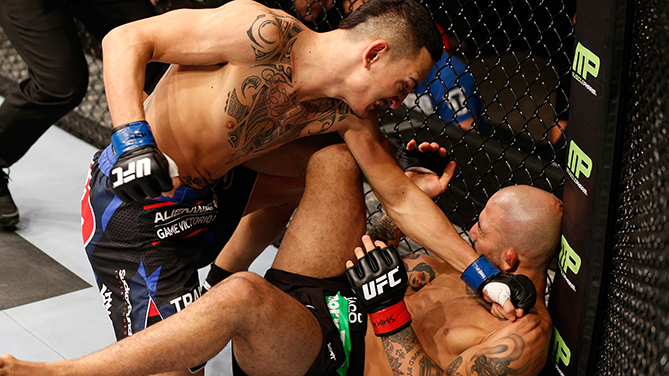 Featherweight phenom Max Holloway continued to impress, picking up his fourth win and fourth stoppage of 2014, halting Akira Corassani in a single round.

Corassani struck first with a thudding left hook in the opening minute, wobbling Holloway for a moment, and he kept the pressure on the Hawaiian with a crisp striking attack. Just past the midway point of the round, Holloway struck back, dropping Corassani with a right hand. A furious barrage of strikes followed, but Corassani appeared to recover as he clinched with his foe. Holloway wouldn’t be denied though, and after scoring another knockdown, the final flurry ended matters, with referee Kristian Hacklou calling an end to the bout at the 3:11 mark. 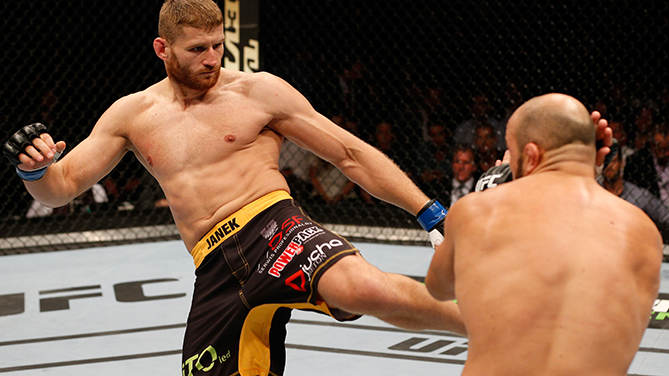 BLACHOWICZ vs. LATIFI
Poland’s Jan Blachowicz announced his UFC arrival with a bang, stopping surging Swede Ilir Latifi in the first round of their light heavyweight bout.

Blachowicz (18-3) took a couple hard shots from Latifi in the early going, but when he ripped off a left kick to the midsection, the Swede was all but done. Latifi (10-4, 1 NC) attempted a takedown as Blachowicz rushed in, but the Polish fighter avoided the attempt and fired off a barrage of fight-ending shots, with the official stop coming by referee Grant Waterman at 1:58 of the round.
> Watch: Jan Blachowicz Backstage Interview 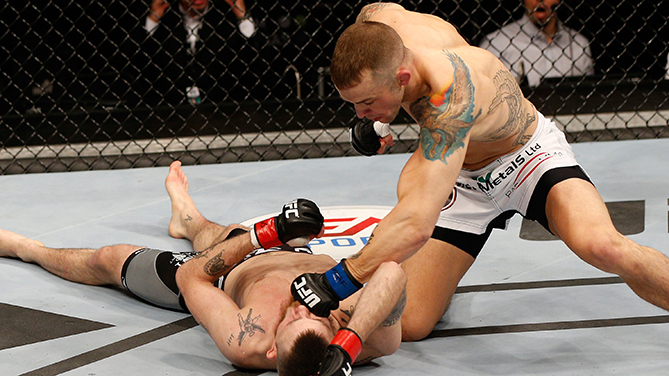 WILKINSON vs. BACKSTROM
Back from a nearly 16-month layoff due to injury, England’s Mike Wilkinson spoiled the unbeaten record of Stockholm’s Niklas Backstrom, knocking out the favored featherweight in just 79 seconds.

Backstrom was using his height and reach effectively as the fight began, and even at close range his knees were doing damage, but out of nowhere, Wilkinson landed a smashing right hand on the jaw and Backstrom collapsed to the mat, with referee Bobby Rehman stepping in to stop the bout at 1:19 of the opening round.