Up-to-the-minute news about UFC on FOX 8, taking place Saturday, July 27, at KeyArena in Seattle, Washington. All bouts listed have been verbally agreed upon by both fighters and are subject to change. 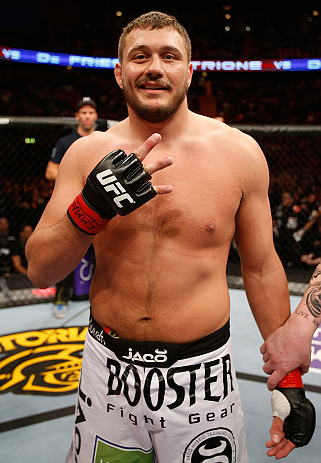 Three injuries inside of a day have shaken up the UFC on FOX card taking place July 27 in Seattle.

The TUF 10 reunion between castmates-turned-rivals Matt Mitrione and Brendan Schaub will have to wait, as Mitrione has suffered a training injury. The heavyweight bout will be rescheduled for a future event.

Welterweight "Ruthless" Robbie Lawler has now lost his second opponent to injury; power puncher "Vicious" Bobby Voelker has agreed to replace the injured Siyar Bahadurzada against Lawler in Seattle. Bahadurzada was himself a replacement for Lawler's original opponent, Tarec Saffiedine. Voelker had been scheduled to fight James Head on August 28; a new opponent for Head will be announced shortly.

Plus, Bobby "King" Green has been forced out of his lightweight matchup with Danny "Last Call" Castillo. Stepping in to face Castillo is Tim "Dirty Bird" Means.

updated June 4
Outgoing Strikeforce welterweight champion Tarec Saffiedine will have to wait a bit longer to make his UFC debut, as an injury has bumped him out of his planned July bout against Robbie Lawler. Stepping in to face Lawler is fellow knockout artist Siyar Bahadurzada.

With Miesha Tate taking over coaching duties on the upcoming season of The Ultimate Fighter</a>, bantamweight prospect Jessica Andrade will now get Tate's spot on the FOX 8 fight card against top contender Liz Carmouche. The world witnessed just how tough Carmouche can be in her February outing for the bantamweight championship, while 9-2 Octagon newcomer Andrade is a proven finisher, equally dangerous with striking and submissions.

After nearly two years out of the Octagon due to injury, lightweight Aaron Riley will return July 27 against Justin "J-Bomb" Salas.

Bantamweight Liz Carmouche is awaiting a new opponent for the Seattle event as well, as planned foe Miesha Tate was called up to coach TUF 18 this week.

Masvidal in for Madadi in Seattle

The UFC on FOX card is now complete, with TUF 14 alum John "Prince" Albert facing Yaotzin Meza in an exciting bantamweight scrap. Albert most recently fought on last December's FOX event, while Meza, a training partner of light champion Benson Henderson, made his UFC debut at the TUF Smashes Finale.

After a lengthy layoff due to injury, veteran lightweight Aaron Riley will return to the Octagon to face Justin "J-Bomb" Salas at UFC on FOX 8. Both men will look to start new winning streaks after suffering setbacks in their most recent outings.

The July 27 event in Seattle has added some more hometown flavor, as Tukwila's Trevor "Hot Sauce" Smith has agreed to make his UFC debut against TUF 3 finalist Ed "Short Fuse" Herman. Both men, who last competed at the final Strikeforce event in January, are known for their exceptional submission games.

The stacked UFC on FOX 8 card finally has its main event, with UFC flyweight champion Demetrious "Mighty Mouse" Johnson defending his title against hard-hitting wrestler John Moraga. The bout was originally scheduled to be contested at The Ultimate Fighter 17 Finale, but a Johnson injury forced the fight to be postponed.

Also added to the card, Washington native Miesha Tate will take on former UFC women's bantamweight title challenger Liz Carmouche in a battle between two of the toughest fighters in their division. Plus, heavyweight knockout artists Matt Mitrione and Brendan Schaub will meet in a battle of TUF 10 alumni.

The July 27 event in Seattle gets a little homegrown talent, as TUF Live winner Michael Chiesa has agreed to put his undefeated record on the line against fellow submission artist Reza Madadi. Both men will be looking to make headway in the crowded 155-pound division.

Fisher vs. Edwards Added to UFC on FOX 8

Battle-tested lightweights Spencer Fisher and Yves Edwards have agreed to face each other at UFC on FOX 8. The always-entertaining veterans, winners of a combined 67 bouts, will both look to rebound from losses in their most recent outings.

An exciting bout from the women's bantamweight division has been added to UFC on FOX 8, as Strikeforce veterans Julie Kedzie and Germaine de Randamie are set to make their Octagon debuts. Both ladies most recently fought at Strikeforce: Rousey vs. Kaufman, held last August in San Diego.

The July 27 card in Seattle continues to take shape, and now two more exciting bouts have been announced. Former Strikeforce welterwieght champion Tarec Saffiedine will make his long-awaited debut against fellow Strikeforce alum "Ruthless" Robbie Lawler. Saffiedine most recently fought in the main event of Strikeforce's swan song, winning the title in a lopsided decision over Nate Marquardt. Lawler made a successful return to the Octagon earlier this year, knocking out Josh Koscheck at UFC 157.

In lightweight action, Bobby Green will look to build on his five-fight win streak when he takes on the always-entertaining Danny Castillo.

MacDonald, Ellenberger Set to Square Off in Seattle

Two of the world's top welterweights will collide at UFC on FOX 8, as Rory MacDonald and Jake Ellenberger have agreed to lock horns. Both men are coming coming off impressive victories in their last bouts; Ellenberger knocked out former Strikeforce welterweight champ Nate Marquardt at UFC 158, while MacDonald most recently earned a convincing decision over BJ Penn at UFC on FOX 5 last December.

The UFC will return to Seattle's KeyArena on July 27, and the event already has its first bout. Hard-hitting lightweight Melvin "The Young Assassin" Guillard will look to get back on track when he faces TUF 6 winner Mac Danzig.