One of the most difficult facets of life to deal with when you’re ambitious and desire to be great is how there are many times when you have zero control over the obstacles and barriers standing between you and the lofty heights you know you’re capable of reaching.

Being driven is great and putting in the work required to climb the ladder and show that you’re ready to take on bigger challenges is crucial but, many times, those traits will only get you so far.

You need things to break your way — for someone to give you an opportunity to show you are indeed capable of being who you present yourself to be — and with each day, week, month that goes by without it happening, you start to question whether it’s all worth it.

Kamaru Usman knows that feeling all too well. 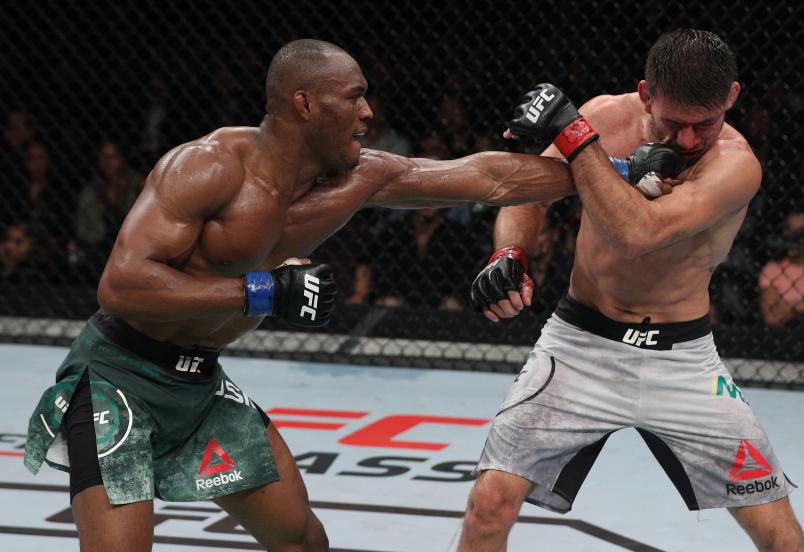 “That’s an avenue that I have been around for a bit because a little under a year ago, I went through that,” said the surging welterweight, who squares off with Rafael Dos Anjos in the main event of Friday’s Ultimate Fighter 28 Finale in Las Vegas. “I had different guys pulling out of fights, guys saying they didn’t want to fight me and it became frustrating to where I started to feel like if I can’t get these fights, if I can’t propel myself to the position I want to be in and further my career, what is the point of doing this?”

After leading the Blackzilians to victory over the squad from American Top Team on Season 21 of the UFC’s long-running reality TV competition with a victory over Hayder Hassan, the Nigerian-born Usman rattled off five additional victories to establish himself as an up-and-coming threat in the 170-pound weight class.

Brandishing outstanding wrestling and fresh off a first-round knockout win over Brazilian veteran Sergio Moraes, opponents weren’t exactly calling the UFC looking for an opportunity to share the cage with Usman, knowing the problems he presented. That inability to secure a bout against a marquee name that would help expedite his climb up the divisional ladder ate at the championship hopeful.

“But with every point in life, you find different motivations, and with my daughter growing, that’s a different motivation,” said Usman, who ultimately squared off with Norwegian Emil Meek at the beginning of the year, cruising to an 11th consecutive victory and seventh straight UFC win. “Me getting older and getting wiser, I get new levels of motivation and it’s things that give me a little nudge like, ‘You need to continue on this mission because we’re not done yet.’”

Some of those same feelings have been cropping up for Usman as he readies for Friday’s showdown with Dos Anjos, the former lightweight champion who enters their headlining tilt following a loss to Colby Covington at UFC 225.

A quick Google search combining the words “Usman” and “RDA” reveals that “The Nigerian Nightmare” started angling for a bout with the Brazilian veteran immediately following his win over Moraes in Pittsburgh. He knew beating a veteran competitor with a championship pedigree and a pair of quality wins under his belt since relocating to the division was the type of matchup he needed in order to take the next step forward in his career, but it wasn’t meant to be.

“I wanted this fight when he was hot, when he was on the incline and not necessarily on the decline,” said Usman. “That’s not to say that I’m taking him lightly ¬— I understand that he’s still a dangerous guy, still a tough opponent, but there was a time where all I saw was him in the picture.”

While the pairing with Dos Anjos is coming more than a year after Usman would have preferred, that doesn’t mean that the streaking contender doesn’t see value in Friday’s headlining affair.

For the second straight fight, the 31-year-old grappler is facing an opponent coming off a loss to Covington, who beat Usman’s last opponent, Demian Maia, seven months prior to their clash in Santiago, Chile this past May.

With Covington in a position to challenge for the welterweight title in early 2019, the opportunity to once again look to one-up his performance by facing someone he’s just beaten appeals to Usman, who pitched a shutout against Maia after the Brazilian had some success on the feet against the current top contender.

“He just fought for the interim title and came up short, but now it’s time for me to go out there and do what (Covington) did by winning, but I need to do it better in order to move ahead of them,” explained Usman. “I need to really put a stamp on it and let everybody know that there is a big separation between me and the rest of the guys.”

And as difficult as it is to win eight straight in the UFC — especially in the welterweight division — the punishing wrestler knows that in order to secure the opportunities he covets, it’s going to take more than just imposing his will on Dos Anjos on Friday night.

“I got into this to win, but I’ve come to an understanding that it’s not just about winning anymore,” said Usman. “You have to win, but you have to put on the performances that are going to entertain and entice people because you could be the most entertaining guy in the world, but you lose a couple of fights and let’s be honest — you’re going to get the axe.

“If you look at my buddy Francis Ngannou — he was one of the scariest fighters on the planet, running through guys, but one loss and one bad performance and he was condemned,” he said of the Cameroonian heavyweight, who went from “future champion” to “overrated” in the span of two fights before rebounding with a first-round stoppage win over Curtis Blaydes last weekend in Beijing, China.

“Congratulations to him for proving everybody wrong last week, but that’s the society we live in now and I’ve come to understand that it’s not just about winning, but also doing it in impressive fashion.”

Which is precisely how he intends to win on Friday evening in Las Vegas.

“It’s not only dominating the way I do, but it’s also me putting on an entertaining performance to really let everyone know that I do whatever I want when I step inside that Octagon,” said Usman.

“No one can stop me. It’s a matter of time for me to get that strap.”