"I’m going down to Australia to win a fight. I’m not going down there to settle some big grudge. He is." - Michael Bisping 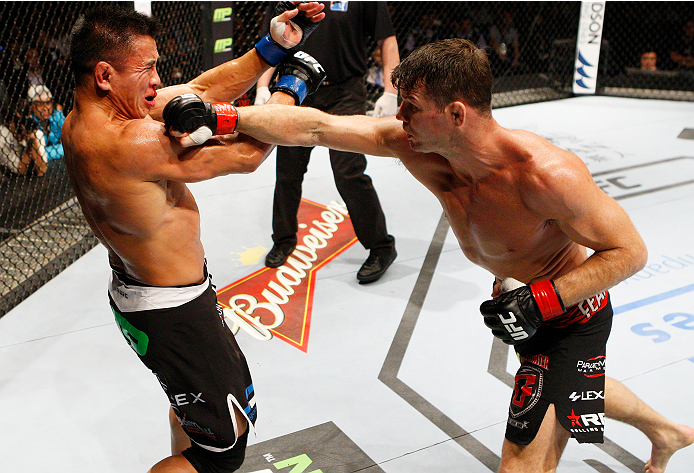 Michael Bisping is in a good mood. And why shouldn’t he be? He is fighting in his third consecutive main event against Luke Rockhold, he’s among the ten best middleweights on the planet after his August win over Cung Le, and for someone frequently described as “polarizing,” he’s got a pretty big fan base cheering him on in Sydney, Australia this Friday.

These days, it’s good to be “The Count.”

“Let’s be honest,” he said, “we both know that I was pretty much despised (Laughs), but it seems that I’ve turned the corner in terms of fan support, certainly in this fight. There are a lot of people on Twitter bitching about Luke Rockhold and pulling for me in this fight, so it’s nice. Of course I’ve done my fair share of things in the past to upset people, but I’ve matured a little bit and I think people are starting to see that.”

It’s hard not to root for Bisping, even begrudgingly, as he prepares for his 22nd UFC fight, a milestone that will leave him tied for fifth on the all-time list for most bouts in the Octagon. An Ultimate Fighter season three winner, the Manchester, England product has seen plenty of ups and downs over the years, the most serious ‘down’ being his injury-induced layoff to repair a detached retina. When he returned in April, he hardly looked like the fighter that had been in the upper reaches of the middleweight division for years, and in losing to Tim Kennedy, some speculated that this might be it for the 35-year-old. But when you ask Bisping whether he thought that the end was near, his response is instant.

“Not at all,” he said. “It was a disappointing fight. One hundred percent everybody knew it, the crowd knew it, and I knew it when I heard them booing halfway through the fight, so it was disappointing for everybody, but of course more so for me.

“Prior to that fight I had a year off,” Bisping continues. “I did nothing. I couldn’t train for the most part because the doctor was saying if I trained, my heart rate would get high, which would raise the pressure in the eye and things like that. But when I got cleared, I went from doing nothing to six weeks later being in a main event with a top guy. So I came back too quick, it was as simple as that. I was too hasty. I missed it, I missed the spotlight, I wanted to get another payday, all those things. So what I really should have done was take a few months off and just get back in the gym and get my reflexes back. Of course you have bravado and you think ‘I could take this guy,’ and I paid the price. Simple as that. No excuses, he beat me on the night, good for him, but I knew I could do better and that’s why I wanted to fight again ASAP.”

Bisping would get his wish, another main event four months later against Cung Le. The Brit was the favorite, but there were plenty of pundits who believed that Le’s power could change the result of the fight in a hurry, and if Bisping got into a striking battle with the Vietnam veteran, that wouldn’t be in his best interests, both for the fight and his career. Again though, Bisping admits to no pressure, at least on fight week and fight night.

“It’s weird. Obviously leading up to the fight those thoughts came into my mind and I was very conscious of that – that I had to win this fight. But the week of the fight, when I flew out to China and on the night in the arena, I was in such a good place mentally and those thoughts never crept into my mind once. I was supremely confident, I’d had the best training camp I’d ever had, and I was just feeling great. So yes, in the training camp of course I was conscious of those thoughts and the risks and the pitfalls of losing another one and what it would do to my career, but on the night, I was in such a good place mentally that I wasn’t even thinking about those things or even contemplating a loss.”

A fourth round TKO of Le silenced the doubters and put a Performance of the Night bonus in Bisping’s pocket, the first post-fight award he had been given since his 2010 win over Yoshihiro Akiyama. Now comes Rockhold, a former Strikeforce champ and currently the number five-ranked middleweight in the UFC. Rockhold is also someone who wants nothing more than to have the referee tell him to fight this weekend, because then he can punch Bisping in the face. If that’s a familiar refrain when it comes to Michael Bisping fights, that’s no surprise, and in this case, the animosity between the two stems from a joke the Brit made after a sparring session with Rockhold, saying that after the two worked together, he was the uncrowned Strikeforce middleweight champion.

Bisping, best cherub face on, says it’s all much ado about nothing.

“For me, there really is no bad blood,” he said. “Don’t get me wrong, I don’t care for the guy and I think he’s an absolute idiot and I’m looking forward to getting the chance to fight with him and settle this once and for all. But what I’m doing is winding this guy up and he’s just going crazy. He’s biting every time. And when I’m with him, you can see it on his face – he’s literally fighting the urge to get up and punch me in the face. So I love it. I’m getting a complete kick out of it. I said this comment about sparring and I was having a laugh. I was just kidding around, I put my foot in it and I apologized, and listen, I’m the first to realize that what happened in a sparring match isn’t going to really have any bearing on how a fight is going to go down when we’re both fully prepared. So I was just trying to be entertaining on a TV show and ever since then he’s never forgot about it and he keeps going on about it, so of course, in typical Bisping fashion, I keep firing shots back.”

And in typical Bisping fashion, there are those who love him and those who hate him, but the haters are starting to get drowned out by his supporters, and that could be because there is a desire to see The Count get a crack at the middleweight title sometime in the near future. He’s been close before, but key losses at inopportune times killed off his chances. That could be said for a lot of fighters, yet when some of those Bisping has lost to over the years, including Vitor Belfort and Chael Sonnen, have been in the headlines regarding usage of the now banned Testosterone Replacement Therapy (TRT), the Brit suddenly gained even more of a following among hardcore MMA fans. But he’s not bitter about those losses or the circumstances surrounding them.

“I knew what I was getting into,” he said. “I signed on the dotted line to fight these guys and some of them were on TRT and things like that. As a fighter, you just have confidence in yourself and you believe you can win these fights. You think you can overcome it. You really do. Then perhaps when you sit down with a coffee and you look back and think, you say maybe that wasn’t the right decision. But at the time I was happy to take those fights, I was happy for the payday, so you can’t be bitter. You can’t look back in anger and look for excuses as to why those losses are on your record. You just have to be a man about it, dust yourself off and get back in the saddle.”

Michael Bisping is back in the saddle and ready to ride into Sydney with the goal being another victory. It’s not about bad blood with Rockhold; it’s about getting the W and making a case for a shot at the belt. If he gets that shot, it would be one of the feel-good stories in the MMA world, and that may be something his detractors would have never expected. He likes that though. It keeps ‘em guessing.

“I’m going down to Australia to win a fight,” Bisping said. “I’m not going down there to settle some big grudge. He is. He’s going down there to prove to everybody that he can beat me because he’s insulted about this sparring match thing, and that’s great. Will that throw him off his game plan? I don’t know. Will he fight to the best of his ability because of it? Maybe, maybe not. For me, I’m just enjoying the ride and winding this guy up so much, but when it comes down to it on the night, I’ll be all business, and it doesn’t matter whether it’s Chris Weidman, Luke Rockhold, or Cung Le, I will fight exactly the same way.