Unofficial Half-Year Awards: The Newcomers of 2013 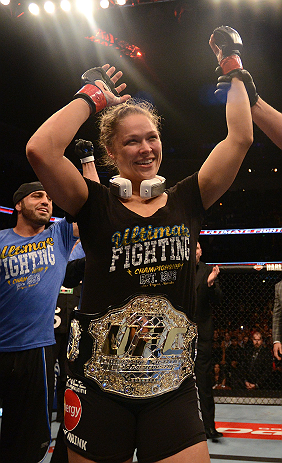 And so it begins. With half of 2013 in the books, it’s time to recap the top fights, fighters and finishes of the year thus far, and what better place to begin than with those who entered the Octagon for the first time this year?

5 - Conor McGregor
If you could capture the “It” factor and bottle it, you would be a billionaire. Thus, explaining it can be difficult, but you still know it when you see it. Ireland’s Conor McGregor has that “It” factor and it was evident even before he made his UFC debut in April against Marcus Brimage. The question was, would he deliver on fight night? Did he ever, holding off a furious start from “The Bama Beast” to score a 67 second Knockout of the Win victory. And the buzz just keeps getting louder for the 24-year-old, who will have plenty of supporters on hand in Boston when he makes his second Octagon appearance against Andy Ogle.

4 - Tyron Woodley
If he got the decision in last Saturday’s UFC 161 bout with Jake Shields, former Strikeforce contender Tyron Woodley might have been a couple notches higher here, but despite being the only person on this list with a loss in 2013, he is without question one of the top UFC rookies of the year thus far. Debuting with a 36 second knockout of Jay Hieron in February, Woodley was seen by many as the victor against Shields after their three rounder in Winnipeg, but the former world title challenger got the split nod. Now it’s up to Woodley to make another Hieron-esque statement when he returns to the Octagon for UFC bout number three.

3 - Ronaldo Souza
Brazil’s Ronaldo “Jacare” Souza was always a killer when it comes to jiu-jitsu, and he’s got the grappling titles and MMA submissions to prove it. But after losing his Strikeforce middleweight title to Luke Rockhold in September of 2011, he’s turned it up a notch in the rest of his MMA game, and he’s become dangerous everywhere against everyone. In May, he made his Octagon debut against always tough Chris Camozzi, and I can’t recall an arm triangle choke putting someone to sleep as fast as Souza pulled the trick on Camozzi. He’s a finisher, he’s a technician, and he’s a threat to anyone at 185 pounds. Anyone.

2 - Kelvin Gastelum
With only one UFC fight to his name, a hard fought split decision win over Uriah Hall to take the Ultimate Fighter 17 season title, you may wonder how Kelvin Gastelum made it to such a lofty spot on this list. But look a little deeper and it’s no surprise. This 21-year-old from Arizona was the underdog from the moment he stepped into the TUF house, but he still ran off four wins, finishing three of them, before beating the heavily favored Hall in the finals. This kid may not be flashy, but he has one thing you can’t teach: he’s a winner, and we’re likely to be hearing a lot more from him in the future, starting with an August 28 bout with longtime welterweight standout Paulo Thiago.

1 - Ronda Rousey
Rondamania had been going pretty strong back when the Armbar Queen was dominating Strikeforce, but it seemed like it didn’t truly take off until it was announced that Ms. Rousey was going to be coming off the UFC and pioneering the promotion’s new women’s division. That’s enough pressure. Add in the seemingly endless media obligations and distractions and you would think that she could easily forget that she had a tough opponent – Liz Carmouche – training to knock her head off her shoulders. But Rousey didn’t forget, and after getting out of some early danger, she not only finished Carmouche and retained her UFC women’s bantamweight crown for the first time; she did it in typical “Rowdy Ronda” fashion: via armbar in the first round. Now that’s impressive.