The Unlikely Return of Jamie Varner

"There’s nothing like hitting rock bottom to show you the things you took for granted." - Jamie Varner 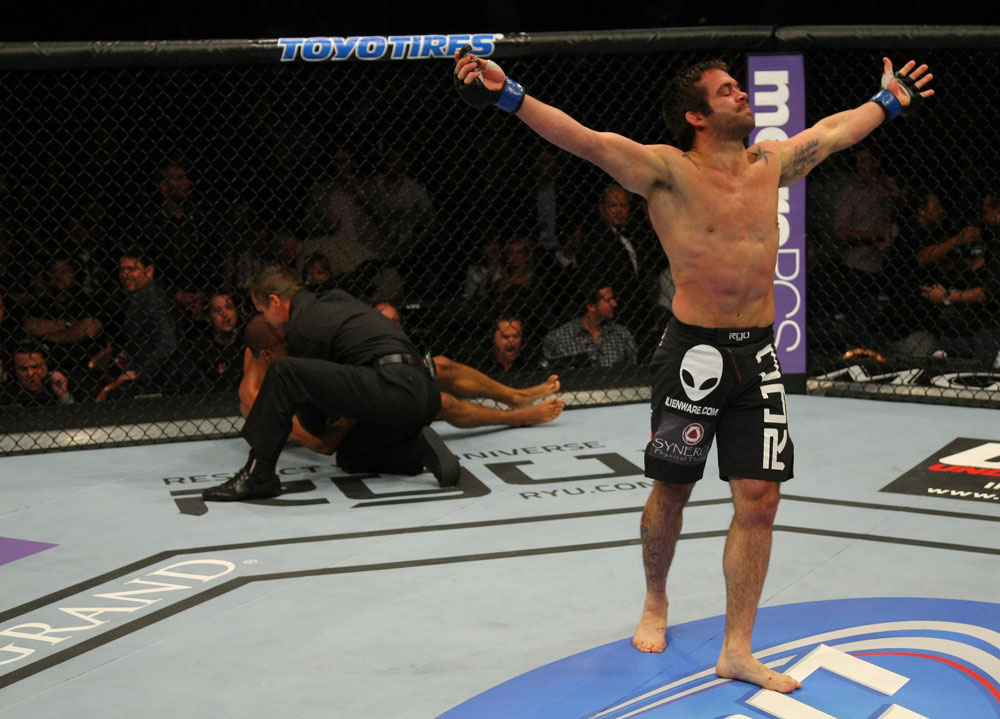 People scoffed when the UFC announced that Jamie Varner would be the man to replace Evan Dunham against Edson Barboza at UFC 146. They envisioned a one-sided sparring session for the fast-rising Brazilian Muay Thai specialist; another dominant performance, another victory, and another step closer to title contention. In the eyes of many, Varner was being led to the slaughter.

His experience didn’t matter. The fact that Varner first stepped into the Octagon as a 21-year-old meant nothing. Neither did his reign as the WEC lightweight champion. That was a long time ago as far as the fight game is concerned, and a lot had happened to Varner in the interim.

A four fight winless streak culminating in a first round submission loss to Shane Roller on the final WEC card left him without an invite to join the others who called the little blue cage their home in moving to the UFC when the companies merged in January 2010. He was controlled and beaten by Dakota Cochrane at a regional event nine months later, abruptly announcing his retirement after the bout, only to retract his statement a few days later.

Though he earned a pair of first round finishes in a small show heading into the contest, beating regional journeymen and stepping under the brightest lights in the business against a fighter everyone had tabbed for stardom were like comparing apples and cinder blocks. No one gave Varner a chance, but that’s because no one knew the journey the former WEC standout had been on in his time away from the spotlight.

“I would have to say that a lot of it was just growing up, to be honest with you,” explains Varner, speaking candidly about the course his career has taken thus far. “I was 21 when I had my very first fight in the UFC. I was a world champion for the WEC at 23 years old. I had a lot of growing up to do, man. I was young, and I didn’t quite know how to handle all the pressure, I didn’t know how to handle the business side of things, or even all the attention. It honestly took me going through those ups and downs – getting fired, losing my job with Zuffa, hitting rock bottom – to really appreciate what I had and what I have, and it definitely puts things into perspective.

“Everything has just fallen into place,” he says of the voyage that has him ready to face Joe Lauzon on the main card of the UFC’s fourth event televised on FOX this Saturday.

While his record shows a victory over Nate Jolly as the starting point for his recent resurgence, the truth is that the beginning of Varner’s turnaround came prior to his loss to Cochrane.

Before he was a hopeful on Season 15 of The Ultimate Fighter, Cochrane was just another up-and-comer looking to make a name for himself on the regional circuit, called upon as a late replacement when Varner’s original opponent fell out at the 11th hour. Cochrane couldn’t make the contracted weight, but Varner opted to fight instead of walking away. Though the fight would turn out to be the lowest point of a very bad stretch for the Arizona Combat Sports product, it was also the catalyst for the career renaissance Varner is now enjoying.

“I took that fight, and I fought for all the wrong reasons,” Varner recalls of the bout with Cochrane. “(I was fighting for) the reasons that I told myself years ago that I wouldn’t be fighting for, and that I would (make me) stop fighting. I fought for the money, and because it’s what people wanted me to do, and not because it’s what I had in my heart. I felt like I had to fight, as opposed to wanting to fight. That fight was horrible, and I felt bad being in that situation, so I came home and regrouped.

“I had a point in my career where I had lost four out of six fights, and I suck at losing,” he says, a chuckle chasing the frequent fighter admission. “I’ve never been a good loser. It doesn’t matter if it was chess, checkers, video games – I don’t like to lose. I suck at losing. Going through all those losses, I forgot how to win, and every time I lost, it was kind of like a downward spiral – I’d put even more pressure on myself to win because I didn’t want to lose my job or I wanted to make more money or win the fans back or earn their respect. I kept putting pressure on myself, and I didn’t enjoy the training.”

Varner says he’d fixate on the one or two mistakes that he made in practice, and get down, unwilling to allow himself an off day in the gym.  Though he could spin similar missteps into a “Don’t be so hard on yourself; you’re doing great” moment for a teammate, training partner, or student, it took his mom telling him to do the same for himself for the once-again relevant lightweight to ease up on himself.

“That just clicked in my head,” he admits. “I was always so hard on myself; I’m such a perfectionist, and I always put so much pressure on myself to win that I lost track of why I did this and why I’m a fighter, which is to one day be the best. I have this dream to fight and compete, and it’s fun, and it’s a great job.

“I get to do what I love to do. Not many people get to say that, and I completely lost track of that in the past, and it took me a while to understand that. It also took having all the right people in the right places to remind me of that too. I’m living my dream, and I need to honor that, respect that, and cherish that because it’s not going to last forever.”

Refreshed, refocused, and having worked his way back from the brink of wanting to walk away from the sport, Varner pulled off arguably one of the biggest upsets of 2012 back in May. He shocked those who gave him little chance of surviving Barboza by dominating the previously unbeaten prospect, sending him crashing to the canvas under a barrage of punches in just over three minutes.

The win put Varner back on the map, but there is still work to be done; one victory does not a contender make. Fully aware of this and ready to prove those who are still unconvinced of his return to elite form, Varner agreed to step in against Lauzon when Terry Etim was forced to the sidelines due to injury. Like the Barboza fight, it’s an opportunity the 27-year-old couldn’t pass up, one he frequently describes as win-win, and one that comes with the added bonus of being on FOX.

“To beat a guy like Joe Lauzon, it catapults my career, and legitimizes my first win. I do see some stuff online where people think what I did with Barboza was a fluke, even though I dominated the fight. It wasn’t like I was getting my butt kicked and landed that one lucky punch. I think it will help legitimize me and it’s a step in the right direction.

“Also, being on FOX,” he continues. “Hopefully we’ll have a rating with eight million viewers watching the fights, and I’ll be able to show the world all the sacrifices that I’ve made, and all the struggles and adversity I had to overcome just to make it to this one moment to entertain them. It’s just such a great opportunity.”

Paired with one of the most decorated bonus winners in UFC history, there’s a very good chance that Varner and Lauzon will send the fans home happy on Saturday night. If he emerges victorious, Varner knows he’ll have worked his way into the small group of contenders vying for a chance to fight for the title. Before he can start to think about the future, he’ll have to worry about deal with the task at hand, one he believes will be the toughest of his nine-year, 29-fight career.

“The right thing to say is that I can’t overlook Joe and blah, blah, blah, but it’s human nature; you can’t help it. I can’t help but wonder what would happen if I win, and I would have to think that the guys that have beaten Joe are in the top 10 or are thought to be contenders, so I’m just going to go with that. If I beat Joe Lauzon, I’m a top contender. I’m not going to say I’m going to be fighting Gray Maynard or Anthony Pettis right away for a #1 contender spot, but I’ll probably be in the conversation, I would say.

“But my main focus is on Joe Lauzon, and he’s quite the obstacle,” adds Varner. “He poses quite a lot of threats in different areas because he’s so well rounded. He’s tough. He is very smart, calculated, and methodical, and it’s going to probably be my toughest fight to date.”

Six months ago, no one would have believed that Varner would be fighting on the main card of a UFC event on FOX with a place in the upper echelon of the lightweight division at stake. A few days from now, that’s exactly what will happen. It’s the next step in a journey of rediscovery and redemption for the former WEC champion, a trying journey that has rekindled Varner’s passion for fighting, and reshaped the expectations he puts on himself as he prepares to step into the cage.

“I think it’s a more interesting story (this way), and it shows my character. My character was in question for many years in the WEC, and I think to have to overcome some of the things I’ve overcome and fight my way back into the organization, I think it says a lot about me and who I am. I also feel that everything happened for a reason, and honestly, I wouldn’t change anything.

“I’m still young,” states Varner, who started his career in March 2003 and will be stepping into the cage for the 30th time in his career when he meets Lauzon Saturday night at STAPLES Center in Los Angeles. “If you had a guy coming into the sport at 27 years old, you’d still think, `this guy’s pretty young for the sport.’ Well, I’ve already been in this sport for so long and I’m still only 27. There’s a lot of years left, there’s a lot of fight left in this dog. I’m really excited to be here, and I’m really excited for this opportunity.

“I’m not putting all this pressure on myself to win; I’m just enjoying it. The only thing I can control is how hard I fight and how hard I train, so I’m just going to go out there and fight with every bit of my being, and whatever happens happens. I’ve (always) been (in exciting fights), so I know that if I lay it all on the line people are going to enjoy seeing me fight.”

Win or lose on Saturday night, Varner has once again found his passion for fighting, and getting the opportunity to do it on the biggest stage in the sport, a privilege he can truly appreciate after taking the long way back to the UFC.

“There’s nothing like hitting rock bottom to show you the things you took for granted.”