Unknown No Longer, Pepey is One Win Away From Glory

"I think I will give people something to talk about in this final, you will see." - Godofredo Pepey 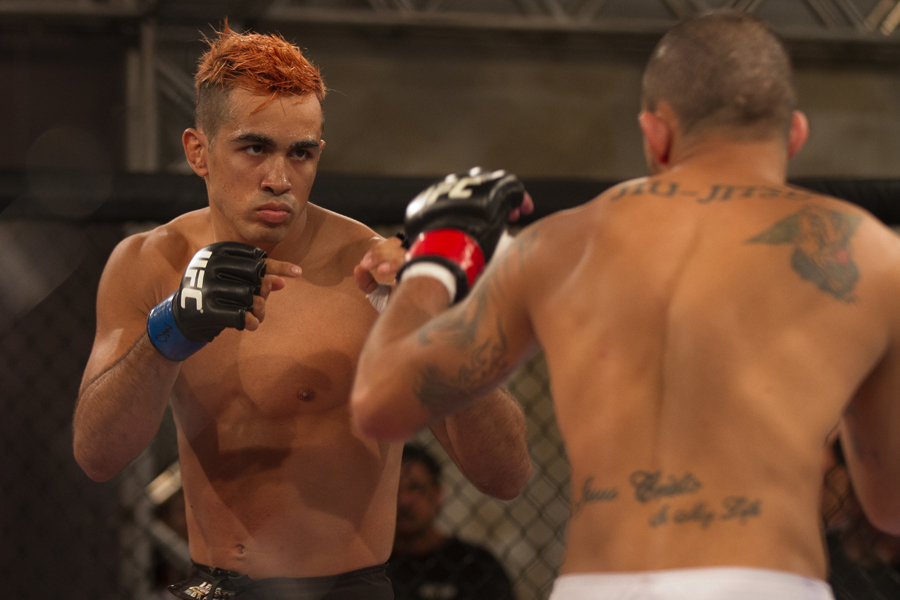 Despite being undefeated in mixed martial arts, Godofredo Pepey was an unknown fighter to the majority of the public a few months ago.

That was then. Now, after showing his fighting potential and not only guaranteeing himself a spot on the first edition of The Ultimate Fighter Brazil, but one in the featherweight final of the reality series as well, he is one win on June 23rd in Belo Horizonte, Brazil away from earning a UFC contract.

In his first challenge on television, Pepey used his extremely dangerous triangle choke to beat Johnny “Cabeça” Goncalves on the ground and earn a spot in the TUF house. After that, he stayed alive in the competition by beating Wagner “Galeto” Campos by split decision in a very close fight. But when the pressure was on to earn a place in the final against Rony “Jason” Mariano, he used a kimura that made Marcos Vinicius “Vina” tap three times in the second round. So with one more victory, the fighter can reach the place he has wanted to be for a long time.

“The expectations are huge,” he said. “Fighting on the main card of the UFC is already a dream come true. Even more so that it’s the reality show finale and on a big event. To have that chance, I went trough a lot of difficulties: I had no manager, no sponsors, and I come from a humble family. It was not easy to get here, as there were only top athletes in the house. Now, I think I will give people something to talk about in this final, you will see.”

Indeed, his way to the top was not easy. Coming from a humble family, Pepey was led to fighting through his brother. From the time he was 14 years old, he specialized in jiu-jitsu, his main skill and one that made him get submission wins in six pre-TUF fights. However, this will also be the main skill of his opponent at UFC 147.

“Rony ‘Jason’ is a great jiu-jitsu fighter, he does not run from the fight on the ground, and just like myself, he has the same goal: the submission. But in MMA, we have to be well rounded and train a little bit of everything. I work in all the areas, and I am a black belt in Muay Thai. I will be ready to trade standing up, and I will also fight on the ground… I really do not have a preference.”

Mariano won 10 of his 13 pre-TUF fights, all of those victories coming before the sound of the final bell, nine of them in the first round. He will be a top-notch adversary, one who has trained under two icons of the sport, Rodrigo “Minotauro” Nogueira and Rogerio “Minotouro” Nogueira.

“‘Jason’ is a complete fighter, both standing up, trading punches or on the ground. He is an excellent fighter,” said Pepey.

But the reality show itself also brought much experience, as Pepey went through an interesting situation during TUF Brazil. He started fighting for the team that was led by Vitor Belfort, one that opened a huge 7-1 lead in the competition.  The gap was so wide that UFC president Dana White started making some changes. To even the teams, Pepey was tasked to represent Team Wanderlei, and his first concern was having to fight the team that had been training him since the beginning of the first episode. In the end, all the fighters in the house knew his fight game. But the victory came in the semifinal, and now Pepey will have an opponent in front of him who had also been his training partner on Team Wanderlei.

More than that, Pepey and Jason are from the same state in Brazil, the state of Ceará. They both have very similar life stories in terms of the sacrifices they’ve made to get here, and now they are face to face, fighting for the same goal. Does that add an extra weight on them?

“I am glad that Rony and I could show the value of our state on the fights, and we are proud of that. But regardless of where the person comes from, when we are in the Octagon, it will be a war,” he assures.

“I know that it will be a good fight and I will come well prepared. It will be a good show for the crowd because Rony is an excellent athlete and I want to impress everyone in this final. I will give everything I have in this challenge.”