From unknown to champion, Invicta's Livinha ready for more 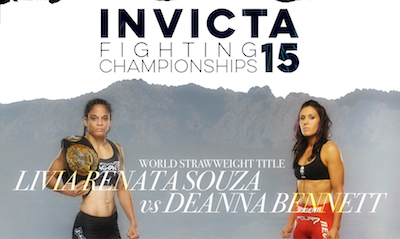 In her first pro fight out of her city, country, continent and even hemisphere, Livia Renata Souza won a world title.

On April 24 of last year, an undefeated submission artist from the state of Sao Paulo, Brazil made her Invicta FC debut in a strawweight championship bout and stunned the Kansas City crowd with a fourth-round victory over Katja Kankaanpaa. If that wasn’t incredible enough, Souza had turned pro only 25 months earlier. And yet, “Livinha” had complete confidence she would win.

“Although few believed, and the U.S. and foreign public see me as an unknown at that moment, I knew I would win,” Souza said. “It was my international debut, but I felt ready. It did not dazzle me or impress me because I have competed since I was six years old. Also, I have traveled to other countries to compete for judo. I was just doing my job, like another day at the office.”

UFC FIGHT PASS is your home for Invicta FC 15. Tune in Saturday, January 16 at 9 pm ET

The 24-year-old, who was born and raised Araraquara, Brazil, went from owning a 7-0 pro MMA record with six sub stoppages in local shows to getting on a jet plane bound for America’s Midwest to give a crowd-pleasing performance that ended with gold around her waist. At Invicta FC 12, Livinha tangled with the impressive then-strawweight champion Kankaanpaa, owner of a 10-1-1 pro record. Honestly, Souza almost didn’t need four rounds, as she came close to securing a rear naked choke in the opening period.

“In the first round, I got a good position to score well,” Souza said. “I tried to tighten it (the choke) enough, but I could not fit my arm under the neck. I always kept calm because I know that my game is able to bring me victory anytime.”

The opening frame was Souza’s, as she took Kankaanpaa’s back against the fence and hunted for that rear naked choke in between landing punches. Rounds 2 and 3 got grimy, as the “Killer Bunny” landed decent ground-and-pound on Souza as both appeared keen on keeping the fight on the floor.

In what would be the final stanza, the Team Maximo and Atos Jiu-Jitsu prospect caught Kankaanpaa in a triangle choke off her back, and Souza squeezed and threw elbows until Kankaanpaa tapped.

“All credit goes to my coaches Kleber and Vinicius Maximo, who taught me jiu-jitsu practically from zero,” Souza said. “I train at Team Maximo and Atos Jiu-Jitsu, a renowned school of world champion athletes of jiu-jitsu. We are a team of talented youngsters still evolving in MMA. I have excellent partners and training specialists in jiu-jitsu. My greatest virtue on the ground is being able to finish the fight from any angle or position. I have an arsenal of varied attacks.”

Improving her stellar record to 8-0, Souza is a pure finisher from beginning to end. The Kankaanpaa stoppage is the latest on her record, but Souza also has three submission wins in under a minute each. Also, she’s not kidding about being “varied,” as her finishes consist of three armbars, two triangle chokes, a rear naked choke and a heel hook. Regardless of who stands in front of her, Souza simply views them as another W to add to her growing list.

“My mentality is the same, I think only about winning,” she said. “I do not see faces, only numbers. I know that if I put my game into action, she will not be able to stop me. I see my hand raised only. Whatever will occur in the meantime is just detail. The fans know that I am more dangerous and explosive, besides having better cardio. I just hope she makes the weight.”

This Saturday, Livinha will make her first title defense at Invicta FC 15 against a fellow undefeated rising star in DeAnna Bennett. With eight straight wins, four coming in Invicta FC, “The Argentine Assassin” truly earned her title shot with a TKO in her promotional debut, followed by three unanimous decisions, including her most recent one over former champ Kankaanpaa. The Orem, Utah native has impressed fight fans and judges in her four Invicta FC bouts, but not Souza.

“I watched (Bennett versus Kankaanpaa) once, I think Katja won,” Souza said. “She got some positions to finish the fight on Bennett, but could not finish the fight. I guarantee that if I were there with those same opportunities in the fight – the fight would have ended. I noticed some things she likes to do, but I'm not worried about her strengths, but about mine. After all, the champion is me.”

While Bennett is the focus now, Livinha believes her time as champion will not end in Invicta FC, but will continue into the UFC. The ever-confident Souza is far from shy in her estimation that she could slip right into top contention inside the Octagon. With what she’s done so far in Invicta FC and with a big opportunity this weekend, it’s tough to argue with Livinha’s view on where she would fit into the weight class.

“I think it’s a great division,” she said. “But I do not quite understand the criteria of having some very technically weak fighters, who are not media savvy, are tedious and have no high-profile fights to be there as part of the rankings. I could easily be fighting the top five. I hope to have a chance to prove it soon.”

But first, on January 16 at Invicta FC 15 on UFC FIGHT PASS, Souza puts her strawweight title on the line against Bennett.

“I always do exciting and full of action fights,” said Souza, who aims to expand her win column and fan base in her second trip to the U.S. “I understand the audience will cheer more for her because she is a native of the U.S., but at the end of the fight, everyone will be celebrating with me. MMA has no nationality. The public loves winners.”