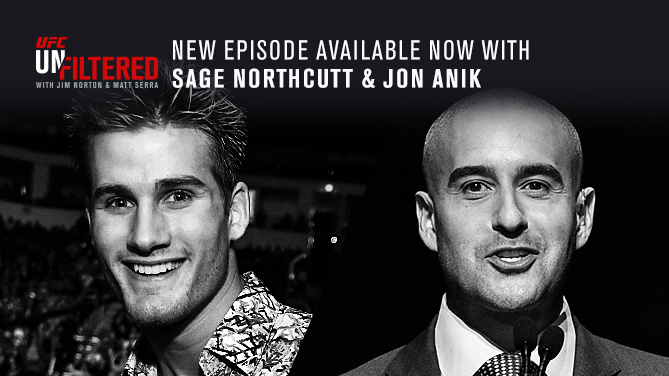 "Super" Sage Northcutt, fresh off his first UFC Welterweight win over Zak Ottow in Boise, calls in to discuss the fight, working on his ground game at Team Alpha Male, how he'd match up with Mike Perry, and a lot more, including answering fan questions. Then, lead UFC Play-By-Play man Jon Anik calls in and discusses a wide range of topics including DC winning the UFC Heavyweight title, JDS vs. Blagoy Ivanov, Ngannou vs. Lewis, Brock Lesnar's potential UFC return, judging problems in MMA, and more. Plus, Jim and Matt break down the action from UFC Fight Night Boise and talk about DC and Yoel Romero going back-and-forth on Twitter about a Light Heavyweight title fight.

Sage on working his ground game at Team Alpha Male:

Sage on how he ended up at Team Alpha Male:

Sage on fighting back at Welterweight:

Jon on the judging at UFC Boise, and the scoring system overall: