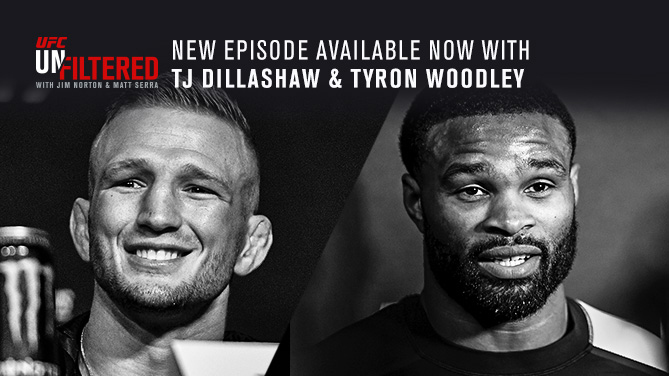 UFC Bantamweight champion TJ Dillashaw calls in and discusses his UFC 227 rematch with Cody Garbrandt, why the fight with Demetrious Johnson didn't come to fruition, Marlon Moraes as a potential number one contender, how his perspective has changed since the birth of his son, and more. Later, UFC Welterweight champion Tyron Woodley joins the show and talks about a matchup with Colby Covington, potentially becoming a fan-favorite in their fight, being willing to bet $10,000 a takedown, training with Floyd Mayweather, doing standup comedy, and more. Plus, the guys recap Week 1 of Dana White's Tuesday Night Contender Series, PVZ's broken arm, and Mighty Mouse vs. Henry Cejudo 2.

TJ on moving on from Mighty Mouse to Cody Garbrandt

TJ on being able to blend all his techniques together

Tyron on why Colby Covington's cardio won't matter when they fight

Tyron is willing to bet Colby Covington $10,000 per takedown

Tyron on becoming a fan favorite against Colby Covington