"I’m really excited about this next fight. He (Rivera) is super dangerous, very aggressive, and I’m the same way, so it’s gonna be very exciting." - Alex Soto 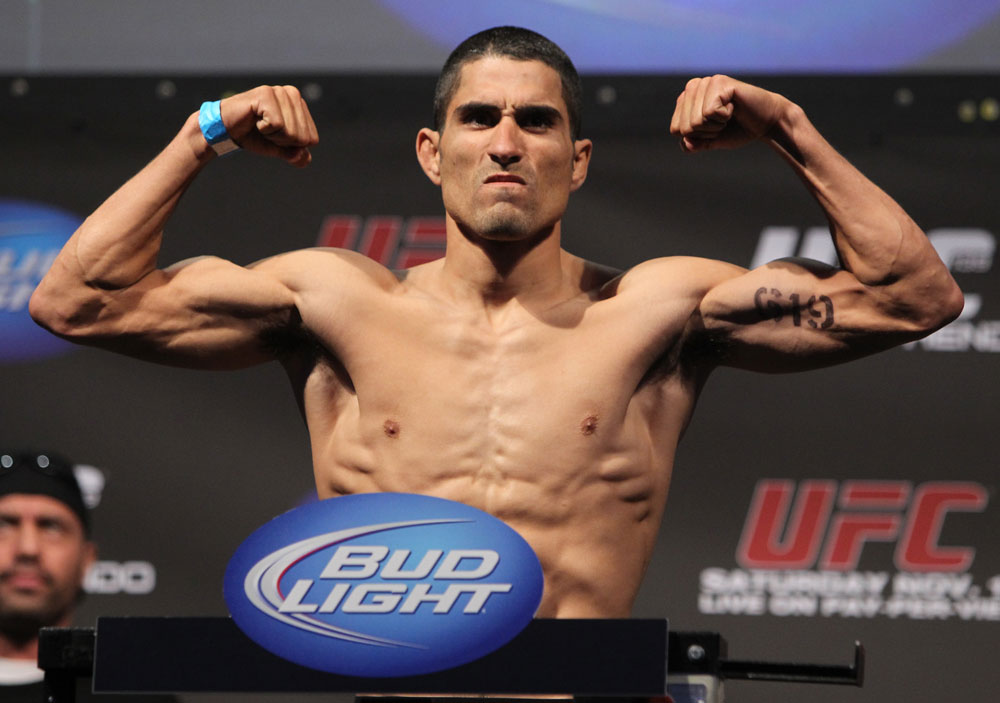 He’s fought a war in Afghanistan, helped his wife through a battle with cancer, and even trains dolphins. Turns out that Alex Soto’s talents don’t end there, as now he can apparently even see the future.

“I kinda saw this coming,” smiles Soto, referring to his UFC on FUEL TV bout with Francisco Rivera this Tuesday in Fairfax, Virginia.

First a little background. Originally slated to face Octagon newcomer Azamat Gashimov on the card, Soto instead got matched with another UFC debutant Chico Camus, when Gashimov withdrew from the fight due to injury. No big deal for the San Diegan, who said “The opponents switching and everything, that’s something I’m used to, and it’s something that happens a lot in this sport. In fact, Azamat was signed a while ago and he hasn’t fought in the UFC, so I was thinking ‘man, this guy must be training for a long time, he’s real excited about fighting in the UFC, and he’s probably gonna overdo himself somehow.’ And I was kinda prepared for that. So I wasn’t too surprised.”

Yet after signing for the Camus bout, a routine tape watching session produced an interesting conversation between the bantamweight prospect and his wife Joy.

“The day before I got called and was told I was going to fight Rivera, I was actually watching videos on him. I said ‘This guy’s good.’ I looked at my wife and said ‘I’ve got a good feeling I’m going to fight this guy. If I was a matchmaker, I’d put us together. We’re on the same schedule of fighting and we’re lined up; it’s like the perfect matchup.’”

Only problem was, after losses to Erik Koch (in the WEC) and Reuben Duran (in the UFC), Rivera wasn’t in the Zuffa organization anymore. But when Camus pulled out of the May 15th event due to injury, Rivera – winner of two in a row on the local circuit – got the call to return.

His opponent? Alex Soto. And Soto couldn’t be happier.

“I’m really excited about this next fight,” he said. “He (Rivera) is super dangerous, very aggressive, and I’m the same way, so it’s gonna be very exciting.”

It’s not a shocking reaction, given the fact that the 28-year old Soto has dealt with a lot more stressful situations in life than just having opponents change on him. And the excitement in his voice is palpable, not just because he has a willing combatant in front of him, but because he’s about to get the opportunity to rebound from his first pro loss against Michael McDonald at UFC 139 last November.

The lead-up to the McDonald fight was a lot different than it is for most debuts, as Soto (a late replacement himself) garnered a ton of positive media coverage for his amazing story. It seemed like every day before the bout produced another Alex Soto story, yet despite having to deal with these pulls on his time while preparing for one of the best 135-pounders in the game and having to make weight, Soto took everything in stride. The fight though, that was another story, as McDonald ended matters 56 seconds into the first round.

Ask him six months later about the bout and whether all the media attention distracted him, and he has no extraneous excuses for the loss. In his eyes, he made a mistake, he paid for it, and now it’s time to move on.

“It wasn’t difficult,” said Soto of dealing with all the added attention before the biggest fight of his career. “I was just out of character during that fight. I was very excited and very happy to be there and to get the opportunity to fight somebody who I had been a fan of. It didn’t overwhelm me, but the focus wasn’t there. You hear about the Octagon jitters and I wanted to break that; I didn’t want to have that. I wanted to just go out there, perform, and put on a good show, and in the course of it, I ended up making a huge mistake and paying for it. That’s how it is.”

Of course, McDonald hasn’t skipped a beat, issuing the same kind of devastating defeat to former WEC bantamweight boss Miguel Angel Torres at UFC 145. Not that it’s any consolation to Soto, who lost for the first time in eight bouts.

“I’ve never been knocked out,” he said. “I thought I could take a giant punch, but he got me right on the button. But it’s something that I keep telling everybody, that I’m gonna meet that guy sooner or later again, I just know it.”

To get there, Soto had to right his ship and make sure he doesn’t commit the same mistakes in the future that he did against McDonald. That was the tougher part, but with his team in San Diego, he’s confident that the right adjustments have been made.

“It was really rough after that fight,” he admits. “I had to focus and concentrate and be true to myself and re-evaluate my mental state. A huge part of this is the mental game, so I really have a great team of mentors and coaches and we worked through the growing pains. So I can’t wait to go out there and give it a good try and do what I do best, and that’s competing and fighting at a high level. Before every fight, I kinda have a theme, and for this fight, we have to fight smart and keep our composure. That’s the big key to this fight, to be the smarter fighter and the more skilled fighter. That’s what it’s gonna take for this one.”

So is the Alex Soto crystal ball giving off good vibes for this Tuesday’s meeting with Rivera?

“I’m very excited just to have another shot,” said Soto. “I feel like I really didn’t get to showcase my abilities in the last fight, so I’m looking at this as a great opportunity to get out there and really show the fans that ‘hey man, I don’t suck.’ (Laughs) I’m here because I’m good and because I’m good and I can hang with these guys.”