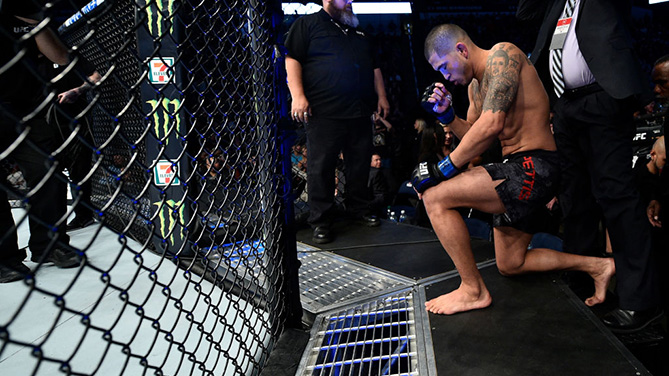 Anthony Pettis prepares to enter the Octagon prior to facing Dustin Poirier in their lightweight bout during the UFC Fight Night event inside the Ted Constant Convention Center. (Photo by Brandon Magnus/Zuffa LLC)" align="center" />Anthony Pettis didn’t feel right walking into the cage against Dustin Poirier last November, which only makes him more frustrated about the way things played out in Norfolk, Virginia.

“I didn’t feel too great in that fight, which is something I was kind of pissed off about,” he said, reflecting on the bout just a few days prior to his return to the Octagon against Michael Chiesa at UFC 223. “Warming up for the fight, my energy was really low. I’m not sure what it was. We were trying to figure it out this camp, but I had to push through it.

“It was one of those fights where I just had to dig down deep. It wasn’t a very technical fight, but I just went out there and fought. I love what I do – I love fighting, I’m not afraid to mix it up and I think I showed that in that fight. I wish I had gotten the win, but s*** happens.”

Despite feeling sluggish stepping into the cage, the headlining clash turned into an exhilarating battle between the WEC alums – a fight flecked with good striking exchanges on the feet, entertaining scrambles on the ground and Pettis’ blood being used to paint the canvas and everything else it came into contact with.

Even after getting cut, the former lightweight champion stood up at the close of the second round with a look of excitement in his eyes, as if he’d shaken off the lethargy that plagued him early and been spurred on by taking the best Poirier had to offer over the opening five minutes.

Unfortunately, Pettis was forced to tap unexpectedly midway through the middle stanza, bringing the entertaining encounter to an abrupt halt.

“I wanted to keep going, but the body triangle was tight and when I tried to twist out of it, I popped a rib,” explained the 31-year-old veteran. “At that point, I had the blood on me, the rib popped and in my head I was like, ‘I don’t know how bad this rib is.’ It freaked me out because I heard the pop and I felt the pressure.

“I think if it would have kept going, I was getting more energy and feeling better in the fight, but you can’t cry about it. You’ve got to just keep pushing forward.”

Trying to keep pushing forward is something Pettis has been doing for nearly three years now, ever since he dropped the lightweight title to Rafael Dos Anjos at UFC 185 in Dallas in March 2015.

He lost his next two fights before an ill-fated two-fight foray at featherweight, which ended with the first stoppage loss of his career. Returning to lightweight last summer, Pettis notched a unanimous decision victory over the Jim Miller, a performance he thought would be the start of a second run towards the title.

Instead, things didn’t go his way against Poirier and he’s right back at square one this weekend, staring down a matchup with Chiesa Saturday night in Brooklyn, hoping to get his 2018 campaign started with a victory and show that he still has what it takes to compete against the best the lightweight division has to offer.

“I’m not worried about what I’ve done in the past – my losses or my wins; none of that matters,” said Pettis. “It’s about what I’m doing right now.

“I busted my ass this training camp. I didn’t cut any corners. I sparred every sparring session as hard as I could. I put myself in that uncomfortable zone again so I can be comfortable there and I’m just excited to get out there as a healthy Anthony Pettis. I’m excited to show what I can do.

“I know what I’m capable of. I know that when I feel right, no one can stop me out there and I’ve just got to find that recipe again to consistently get back to that spot.”

That’s why he asked for this matchup with the former Ultimate Fighter winner Chiesa.

Given his pedigree and his recent run of results, Pettis could have sought out a different opponent or accepted a bout against one of the various fighters stationed below him in the lightweight rankings that were brought forward by the UFC matchmakers.

Instead, he surveyed the division, picked out the one Top 10 fighter that was without a dance partner and put in his request.

“I requested Mike,” he said. “He was a free name in the Top 10. Everyone else was kind of matched up and committed to something already.

Over nearly seven years competing in the Octagon, the Milwaukee native has consistently mixed it up with the best and brightest in the 155-pound weight class, plus a couple talented featherweights.

Each victory was followed by another step up the competitive ladder and another difficult matchup; every setback chased by an equally challenging pairing designed to get him right back into the title conversation.

There have been no layups and there never will be because Pettis only wants to face opponents that will help him get closer to claiming lightweight gold for a second time, and if ever there comes a time when he wavers from that approach, that’s when he’ll call it a career.

“I’ve never lost that vision. I think once I lose that vision, that’s’ when I’ll retire and be done with this sport,” he said. “I’m not trying to be a gatekeeper.”

He’s trying to get back to the lightweight title and he’s excited to restart that journey this weekend in Brooklyn.

“Obviously things don’t go your way always, but this is the first time (in a long time) where I’m seriously healthy – 100 percent, nothing wrong with me – and my weight is already on point. I’m amped. I’m excited to be here and I’m going to make sure I capitalize on this.”