"I'm still hungry to be the world champion, so I'm going to go out there, put on a career-defining performance to show the world that I'm not going anywhere." - Michael Bisping 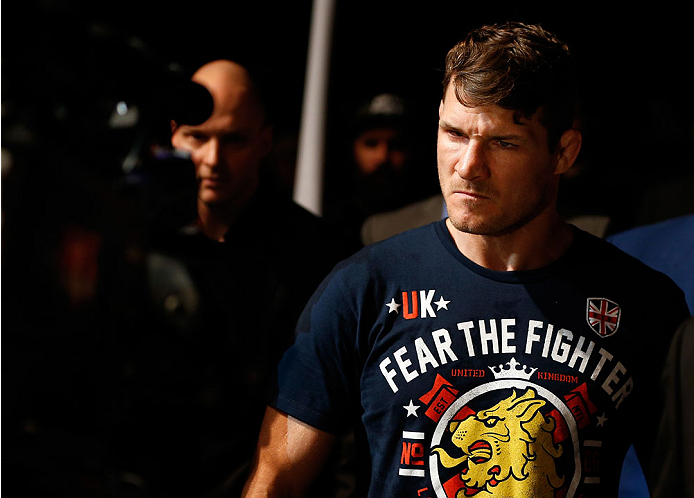 The fight before that, he earned a victory.

Copy and paste that pattern underneath his most recent two outings twice more and you’ve got an accurate, “Just the facts, ma’am” account of the last six appearances for the man known as “The Count.”

Bisping hasn’t won consecutive contests since he defeated Jason Miller in their battle following Season 14 of The Ultimate Fighter in December 2011. That victory pushed his winning streak to four and once again left him on the brink of securing a title shot, but he was unable to keep his run of success going and he hasn’t been able to gather any momentum since.

Following each of his first five losses, all of which have come under the UFC banner, the 35-year-old middleweight has always managed to get right back into the win column the next time he’s crossed the threshold into the Octagon. Coming off April’s unanimous decision loss to Tim Kennedy, the perennial contender is aiming to keep that pattern intact by picking up a much needed win over former Strikeforce champion Cung Le in the main event of the first of Saturday’s two fight cards.

“It has been win one, lose one and that’s not good,” admits Bisping, speaking at a heightened pace, his tone and tempo underscoring the urgency he feels heading into this weekend’s encounter with Le in Macao. “That’s got to stop and believe me, it’s going to stop.

“Coming off a loss I’m very, very hungry. I’m hungry anyway, but now I’ve really got a point to prove because for a while people talked about will I ever come back? I did come back and now I’ve lost a fight, so I need to show the world that by no stretch of the imagination am I finished. I want to prove that I’m still hungry to be world champion and I know I have the tools to be world champion.

“This camp has been going very, very well and I’m hungry. When I came into this sport, my first 13 fights were all stoppages. Maybe I lost a bit of that nastiness along the way, but believe me, the nastiness is back; just ask any of my sparring partners. The nastiness is back and I’m here to put on entertaining fights and hopefully get my long-overdue title shot.”

Fans like to scoff at the notion of Bisping fighting for UFC gold, as ascending to a championship bout is the one thing that has eluded him during his career. He’s been close in the past, but every time he’s needed to secure one more victory to punch his ticket to a title bout, the hyper-confident British fighter has come up short.

Hindsight is a wonderful thing and affords us all the opportunity to formulate explanations for what went wrong and speculate about a different way of attacking various situations, and it’s no different for fighters, Bisping included.

While many are quick to chalk his setbacks up to an inability to “win the big one,” the brash kickboxer from Manchester, England has a different take on his most recent setbacks.

“The Chael (Sonnen) fight was a ridiculously close decision that a lot of people thought I won,” he offers in regards to his January 2012 split decision loss to the two-time middleweight title challenger. “I don’t care what anybody says, but I guarantee that he was on growth hormone and all the other good stuff when we fought, guaranteed.

“Then Vitor Belfort – come on. I got caught with a head kick, but would it have been thrown quite so fast and quite so hard, would he have recovered so well if he wasn’t on TRT, which we all know he was? Now he’s competing without TRT, so therefore he didn’t need it. Either you need it or you don’t and now he’s competing without it, so he didn’t need it and had extra supplementation. Again, I sound like a broken record and a crybaby, but these are the facts.”

As for his bout with Kennedy, Bisping chalks that one up to bad decision-making on his part.

“With the benefit of hindsight, I never should have taken that fight so soon. I had a year layoff, multiple eye surgeries and I couldn’t train. For almost a year I was relegated to the couch. I couldn’t even do any cardio. I couldn’t do anything to get my blood pleasure up. When the doctors finally cleared me, I called the UFC straightaway and from there, they offered me a fight in seven weeks. I went from sitting on my ass and doing nothing for a year to fighting in the main event against a Top 10 guy who is a very strong wrestler.

“What I should have done was take a few months to ease back into training, work on my skills and blow off the cobwebs, but as I said, with the benefit of hindsight you can see everything clearly. I didn’t do that, but that is my excuse.”

He lets out a laugh, knowing what he’s said will draw snickers and snark from the portion of the MMA community that remains permanently critical of the polarizing prizefighter.

“It sounds like an excuse, but it’s the reality of the situation and that’s exactly what happened. Why did I take that fight so soon? I was eager to get back in there. Sitting on my backside for a year, I wasn’t earning any money and I’ve got a family to provide for. I’m in my prime, and I wanted to fight ASAP.

“All in all, I was too hasty - I should have taken a little more time.”

He didn’t and he lost, and now Bisping is standing at a crossroad.

Saturday’s main event matchup with Le is a pivotal contest that will go a long way in determining how the next chapter of his career will play out. A long-time resident inside the Top 10 in the middleweight division, Bisping’s place among the 185-pound elite is on the line this weekend, and ultimately so too are his hopes of one day fighting for championship gold.

A win keeps those dreams alive and gets him moving in the right direction again, while a second consecutive loss makes the road to the top even longer and potentially detours him from the title track indefinitely.

But it’s also about getting back in the cage and putting on an entertaining fight for the fans, something Bisping prides himself on, and the way his last appearance played out has left a sour taste in his mouth.

“My last fight, I didn’t win the fight, which was disappointing, but more important, it was just a terrible fight. Tim Kennedy did not want to engage. His game plan was clearly to take me down and hold me down, and he was successful in getting a few takedowns, but when he got me down, he didn’t really even try to do any ground-and-pound.

“He just clung to me for dear life and made it very boring. The crowd was booing and that pisses me off, so I wanted to come back and be involved in an exciting fight, a very crowd-pleasing fight.

“Cung Le has a crowd-pleasing style and I believe it plays into my hands. I can show the world what I’m capable of and Cung Le is the perfect opponent, the perfect opportunity to do that. (He’s) good at what he does - he likes to throw a lot of kicks and he’s obviously been successful, but in many ways, and I don’t mean this in a disrespectful way, he’s kind of predictable. He’s kind of a one-trick pony.”

For the former Ultimate Fighter winner, the game plan is simple and the only result he can imagine is the one that sets him back on the road to challenging for championship gold.

“It’s all a case of pressure. From the opening bell, I’m going to make it uncomfortable for Cung Le, I’m going to put the pressure on him, get him on his back foot, close the distance and just work him. I’ll hit him and punish him.

“I’m in the best athletic shape and ability that I’ve ever been in my career. I’m still hungry to be the world champion, so I’m going to go out there, put on a career-defining performance to show the world that I’m not going anywhere - I’m still in the Top 10, now I’m back in the Top 5 and I’m fighting for the title soon.”