Underrated Lamas Gets Chance to Shine against Swanson

"I’m really excited about this fight, and I believe that we can put on a Fight of the Night performance." - Ricardo Lamas 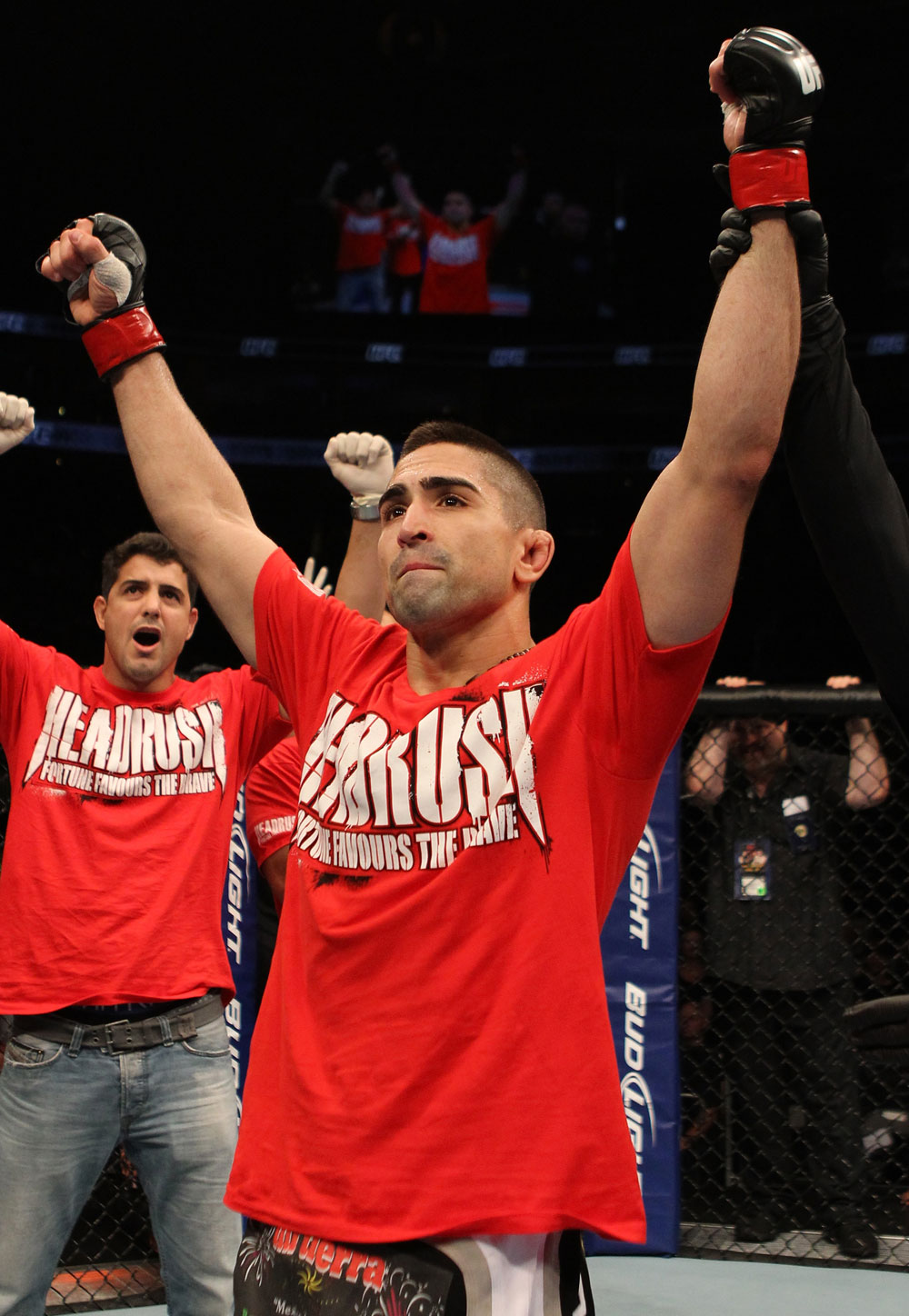 Ricardo Lamas doesn’t make a lot of noise. Maybe that’s why when discussion about the next generation of featherweight contenders hits the internet message boards, you don’t hear much talk of the Chicago native.

The ice is starting to thaw though, with the former WEC standout getting plenty of positive notices for his UFC and 145-pound debut in June, when he blasted out tough Matt Grice in less than a round. But it’s this Saturday that will tell the tale, as he meets up with longtime contender Cub Swanson on the UFC on FOX card in Anaheim. With a win, he propels himself into that ever-intriguing featherweight contenders’ mix, and with a big win, he won’t be the guy under the radar anymore.

“I’m just gonna sit back, keep doing what I’m doing, and keep working hard,” said the soft-spoken 29-year old. “I think that eventually, all my hard work and everything will pay off, and I will begin to get noticed. It’s just taken some time. When I came out on the scene, especially onto the Zuffa scene, I only had six professional fights. I was very young in my career, and I was kinda thrown in with the lions and had to learn how to sink or swim. It’s been a long road, I’m improving and I keep improving every fight, so I think eventually it will pay off.”

In that sixth fight, Lamas made the kind of debut on the big stage that most fighters can only dream about, as he decisioned veteran Bart Palaszewski in a WEC show on March 1, 2009. Suddenly, the former Elmhurst College wrestler was a player in the second biggest MMA organization in the world behind the UFC, and the fighters that he was watching on television just a few months earlier were now his peers and opponents. So how was it getting, as he put it, thrown in with the lions?

“It’s interesting,” said Lamas. “With Bart, he’s been around for a long time and when I was first starting my career as an amateur and then as a pro, I remember watching him in the IFL and kinda looking up to those guys in a certain way because that’s where I wanted to be and that’s where I wanted to get to. Even in this fight that I have now against Cub Swanson, I remember watching him before I got in the WEC, and he’s a really exciting fighter and I enjoy watching him fight. So I’m still kinda getting used to that awe factor when I go out to my fights and I see all these big name guys and I have to remind myself that I’m on the same level with them. It’s still something I’m getting used to.”

Unfortunately, time to get accustomed to new surroundings and a new level of opponent isn’t a luxury afforded to newcomers, and Lamas saw his final five WEC fights filled with three solid wins over James Krause, Bendy Casimir, and Dave Jansen, but also bookended by knockout losses to Danny Castillo and Yuri Alcantara. That’s learning on the job in its most primal form.

“There’s definitely that experience factor,” he admits. “They know what to do, they don’t panic when they get in bad situations and they know how to handle themselves in the fight. Stuff like that is definitely something that I’ve noticed.”

Lamas also noticed that he was giving away any size advantage to his foes in the lightweight division, and it was something that struck him as early as the Palaszewski fight. But when the WEC merged with the UFC in late 2010 and there was a logjam at 155 in terms of getting everybody fights, Lamas figured that it was as good a time as any to make the plunge into the featherweight division.

“In the transition from WEC to UFC, I had such a long layoff because of that logjam you were talking about, so I figured it was probably the best time to take my time and get my weight down the right way and finally make that drop to ’45.”

And given his wrestling background, the cut was smoother for Lamas than it is for most.

“I think it (his wrestling background) definitely helps out because I’ve had to deal with that for so long. With wrestling, you really have to learn how to manage your weight to a point where you can be really comfortable because you have to weigh in pretty much every single week. You really learn your body and what you need to do to keep your body weight down and still be able to perform at a high level.”

He delivered on all his promise against Grice, breaking open what was expected to be a Fight of the Night candidate with the thudding power that finished his opponent off at 4:41 of the opening stanza. Lamas isn’t bold enough to suggest a similar outcome against Swanson; instead, he thinks he may be in for that war everyone was expecting when he fought Grice.

“You can’t take him lightly at all and you definitely have to come prepared,” said Lamas of Swanson. “He likes to give the crowd what they want to see, he pulls off some crazy techniques and flashy techniques, and he’s just a really exciting fighter to watch. I’m really excited about this fight, and I believe that we can put on a Fight of the Night performance.”

If they do, then maybe Ricardo Lamas will be on his way to becoming a household name.

“2011 was the biggest year in MMA for me, and 2012 I think is gonna be even better,” he said. “I’m training even harder, and I get better every day, so I think the fans can expect to see a more well-rounded fighter, and hopefully more people can notice me in 2012 and get to know me as a fighter.”