“Once I put one on that chin he’s going to realize how hard I hit." - Eddie Wineland 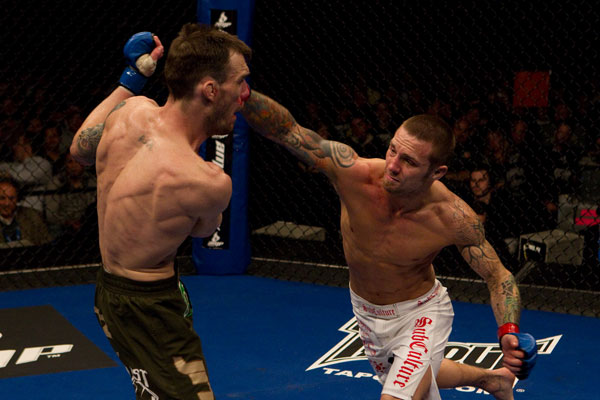 Former world champ Eddie Wineland is one tough dude. And his backside is a testament to that fact.

We’ll simply have to take his word for it.

Days before his UFC 128 bout against Urijah Faber, in the evening’s co-main event, Wineland’s cool aura gave every indication that the 5 to 1 underdog feels primed to pull off a huge upset at Prudential Center in Newark, New Jersey. Though he is fond of “The California Kid,” and harbors no animosity toward the former world featherweight titleholder, Wineland predicted that a prominent physical feature on Faber’s face will contribute to his downfall.

“He’s got an awfully big target on his head with that chin, I think it will be hard to miss that,” said Wineland, 18-6-1, who, like Faber, will be making his UFC debut. “Once I put one on that chin he’s going to realize how hard I hit. I’m going to stun him and I think I’m going to put him away.”

Armed with a beaming smile and surfer boy charisma, Faber has unquestionably mesmerized and captivated far more fans than Wineland. Yet while Wineland cannot match Faber in popularity, he holds up well in terms of pedigree. Like Faber, he has visited the pinnacle of his profession before, winning a WEC bantamweight title in 2006. He was only 21 years old. The victory helped Wineland cement his name in the history books: He holds the distinction of being the sport’s first 135-pound world champ.

“That’s mine. No one can ever take that away from me,” he said.

The achievement is especially impressive when one considers how lackluster Wineland’s career began. He turned pro at the relatively tender age of 18. Through the opening four fights of his career, Wineland sported an underwhelming 1-2-1 record. After eight fights, he wasn’t much better, owner of a 3-4-1 mark.

“It played with my head a little bit,” Wineland said. “I remember sitting down after one fight and saying, ‘My hands are better than anything else. Maybe I should just take up boxing.’”

A friend talked him out of it, and Wineland’s renewed focus and dedication to training spurred a dramatic reversal of fortunes; the super-quick boxer/wrestler has won 14 of his past 16 fights and hasn’t lost in two years. In his mind, Wineland sees similarities between his feelings headed into Saturday night’s fight and a key fight that he was involved in back on May 5, 2006.

“When I fought Antonio Banuelos for the WEC belt I had the same feeling,” the Indiana native said. “I fought that guy on Cinco de Mayo, 20 miles from his hometown, and the guy is Mexican. If that isn’t having the odds stacked against you, I don’t know what is. I went in there and kicked him in the face and knocked him out. So I have a pretty good reputation as a spoiler.”

Wineland conceded that when he won the WEC title he had little appreciation for how significant the feat would prove to be.

“I didn’t have any grasp of what the WEC was or what it meant,” he said. “Later I started researching the WEC and thought, ‘Wow, I guess this is a really big deal.”

He keeps that five-year-old WEC belt by a staircase in his living room.

“It’s got WEC written in rhinestones,” he said. “Some of the rhinestones are falling off but that gives it character.”

It is worth noting that Wineland’s reign atop the bantamweight division was short-lived and ended after 10 months. In March 2007 he lost to Chase Beebe, a four-time state champion wrestler who repeatedly took him down and controlled him en route to a unanimous decision. Exceptional grapplers have been the kryptonite to Wineland’s crisp, precision boxing and knockout power, which is a key reason why so many pundits envision Faber (24-4) as a slam dunk to beat Wineland and graduate to a title shot against UFC kingpin Dominick Cruz.

Not so fast, says Wineland.

“What people don’t realize is that I’m a wrestler by nature,” he said. “I’ve wrestled on and off ever since I could walk. But once I started fighting I took more of a liking to the standup side of it. I seemed to pick that up quick and my wrestling helped me keep it on the feet. I’m not the best wrestler but I have confidence in my wrestling and I’m not afraid to wrestle against anybody.”

The last man to take down Wineland in a live fight was Rani Yahya, in 2009. Yahya, a world-class submission wizard, tapped out Wineland 67 seconds into their matchup.

“But when I fought Rani Yahya we didn’t train much wrestling at all,” Wineland noted. “We did absolutely no wrestling. I was training with Miguel Torres at the time and it wasn’t really a wrestling-oriented gym.”

“After that fight I took a step back, started wrestling at the old gym (New Breed in Chicago) I was from and got back to my roots. I got that attitude back of “nobody’s going to take me down, I’m going to beat you at every aspect of this game and win the fight.’

Wineland has won four straight since then and is coming off a highlight reel knockout over American Top Team’s Ken Stone, a devastating slam that was delivered in a fashion reminiscent of Quinton “Rampage” Jackson. Now he finds himself in a position to become the division’s No. 1 contender.

“The WEC belt will always have a special place in my heart but it will be even sweeter to mount a UFC belt right next to it,” Wineland said. “The UFC belt is the best of the best and I’m striving to be number one. If I have anything to say about it I’ll have that belt, hopefully very shortly.”

Wineland counts his younger brother, Cory, as one of his inspirations. Cory suffered severe life-threatening burns during a childhood accident, but defied the odds and survived. Now a full-time firefighter, Wineland has thankfully never had to jump into a burning building and save someone’s life. Most of his time is spent responding to 9-1-1 calls for chest pains, drug overdoses and other medical emergencies.

I asked if he has ever had to rescue a cat from a tree.

“It’s funny you say that because we did that about two weeks ago,” Wineland said. “Honest to God. It was the typical, ‘My cat is stuck in a tree. He’s been up there for eight hours, can you come help him?’”