Underdog Frankie Saenz Amped Up for Big Test in Brazil 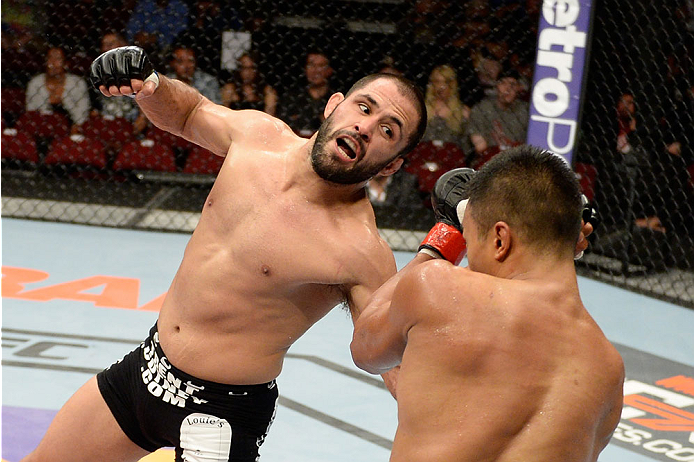 If Frankie Saenz is being honest with himself, he can approach his Sunday bout with number eight-ranked bantamweight Iuri Alcantara from a couple different angles. Namely, either the UFC sees a bright future for him at 135 pounds and wants to see how he fares with the battle-tested Alcantara, or UFC matchmaker Sean Shelby just doesn’t like him.

Saenz laughs the joke off and is more than willing to play along.

“I don’t know,” he said. “You could play it both ways. But I think it’s a good opportunity. I told them I wanted a top ten guy, so they helped me out with that.”

They certainly did, but despite the odds against the 34-year-old Phoenix native, he has no doubt that when the dust settles in Porto Alegre, he’ll have something to smile about.

“I feel like I’m up for this to prove myself,” he said. “I think I’m one of the best in the world, and what better opportunity to prove it than this? That’s what I love about MMA. It’s like ‘all right, you think you’re the best? Let’s prove it.’ I’m not trying to be cocky or anything like that, I just wanted a chance to prove myself and we’ll find out on the 22nd if I’m that good or not.”

Alcantara, who is on a three-fight winning streak at the moment, with only one loss (to Urijah Faber) since moving to 135 pounds in 2013, is no doubt a tough challenge for Saenz, but at this point, with five straight wins of his own to bring into the Octagon this weekend, he’s showing the best form of his career.

“I’m on a pretty good win streak,” Saenz, who defeated Nolan Ticman in his Octagon debut last August, said. “I won five in a row, and granted, the level of competition isn’t as big as Alcantara, but with each win you grow a little bit more confident. And with the training camp and training partners that I have, I feel like I’m to that point where, you know what, it’s just my time.”

Training out of the Fight Ready Gym in Scottsdale, Saenz is part of a team that is starting to make a lot of noise in the MMA-rich state of Arizona, with respected head coach Roland Silaraup leading a squad that includes Saenz’ fellow UFC roster members Henry Cejudo and Roman Salazar. Could this be the next great team coming out of AZ?

“I think so,” Saenz said. “We’re blowing up, we’re getting a lot of new guys, and we’ve got some tough guys nobody’s even heard about yet. We’re getting good grapplers, high-level wrestlers, some good strikers, and we’ve got a wide variety of right-handers and left-handers. And our coach is unbelievable. Roland Silaraup used to train at AKA with Frank Shamrock and “Crazy” Bob Cook and those guys back then, and he just brings an element to the game where we’re evolving every day.”

“I love it, because we get after it,” he said. “Everybody has a goal and everyone comes in knowing that we’re going to be grinding it, so if you leave it at home, you’re going to get your ass kicked all day, and that’s no fun for anybody. But it’s a beautiful thing. We beat each other up every day, but we all love each other and it’s a great team. Everybody’s just getting better.”

Saenz, a former college wrestler at Arizona State and the Univeristy of Northern Colorado, is also the wrestling coach at the gym, so for him, there are no days off, just that continuous drive to be, pardon the pun, fight ready, whenever the phone rings.

“I’m grinding every day,” he said. “I don’t really take any time off and I work at the gym, so I’m here full-time, trying to evolve my game, and I’m just ready to take that next step.”

That next step is Sunday. Brazil is a long way from Arizona, but this is how he always pictured things going – being in a big UFC fight with all the lights shining on him and his opponent.

“I always had that in my head when I started fighting,” Saenz said. “I want to be the best, so it’s pushed me every step along the way. I always wanted to be in the UFC, and not just get here, but be a world champion in the UFC. So I always envisioned myself being at this point.”

“I’m a competitor,” he said. “Once I’m in there, everything just goes out the window. I’m a nice guy, but if you get me in the cage or on a wrestling mat, I can turn it on real quick. I love the competition and I feed off the crowd, and if they’re booing me, I’m gonna love it that much more.”