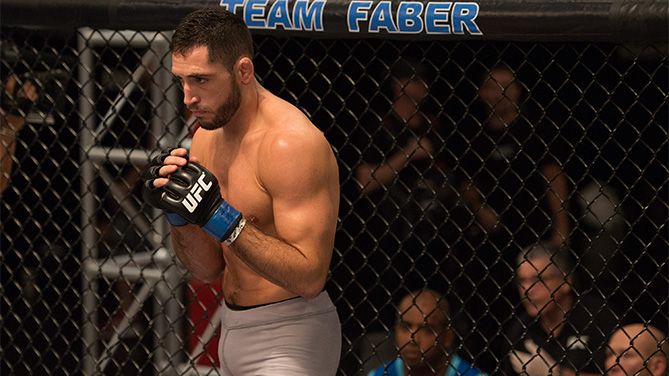 Thibault Gouti had his 29th birthday all planned out, even if the rest of the world wasn’t aware of such plans. But when Lukasz Sajewski was forced to withdraw from his bout against Teemu Packalen, the unbeaten Frenchman got the call he expected, freeing up Feb. 27 for him to make his UFC debut.

“I was waiting for this call and I wasn’t surprised,” Gouti said. “Deep in my mind, I knew that I will fight in this UFC for my birthday.”

You could call him Thibault Nostradamus after that spot-on prediction, but his call-up to the big show on short notice, given a few factors. First, he’s unbeaten in 11 pro fights, proving him to be ready for a shot. Second, living in Avignon, France, he’s close enough to get to London’s O2 Arena with no visa issues. Finally, the promotion was familiar with him due to his appearance on season 22 of The Ultimate Fighter. And while he lost his fight to get into the TUF house to David Teymur, Gouti wasn’t looking to have a long wait to get a second shot.

“After the Ultimate Fighter, I felt that I didn’t fight like I used to, but I was still determined to get into the UFC.”

So what to do? For most, a loss on TUF leads to a return to the local circuit and a handful of wins before getting back on the UFC’s radar. Gouti only needed one victory, but it was a major one, as he knocked out Octagon vet Anton Kuivanen in the third round. That’s what we call a statement maker.

“My win against Anton was revenge from TUF,” he said. “I wanted show to everybody that I deserve to be in the UFC by beating a UFC veteran.”

And now he’s here against Finland’s Packalen and it should be a good one, if past history holds true in London. Combined, the lightweight prospects have 18 wins and 1 loss, with all 18 wins coming by knockout or submission. These two are finishers, and Gouti will be seeking another early night on Saturday.

“It’s in my spirit,” he said. “If I don’t finish a fight, I feel frustrated. I really don’t like to let other people decide my victory.”

So far, nobody has, and even though the stakes are a lot higher in the UFC, it doesn’t matter to him. He’s going to fight the way he always has.

“I will definitely go for the finish. I don’t care about the risk, but I do all of these things with intelligence.”

If he lives up to his words, he will be the latest French prospect to make a mark in the Octagon, and that’s a list that’s growing longer and longer thanks to the efforts of the likes of Taylor Lapilus, Francis Ngannou, Mickael Lebout and Mehdi Baghdad.

“I think the French fighters are coming stronger than ever,” Gouti said, eager to give the French MMA scene another boost on his birthday. “I’ll do everything I can to knock him (Packalen) out, and beyond that I wanna fight the best fighters in the UFC lightweight division.”