Undefeated: A Look Back At DC's Heavyweight Run

On the eve of his championship rematch with Miocic this weekend in the main event of UFC 241, let’s look back at the biggest heavyweight highlights in the career of the reigning, defending, undisputed UFC heavyweight champion.
By E. Spencer Kyte • Aug. 16, 2019

Whenever he finally decides to hang up his four-ounce gloves, Daniel Cormier could do so as one of the greatest heavyweights in mixed martial arts history.

And though Cormier’s feud with Jon Jones is always going to be on the mind of fans reflecting on his time in the Octagon, as their never-ending rivalry has become the defining moment in each of their historic careers, the reality is that when “DC” became the second fighter in UFC history to win titles in two weight classes simultaneously by knocking out Stipe Miocic in the main event of UFC 226 last summer, it’s his time among the big boys that is firmly in the spotlight now.

And rightfully so, as Cormier has accomplished a great deal at heavyweight.

So while his most high profile moments have come while competing in the 205-pound weight class, people tend to forget that Cormier is undefeated as a heavyweight.

With his second-round submission victory over Derrick Lewis last fall, Cormier pushed his record to 15-0 in the big boy division, which includes 10 victories by way of stoppage and four straight wins when competing in the Octagon as a heavyweight.

Now, on the eve of his championship rematch with Miocic this weekend in the main event of UFC 241 at Honda Center in Anaheim, California, let’s look back at the biggest heavyweight highlights in the career of the reigning, defending, undisputed UFC heavyweight champion.

Cormier entered the contest with seven consecutive victories to start his career and while he’d beaten a few solid opponents, Monson was viewed as a considerable step up in competition for the two-time Olympian.

While Cormier was less than two years into his transition to mixed martial arts, Monson entered with a 41-11 record and brandishing an eight-fight winning streak. The former UFC heavyweight title challenger was a formidable grappler and submission specialist with considerably more experience than Cormier and how the unbeaten upstart handled the pairing would go a long way towards determining where his ceiling could potentially rest.

Over the course of three rounds, Cormier pitched a shutout, outworking Monson on the feet and showing that his skills in the standup game were progressing nicely. On a night where all eyes were on the Strikeforce heavyweight ranks, “DC” showed he was going to be a key piece of the division’s future. 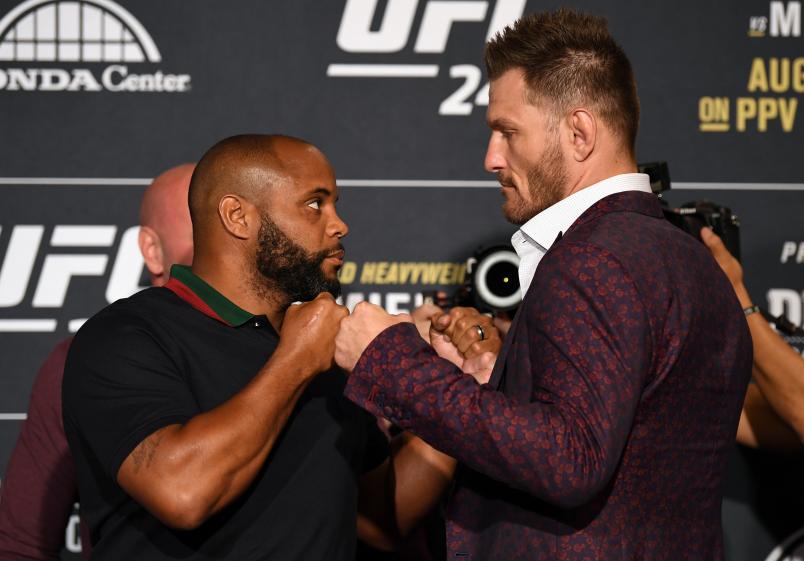 While the last several years haven’t been kind to the hulking Brazilian, Silva entered the bout at the absolute apex of his career, sporting a 16-2 record and fresh off a first-round mugging of Russian icon Fedor Emelianenko seven months earlier. He’d won nine of his previous 10 bouts and was expected to be a serious test for the talented, but still somewhat untested emerging prospect.

Cormier knocked him out in just under four minutes.

The improved striking he showed against Monson looked even more advanced and the considerable speed advantage he carries at heavyweight was even more pronounced as Cormier cut angles, worked inside and wiped out Silva, earning himself a trip to the finals.

May 19, 2012
Defeats Josh Barnett at Strikeforce: Barnett vs. Cormier

Whenever people undertake the exercise of listing the best heavyweights in MMA history, it’s surprising how long it takes some folks to get around to mentioning Barnett, who has a 35-8 record and has fought an absolutely insane collection of competitors over his 20-plus year career.

The fact that Cormier dominated him less than three full years into his transition to mixed martial arts, including scooping him in the air and slamming him to the ground as he would do to Dan Henderson five fights later at UFC 174, remains incredible and a testament to just how good Cormier is as an athlete, as a fighter, and as a heavyweight.

This wasn’t a case of a young pup beating up an old dog — Barnett is 20-months older than Cormier — nor was it one of those “veteran name on the decline gets served up to rising star” jobs either, as “The Warmaster” entered on an eight-fight winning streak and would win his next two fights after this meeting as well.

This was simply Cormier showing that his days as a prospect were over and he was ready to be a contender in the heavyweight ranks.

Winning the UFC heavyweight title changed everything for Cormier, even if his staunchest critics and detractors still never want to give the man credit.

Sure, his two fights with Jones remain sore spots for him, but beating Miocic procured him a UFC title that didn’t carry an asterisk and to secure it by beating the guy who had six months earlier, on the same night as Cormier defeated Volkan Oezdemir, beaten the seemingly unstoppable Francis Ngannou in lopsided fashion to establish a new record for the most consecutive successful title defenses in the UFC heavyweight division made it even sweeter.

Going into the fight, it was like Cormier’s history with Jones hung over his career like a fog, preventing some people from recognizing his past heavyweight accomplishments and that his abundant skill sets plays much better when he’s not punishing himself to make the 205-pound limit. But all of that quickly became evident when he rolled with Miocic’s punches out of the gate and started sniping lefts and rights down the middle that busted up the defending champion.

Then, as they exited the clinch late in the opening round, Cormier landed the short right hand he’d worked on with his coach, Rosendo Sanchez, countless times, felling the champion to claim the UFC heavyweight title.

It’s clear this one means a lot to Cormier, even if the exceedingly affable champion has kept his comments about the significance of this fight and what a victory will mean to him limited.

“I just don’t like that he still hasn’t fought again and I’ve fought,” said Cormier. “Go beat somebody.”

While Miocic’s case for an immediate rematch was clear, there was also a legitimate argument to be made for a rematch being unnecessary, given how things played out the first time around. But the former champion’s readiness to hold out in hopes of securing a second consecutive bout with Cormier irritated the Louisiana native and fuels him heading into their rematch on Saturday.

“For him to be sitting on the sidelines for a year just rubbed me the wrong way,” Cormier said. “I don’t like people acting entitled. There was no reason for that; he could have beaten someone else and then maybe people would be more interested in him and I fighting again because their last memory is him sleeping on the floor of the Octagon and me standing over him.

“August 17,” Cormier continued, “I beat Stipe Miocic again and this time, I not only beat him in the fight, but I ruin him. This one is really going to stick with him for the rest of his career.”

If that is indeed how things play out this weekend and Cormier moves to 16-0 at heavyweight, with twin victories over Miocic and two successful title defenses in less than a year, his place in the pantheon of all-time greats — both at heavyweight and the sport as a whole — will be assured.

Not bad for a guy who admittedly couldn’t throw a punch when he first started training and is still a month away from the 10-year anniversary of his MMA debut.