Undefeated Calvillo taking nothing for granted

Cynthia Calvillo (R) wrestles with Amanda Cooper during UFC 209 on March 4, 2017 in Las Vegas, NV. (Photo by Steve Marcus/Getty Images)" align="center" /> The last time we checked in with Cynthia Calvillo, just before her July bout against Joanne Calderwood, the strawweight contender admitted that following six fights in 11 months, her Team Alpha Male squad wasn’t going to let her in the gym for a month once the Calderwood bout was done.

“It kind of worked itself out because I traveled a little bit after Scotland,” laughed Calvillo, who improved to 6-0 with a decision victory over Calderwood in Glasgow. “I went from Anaheim to Mexico City and I stayed out of the gym, but I worked out still.”

That’s not surprising, considering that Calvillo has been the female version of Donald “Cowboy” Cerrone since she turned pro in August 2016, fighting anyone, anywhere at any time. But if you ask her about it, she shrugs it off, not seeing her attitude as different from any of her peers. 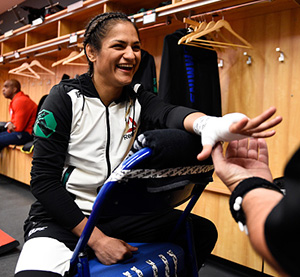 “It’s a lifestyle for me,” she said. “The only thing that’s changed is that I’m fighting for the UFC now. But I’ve been training and fighting for seven years now, so, to me, this is going back to work. I don’t know what else to do. I had a little bit of a break as far as preparing for a fight, but I’ve still been in the gym working and improving and bettering myself as a fighter.”

This Saturday, Calvillo hits Las Vegas for a UFC 219 main card bout against former 115-pound world champion Carla Esparza. It’s a little over five months since her last bout, marking the longest break of her career, as bizarre as that sounds. Yet it was probably a good thing for the rising star, who finally got a chance to exhale and look back at what she’s done so far. And while she’s proud of the 3-0 start to her UFC career, she refuses to be complacent.

“Honestly, I have tunnel vision,” she said. “Being recognized here and there, it’s really cool, but I haven’t changed much. I’ve kept the same friends, the same people around me, the same schedule. I haven’t done anything different, really. I’m focused and I have a lot of goals to accomplish. I want to keep lining up these fights and see how far I can take it.”

Well, there was one change.

“I bought a newer car, something more reliable where I feel a little bit more confident about traveling and driving places if I need to.”

Reliable? That’s what mature professionals do, and even though she’s young in her career, at 30, she’s learned enough lessons about life to know what it takes to succeed in the world. That’s an edge that can’t be stressed enough, because while younger fighters might be taking in their new star status or doing things 20-somethings usually do, Calvillo finds her peace in her work. 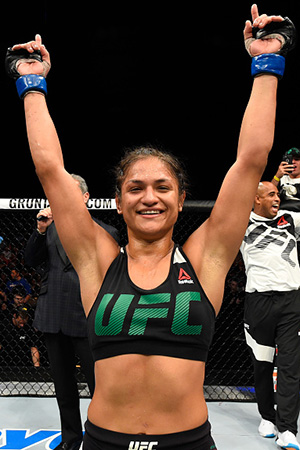 UFC Fight Night event on July 16, 2017 in Glasgow, Scotland. (Photo by Josh Hedges/Zuffa LLC)" align="right" /> “I used to be married – I had a husband and we had a house and a car and all this stuff - and it wasn’t successful,” she said. “You learn a lot about what’s important and what’s not and what you really want to accomplish in life. I already did my partying when I was in my 20s and I’m not really entertained by any of that. None of that impresses me or makes me happy. I truly just want to be a good person, I want to be a world champion and just go above and beyond anything I could have ever imagined when I was 20. I would have never thought I could be something like this, so I can’t take it for granted.”

If she needs any reminders, she can go back to the beginning of the year, when she was still working a day job at the Cheesecake Factory while juggling a fighting career. Those days are over, but when things get tough around weight cutting time, she can always remember how she got through while having to be around food several hours a day.

We go on to discuss that menu, particularly the dessert section, and Calvillo reels off the names of the various cheesecakes, an impressive feat, especially with her fight on the horizon.

“All of a sudden I can name all of them off the top of my head.”

The subject gets changed, because it’s not cool to talk cheesecake with a fighter about to cut weight. But it doesn’t bother Calvillo. She’s too mentally strong to be rattled by such matters. She’s got a fight on her mind, and after that, a look at her history makes it no surprise that this is a young lady in a hurry.

“My goal from the time I started fighting was to be world champion, but I also know that there are certain goals you have to accomplish first before you get there,” she said. “So I try to focus on what’s in front of me. But I’m hoping next year I get that title shot. I know Rose (Namajunas) being the new champion mixes it up, but I think after I beat Carla, I can fight another person in a title eliminator and get a fight for the title.”