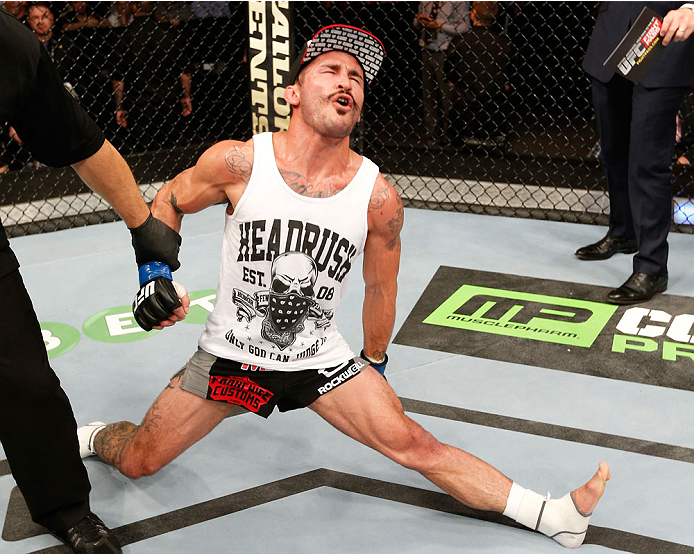 After sitting on the sidelines since January of 2015 and losing two summer bouts through no fault of his own, it would be understandable if Ian McCall didn’t have the same feeling about prizefighting that he did when he started.

But when asked if the line on his UFC bio that said he began on this journey “Because fighting is cool,” is still accurate, he laughs, then answers immediately.

“Yeah, it’s gotten cooler, but it’s cool in a different way,” McCall said. “It’s a lot more cool because we have the respect and the admiration of kids and parents and whole communities. People look up to you, and it’s a better look now.”

Is this Ian McCall, the longtime wild man of the Southern California fight scene? Has “Uncle Creepy” gone and matured on us?

“Yeah, sadly I have,” he said. “I had a good run in the other form, but there was no money in that form. That well dried up. It had to change. It’s better for the sport and it gives it more legitimacy.”

Forget the sport. It’s better for McCall and his family, especially his five-year-old daughter London, who is the primary reason why the 32-year-old is approaching life a lot differently than he did when he was first making his name in the sport. Back then, there was no daughter to raise and a career to cultivate. He was living a reckless existence and he knew it. Looking back now, he can appreciate some of those good times. But the past is just that – the past.

“I’m getting older, and as you get older, you always romanticize about the past and the good ol’ days,” he said. “And it was a lot of fun back then. It was a really good time, and I had a front row seat for the greatest part of it. I was the kid brother to the guys like Chuck (Liddell) and I had so much fun as a young man who wasn’t even 21 years old.”

Now he’s a father. And a damn good one in his eyes.

“I still get to act like a child and be silly and have fun, but I’ve realized that it takes too much energy to be an immature punk and act like an asshole, and I have to be a good example for my kid,” McCall said. “I see kids who are bad and annoying, but it’s not their fault. Ninety nine percent of the time, it’s bad parenting, and I take pride in the fact that the one thing I’m good at on this planet is being a dad. I’m always trying to teach my kid life lessons and do all this positive stuff, and I have to. I don’t have a choice. I have to make sure this little person doesn’t grow into someone I don’t like. I would like to spend the rest of my days with this little version of me and have her be someone I enjoy being around. So I had to reevaluate a lot of things.”

In theory, the change that has taken place over the last few years should make this version of Ian McCall the most dangerous version we’ve seen yet. But that’s the rub – we haven’t had the chance to see it since his January 2015 loss to John Lineker. Injuries were the first culprit, but then a July bout with Justin Scoggins was scrapped when Scoggins wasn’t going to make weight, and in September, Ray Borg was pulled from their bout days before fight night.

“It’s frustrating to a point, but I just kind of laugh it off,” he said. “With everything that’s happened, I just laugh. I’ve got a job to do, I’ve got to train, I’m getting another chance at making my career what it should be, and that’s cool. That makes me happy. I never thought this was gonna happen again, so I’m just grateful to be here.”

This Saturday, “here” is Belfast, where McCall hopes to play spoiler for the final fight of Neil Seery’s career. If he succeeds, it will be his first victory since July of 2014 and the beginning of his road back to the top of the flyweight division. He’s still ranked fifth in the world at 125 pounds, and he gave champion Demetrious Johnson two of his toughest fights. And yes, despite his status as a fan favorite who his followers would line up to see battle anybody, McCall’s goal is still the gold held by “Mighty Mouse.”

“I need a title,” he said. “I know people are starting to stray away from that and get into these Superfights, but my Superfight is with Demetrious. If Demetrious wants a seven figure payday, then let me run through a few people and then we’ll get that payday. I’ll be Conor McGregor to your Jose Aldo or Chael Sonnen to your Anderson Silva. I’ll make us money. Let me handle it.”