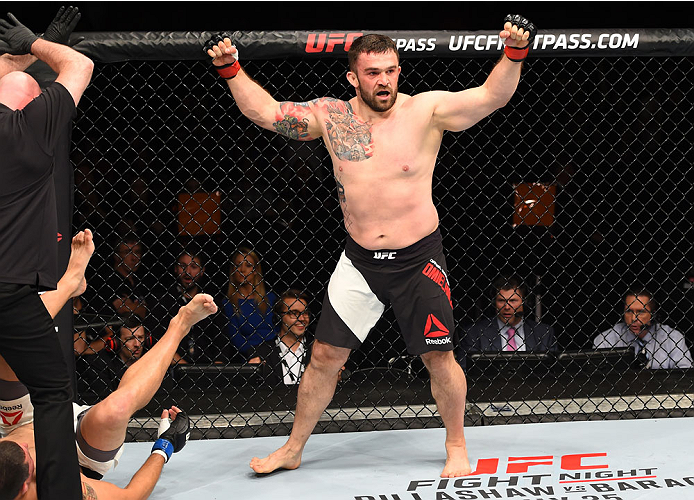 For fighters around the world, movies have often been the catalyst to move from the couch to the dojo or gym and begin a journey that leads them to the world of professional combat sports.

“Bloodsport,” “Rocky” and anything starring Bruce Lee are the usual classics that get someone’s blood flowing for combat. But 1985’s “American Ninja”? That’s the one that set the stage for Poland’s Daniel Omielanczuk to become a fighter.

“It was the first movie about combat sports that I watched as a child,” he said. “It was something new and fresh for me. That was the moment when I decided what I want to do in my life and I stared to fulfill it.”

Today, the 33-year-old is a member of the UFC’s heavyweight roster and looking forward to a Saturday bout with Octagon newcomer Jarjis Danho. It’s an interesting matchup, but Omielanczuk, who is entering his fifth UFC fight, doesn’t know if the “Man Mountain” is ready for life in the big show.

“He is not expecting this fight to be the toughest ever,” Omielanczuk said, and it’s not boasting, but the reality of being under the bright lights for the first time. And while Germany’s Danho has scored knockouts in all six of his pro MMA wins, whether he can crack the chin of his opponent is the big question.

For previous answers, consider that in 24 pro fights, Omielanczuk has never been finished. Other fighters with some losses can make the same claim, but rarely in the heavyweight division, where 250-pound men with four-ounce gloves usually suffer at least one defeat via finish. Everyone in the UFC’s heavyweight top 10, plus champion Fabricio Werdum, have all been on the wrong end of a knockout, but not Omielanczuk, who understandably takes pride in his durability.

“My upbringing was crucial to this,” he said. “I was very active during my childhood and I currently train my durability while sparring.”

That kind of toughness could make Omielanczuk the most dangerous fighter in the division, since he is a threat to land a finishing blow up until the final horn.

He agrees, saying, “I'm always very motivated and I never give up until the fight is over.”

He showed off that late finishing power in his UFC debut in 2013 when he knocked out Nandor Guelmino in the third round, but in his most recent bout last July, he needed less than a minute to end the night of another Octagon newcomer in Chris De La Rocha.

“It was a great feeling,” he said. “It’s very positive when you win the fight in a good style.”

The win broke a two-fight losing streak for the Warsaw product, and now he’s in with Danho, who, despite his UFC inexperience, is being looked at very seriously by Omielanczuk.

“I treat him as every other competitor; I don't ignore him,” he said. “He is very aggressive in the cage and goes forward all the time.”

It’s the recipe for an exciting fight, and an important one for Omielanczuk, who can win two in a row in the UFC for the first time and begin his own trip to the top 10.

“If I win two more fights, I think so,” he said of earning a ranking among the big boys. “In the heavyweight division, one accurate punch can determine the victory and every competitor can defeat another one.”

All Omielanczuk needs is a chance.