Umar Nurmagomedov Is Ready To Climb To The Top

Umar Nurmagomedov may not have realized it at the time, but his UFC debut nearly two years ago was accompanied by a significant amount of hype.

“I really don't know what hype are you talking about,” said Nurmagomedov. “I somehow didn't notice it. Plus, there are people near me who definitely had more hype. So most likely, using their example, I got through all this without noticing.”

The people near him, most notably his cousin Khabib and current lightweight champion Islam Makhachev, comprise one of the most feared collectives of fighters in the sport, but as Nurmagomedov smoothly locked up a rear naked choke that put an end to Sergey Morozov’s night in Abu Dhabi on January 20, 2021, it was clear that he was deserving of that hype. And two years later, nothing has changed.

“Two years ago was my debut and they were the same as all the previous ones: work out, eat, sleep. Still the same dream, still the same goal – to become a champion.” 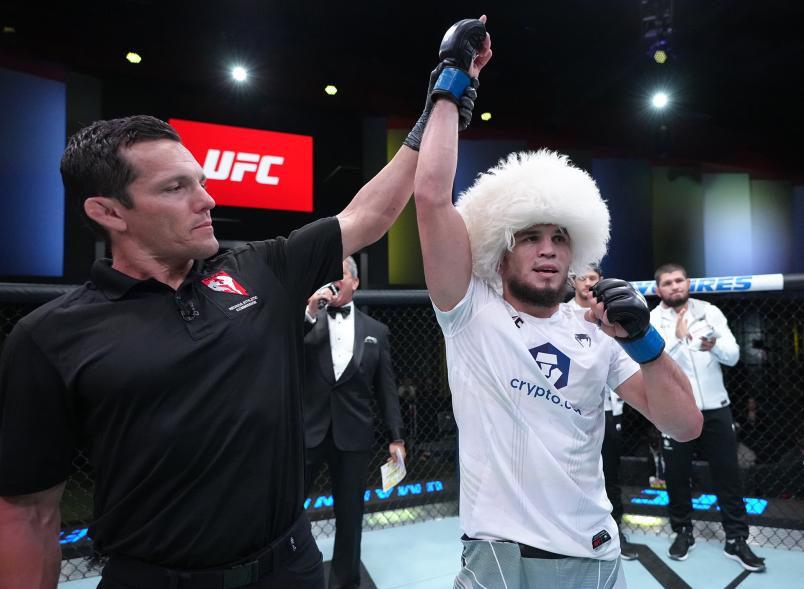 Umar Nurmagomedov of Russia reacts after his victory over Nate Maness in a bantamweight fight during the UFC Fight Night event at UFC APEX on June 25, 2022 in Las Vegas, Nevada. (Photo by Jeff Bottari/Zuffa LLC)

If his matter-of-fact attitude sounds familiar, it’s because it’s the formula that led Khabib and Makhachev to the top, and if it ain’t broke, don’t fix it. But as Nurmagomedov prepares for his first start of 2023 against Raoni Barcelos on Saturday, it’s important to point out that this isn’t something the 26-year-old picked up at a few training camps; it started a long time ago back in his native Dagestan, a place where he said “every kid trains.”

“I don't know how to explain it, but in my opinion, each person is created with some kind of fighting ability,” he said. “It all started for me with the desire to become the champion of Dagestan, then the champion of Russia, and the world champion. I don’t remember any other hobbies besides sport at a conscious age. My father never insisted on sport, and even dissuaded me; he was more pro-knowledge and education. But the passion for training and the desire to become a champion did not fade away, and I persuaded him to let me be in the sport.”

That persuasion included some give-and-take, so as Nurmagomedov used his brothers’ athletic pursuits as an example that he wanted to follow, dad insisted that his son get his education. They had a deal, and now, Nurmagomedov realized what good advice he was given.

“For me as a young boy, my older brothers have always been an example,” he said. “There was no internet back then and I was looking forward to news from their performances and their achievements. I saw how our relatives rejoiced at their success. Maybe this was the reason for the love of the sport for me.

“Regarding education, it was my father who insisted,” Nurmagomedov continues. “He said that I have to have a higher education. Only now I am thinking about and where I will find myself after the sport and what I would want and like to do after. Before, I had no such thoughts, it was all about sport.”

And Nurmagomedov was something special in his chosen paths. In university, he earned a Business Management degree, and in the world of combat sports, he became a world champion in amateur MMA and combat sambo.

“I have been in sports since childhood,” he said. “And there was no sudden realization that I could become a world champion. I just trained, acquired skills, until a dream was born, and so I set a goal for myself.”

The pursuit of that goal has led him to a perfect 15-0 pro record that includes three UFC victories over Morozov, Brian Kelleher and Nate Maness. Next up is his toughest test to date in Brazil’s Barcelos.

“Barcelos is a very strong opponent, a great test of strength for any fighter,” said Nurmagomedov. “I want to finish him early. But winning by decision will be good enough, too.”

It’s a mature approach for a young man who, if you haven’t guessed by now, is quite mature for his age. Where does that come from?

“I don't even know how to answer this question,” he said. “But I had good examples right next to me who I could talk to and can ask questions, and who will help and support.”

So no impatience to get to the top of the bantamweight division yesterday?

”I have nothing to complain about,” Nurmagomedov said. “Everything goes as it should and that’s fine by me.”

If he keeps winning, he should be in the title race sooner rather than later. And that’s the plan.

“I want to stay active and perform as much as possible,” he said of his ideal 2023 campaign. “I'm 27, and its time to start climbing to the top to get the belt.”