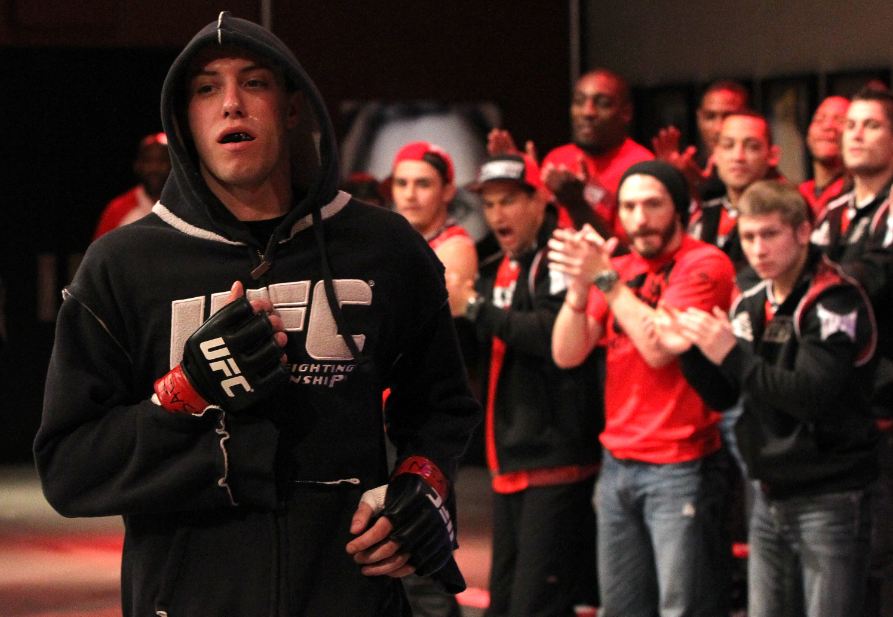 Seeing that there was a significant gap between UFC events, I graciously accepted the offer to do The Ultimate Fighter Live Recap. Expect some of the same things that you get from the Downes Side -- expert analysis, proper grammar, and maybe even a reference to the Lincoln-Douglas presidential debates.

After an intro to the new season and format (the show is now half-taped content from the last week of training/living in the house; but the fights at the end of the episodes air live each week) from Dana White we fly through some snapshots of the fighters. Michael Chiesa stands out to me due to his similarities to Cody McKenzie. Not only do they have similar looks, but apparently they both live out of their cars. Now he just needs a submission named after him -- Chies-a-tine or Chies-a-plata are my early favorites.

Cruz takes Justin Lawrence with the first pick (that’s the guy who poured it on and knocked out experienced vet James Krause inside of 90 seconds in the premiere) and Faber chooses Al Iaquinta (the toe ruiner). Cruz fills out his roster with (in order) Sam Sicilia (the 8-second knockout guy from the premiere), Myles Jury (a TUF 13 contestant who had to leave due to injury and a training partner of Cruz in San Diego), Mike Rio, James Vick, Vinc Pichel, Chris Tickle, and Jeremy Larsen. Faber’s crew grows with Cristiano Marcello (the Gracie black belt), Daron Cruickshank, Joe Proctor, Mike Chiesa, John Cofer, Andy Ogle (the British kid) and Chris Saunders (The One With the Mohowak).

The picks go largely without incident until Cruz opts for Chris Tickle because Tickle had been openly lobbying to be on Faber’s team. In a mind-eff of things to come, Cruz explains that he was purposely throwing a wrench into Faber’s plans – since everyone knew Tickle was Faber-focused, Faber didn’t have to use up one of his picks on him, because he knew Dominick wouldn’t take him. Or in his words, “I took him because Urijah would take him, and by me taking him, Faber couldn’t take him anymore because he was taken.” While I applaud him for showing all the verb tenses of take (despite lack of the pluperfect) it was a little confusing. we’ll see if “Bad Boy” Tickle ends up being a great pick up or if it’ll just be a really creepy piece of fan fiction.

After a couple of training clips, the guys gather in the gym for the fight announcement. As the teams are waiting, we get a little of the beloved trash talk between the two coaches. Faber confronts Cruz about comments he made in UFC magazine about Urijah’s parents helping him set up a gym. Faber warns Cruz against bringing his family up, and tells him to stop. Dominick apologizes and says he meant no offense. Faber accepts Cruz’ apology on behalf of his dad (really.)

Reasoned discussion followed by an apology and understanding -- are you listening, Jon and Rashad?! The church bake sale I went to last week had more tension than that. (In my defense, those cookies were over-baked and I deserved a refund.)

Team Faber decides to pit Michael Cruickshank against James Vick. The prevailing attitude is that boxer Vick is too one-dimensional for this fight and that Cruickshank, a seasoned kickboxer trained by his parents (“My mom can beat up your dad,” he smiles), will easily win. Even Cruz admits that his fighter is the underdog. Now, I have an unfair bias in favor of lanky lightweights, so right away I was hoping that Vick wouldn’t embarrass himself.

After some more training clips, the coaches call Michael Chiesa into the back. He takes a phone call from his mother, who informs him that his father has died of acute myeloid leukemia (AML). Chiesa later meets with Dana White and learns that he’ll be able to leave the house for the funeral and return if he wants. Chiesa immediately says he’ll return and compete. Chiesa is obviously devastated, and frankly, his raw emotion and the unflinching cameras make it devastating to watch.

After a level of gravitas previosly unseen on TUF, it’s fight time. Vick gets a pep talk backstage from Cruz, who implores him to go out and have fun. Vick’s only response is a nervous-sounding “Yes, sir.” Meanwhile in the Team Faber locker room, Cruickshank is relaxed and ready to get out there.

The first few minutes are uneventful. Crankshaft (isn't that easier to remember?!) throws some flashy Tae Kwon Do kicks that look cool, but like most of what you buy at Bed Bath & Beyond, don’t really accomplish much. Suddenly, 'Shaft dives in on a double leg and eats a hard right knee to the face. It puts him out cold and lanky underdog James Vick is on his way to the quarterfinals. All in all, things worked out well for Vick -- except for when Jon Anik totally left him hanging during the post fight interview.

The show closes with the fight selection for next week and a big psychological play by Dom. Cruz pulls a slick move by choosing first-pick Justin Lawrence for next week’s bout, then telling Faber to pick who from his team he wants to battle Lawrence. Faber sits in stunned silence, unsure who to send in, and asks his team if any of them are “ready to scrap.” No one on Team Faber makes a move. I hadn’t heard that much awkward silence since I told my parents I was ditching grad school to become a professional fighter.

Finally, Cruz picks Marcello and the match that many fans expected to see at the Finale is set for next week. Will Team Cruz’s number-one pick show his worth? Will Team Faber get their first win with their second choice? Will someone finally urinate on someone/something? Find out next week!

In the meantime, be sure to follow me on twitter @dannyboydownes, the show at @InsideTUF and leave comments. Now, if you’ll excuse me, I’m writing this on St. Patrick’s Day and I have a couple Irish stereotypes to fulfill.

Here’s the season at a glance: