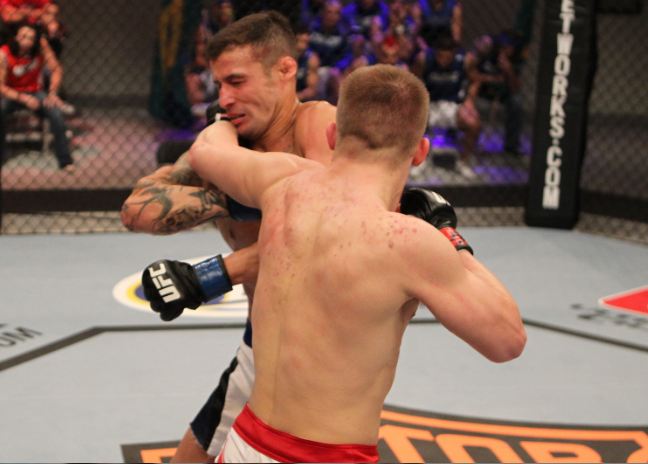 Well, episode one (which you can read here) went so well that I decided to give up my Friday night again to bring you the Ultimate Recap Live again. Sure my cross-stitching has to suffer, but life is all about sacrifices.

The episode opens up with a recap of last week’s events. While not as engaging as my recap, it hits the big points. There’s a big emphasis on how Dominick Cruz embarrassed Team Faber by letting them choose who they wanted to fight against number 1 pick Justin Lawrence, a request that was welcomed with awkward silence and eventually Cristiano Marcello. Based on the reactions of the fighters, the move clearly had an effect. We hear exaggerations, excuses and a couple head scratching comments from both sides.

Team Faber’s John Cofer blames Urijah Faber for not taking charge and making a decision. Apparently coaches are not only supposed to teach you how to fight but also give you a backbone. Is it really stepping up if you have someone do it for you? Isn’t that more like being carried? Cofer does have a point, though. Sometimes people in authority don’t want to fulfill their obligation to you. I still remember when my dad told me to be a “big boy” and said he wouldn’t help me go potty anymore. That was the worst eighth birthday in history...

Team Cruz’ Vinc Pichel says that Team Faber is “hating life right now.” Really? I’m pretty sure they’re glad they avoided a fight they didn’t think they could win. However, he could be referring to some deep philosophical void they’re experiencing by coming to grips with their own frailty.

Speaking of deep, introspective thinkers, next we’re given a view into the world of Chris Tickle. After calling out Team Faber in the kitchen, we see him running around in a gas mask. Instead of offering the benefits of oxygen deprivation training, the explanation we receive is, “smiles are addictive....it brings less negativity in the world.” This coming from the guy who was just trying to make Team Faber feel bad about themselves and essentially calling them cowards. Hey Tickle, you know what brings less negativity into the world? Less negativity.

Tickle then pulls a “prank” by taking the sign from Urijah Faber’s parking spot. Something tells me that if he’s been parking in the same spot for a couple weeks, he probably doesn’t need the sign.

Next, Lawrence works his standup by hitting mitts and talks about his route to fighting. He says he’s here to “shock the world.” Yeah, just like all the other #1 picks in history. Remember that LeBron James guy? Man did he shock the world when he got good at basketball.

We get another glimpse at “Bad Tickle” dragging his feet getting to practice, blaming his bowel movements, among other things. Coach Cruz is frustrated, but says, “I have to encourage him.” He confronts Tickle and tells him to get his head in the game. Tickle apologizes and tells his coach that he didn’t mean anything by it and then in the next frame tells the camera that it “pissed me off.” Oh Tickle, I’m so glad you came along so I don’t have to confront my mortality like last week.

Coming back from commercial we see Marcello training with assistant coach Justin Buchholz, who tells us, “don’t discount crazy.” Team Faber finds the sign and uses some tape to modify Cruz’ photo in the training room to make him look like the “Dracula/Eddie Munster hybrid” that Faber calls him.

As Team Faber leaves and Team Cruz arrives, Tickle confronts Cofer over an impression of him he caught Cofer doing. We get the usual BS tough-guy talk, but the real highlight is Tickle proclaiming, “I don’t put up with shit since I was eight years old.” Besides feeling bad for his mom, I tried to figure out what could have happened to set him off. He was eight in 1991, so my best guesses thus far are: 1) protest of First Gulf War 2) His mom wouldn’t buy him Sonic the Hedgehog for SEGA 3) He took the death of Finnish neuroscientist Ragnar Granit really hard.

More training clips from both guys, Team Cruz adds a chin thong to the butt-chin portion of Faber’s picture, and then we cut to weigh ins. Nothing of real note, then it’s fight time. Team Faber sits with a few Brazilian flags and then Marcello totally kills Team Cruz’ U-S-A chant by coming to the Octagon with an American flag.

From start to finish, Lawrence controls the fight. He throws a lot of power shots but doesn’t string combinations together. The first round passes without real significant strikes landed on either side. In the second round the two stand in front of one another more, which does not work well for Marcello. About halfway through the round he gets clipped with a big right hand. It doesn’t finish him, but he never recovers. Soon, Lawrence partially connects with a hook and that’s the last strike thrown, giving the #1 pick/apparent underdog the win 3:16 into the second and an extra $5,000. Read fight play-by-play

The selection this week goes without incident and ends up being Team Cruz’ Myles Jury vs Team Faber’s Al Iaquinta. Will the unbeaten Jury continue to have, “God on his side?” Will Iaquinta get a bonus so he can move out of his parents’ house? Will Chris Tickle finally come to grips with the death of Ragnar Granit? Find out next week!

In the meantime, be sure to follow me on twitter @dannyboydownes, the show @InsideTUF and leave some comments. And as always, if you can recommend any good stitch-a-longs coming up, I’d appreciate it.

Here’s the season at a glance: