Despite the deadly combo of cheap tequila and even cheaper tacos, I survived last weekend. It may have taken down a lesser man, but I, Danny Boy Downes, will let nothing stand in my way in my mission to deliver the #1 internet recap column written by a UFC veteran concerning an MMA-based reality show which airs on FX Friday evenings. It’s certainly no easy feat, but heavy lies the crown.

After recapping last week’s events, they preview the night’s quarterfinal matches with movie preview guy’s voice. I think the the UFC should utilize this effect a lot more. Imagine the possibilities:

We see James Vick’s training and all the Team Cruz coaches are very positive about his chances. Dominick says that he sees Vick making it all the way to the finals and the assistant coaches all nod their heads in agreement.

Dana White walks in and you know something is up because he’s using his serious voice. He wastes little time getting to the point and says that he’s here for, “The bad [expletive]” and you hear the sad piano music in the background. I don’t know about you, but I was thinking Sarah McLachlan was going to walk out and ask us to donate money to something. Sadly, I was mistaken and Dana then informs both teams that Dominick Cruz has torn his ACL and while he’ll stay around to coach the remainder of the season, he will not be fighting Urijah Faber. Everyone is obviously bummed about the news, but the eternal optimist Chris Tickle wants Cruz to know “that he has us now.” And I think we all know how great of a comfort that must be.

We cut to Proctor’s training and Coach Faber knows that beating Vick will be no easy task. He calls him a “wildcard” and is not sure what the full depth of his skills really are. Despite this, they still organize a gameplan based on getting close, smothering Vick’s reach advantage and going for the takedown. 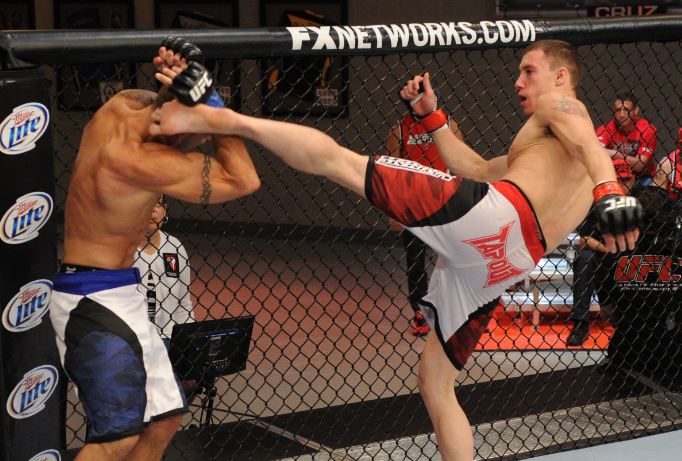 We proceed directly to the fight and Proctor fails to execute his gameplan in the first round. Vick pops his jab at will and Proctor continuously moves backwards. He throws a lot of overhand rights at Vick, but the majority of them miss their mark. This continues for the rest of the round Vick takes the first no problem.

In round two, Proctor knows it’s do or die time and comes out much more aggressively. He finally starts to follow the gameplan and closes the gap and his punches start to find their mark. At the 3:45 mark, Vick gets caught in what could best be described as a rear naked choke/WWE sleep hold hybrid. Despite the awkward angle of the choke, it’s deep and it looks like the fight might soon end. Vick is able to escape, though, and round two ends. Vick winds up winning the decision and moves on to the semifinals.

The focus then shifts to the second match of the night between Michael Chiesa and Justin Lawrence. Faber wants to exploit the reach advantage on the standup, but Chiesa wants to bring this to the ground. He says that Lawrence’s ground game “sucks.” Urijah takes a more diplomatic stance saying that, “I don’t think his ground game sucks, but it isn’t very good.” Chiesa also brings more of an edge this fight saying that Lawrence has put himself on a pedestal and he wants to knock him off it.

In the next scene, you see exactly what he means. Lawrence talks about how everyone calls him a natural athlete, but he’s had to work hard to get to where he is. It’s not so much what he says, but how he says it. You can’t help but think, “Wow, I’d really like to see this guy get punched in the face.” Well, either that or you hope that he’ll gain 40 lbs and they bring back the show COPS just so you can see him get arrested wearing jean shorts with his shirt off. 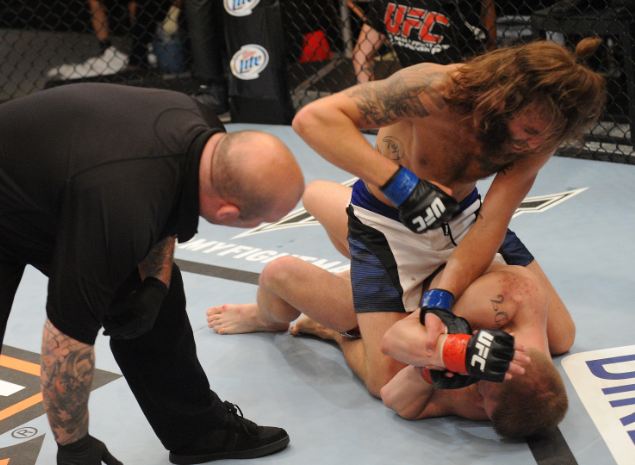 Round one begins with Lawrence immediately throwing kick and losing his balance. Chiesa jumps on this opportunity and ties him up. He soon gets behind Lawrence and jumps in his back to bring him down. Lawrence is able to turn over and get in Chiesa’s guard. Despite being on his back Chiesa throws up multiple submission attempts including armbars, triangles chokes and kimuras. A lot of them come close and Coach Cruz yells at Lawrence to “get out of there!” He’s unable to follow the advice as Chiesa locks in a triangle and starts to throw some elbows. Fortunately for Lawrence, the bell rings and he lives to see the second round.

Round two allows Lawrence to showcase his superiority in the standup game. He tags Chiesa and avoids getting to the ground once he decides to focus on his boxing and stops throwing kicks. With one minute left, he drops Chiesa with a couple body shots, but then foolishly rushes into his guard. Chiesa is able to hold on to him, recover and wait out the end of the round.

The “sudden victory” round sees Lawrence get an early takedown, but he is soon reversed by an elementary jiu jitsu sweep. This puts Chiesa in full mount and Lawrence is too winded to put up a decent defense as Chiesa ground and pounds his way into the semifinals.

After the obligatory Jon Anik post fight interview we then get next week’s matchups. The third quarterfinal fight will pit Vinc “too cool for the letter e” Pichel against Chris Saunders. The fourth and final fight will be a a match between teammates and guys that talk funny as England's Andy Ogle takes on Lawn Guyland's Al Iaquinta. How will Dominick Cruz’s injury affect his coaching? Will Team Faber be torn apart by having teammates fight? Will a fighter FINALLY urinate on someone/something? Find out this and more, next week on The Ultimate Fighter: Live!

In the meantime, follow me on Twitter @dannyboydownes, the show @InsideTUF and catch my blog here. Also, be sure to leave some comments on the article. I’d as for suggestions, but when you’re already the #1 internet recap column written by a UFC veteran concerning an MMA-based reality show which airs on FX Friday evenings, there isn’t much room for improvement.